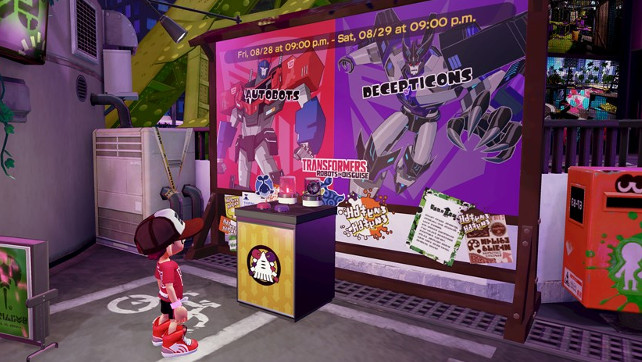 After a series of Cats vs Dogs splatfests, the ante is about to be upped in the next round with a joined venture between Nintendo and Hasbro. Are you team Autobot or team Decepticon?

Nintendo and Hasbro are joining forces to help you defend your robot allegiances in the Splatoon game for the Wii U console.

Splatoon features themed events called Splatfests that let players pick a preference, such as Autobots or Decepticons, and then compete against the opposing side in online battles. A Splatfest celebration lasts for 24 hours, during which players head into battle and try to rack up Turf War wins for their side. While the Splatfest is ongoing, in-game characters get to wear a special T-shirt that shows which Transformers team has their allegiance. The ink that each team shoots will also be customized to match the color scheme of the chosen side.

Once a Splatfest ends, the side with the most points will be awarded the most Super Sea Snails, items that will allow them to upgrade their gear in the game. The Transformers-themed Splatfest event is scheduled to run starting at 9 p.m. PT on Aug. 28 through 9 p.m. PT on Aug. 29 and is open to all Wii U owners who have Splatoon and an Internet connection.