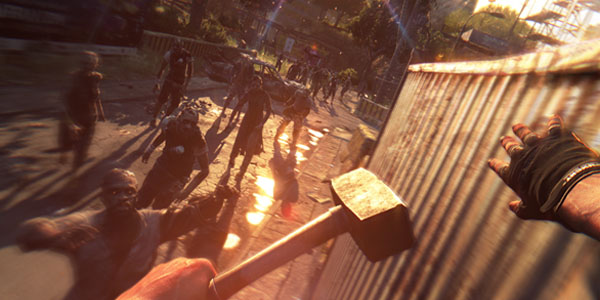 Just released yesterday, the zombie infested city parkour adventure Dying Light is quite an unique title. The game vaguely feels like a free roam version of Mirror’s Edge with some Dead Rising mixed in. This creates some amazing experiences that can relate to the games quite unbelievable, however accurate, gameplay trailer. There’s nothing quite like running down an alleyway on your way to a mission, then stopping dead when you come to a street full of shambling zombies. What do you do? Take to the roof tops? Climb the nearest bus to avoid their attacks? Or just run head long and dodge your way through the horde? It’s the encouragement of those sorts of instant decisions that make Dying Light so interesting.

Sure there are story missions to follow, and people to help out as well. The few missions I’ve played so far have been enjoyable. Interestingly, supply drops as shown in the gameplay trailer seem to happen decently often throughout the day. On consoles, you’ll feel your controller shake to tell you a cargo plane is flying over. At least once while chasing one down while not on a mission, I also came across a survivor in need of help. However, since I hadn’t collected a drop successfully yet, I ignored them. I don’t know how often the two choices are combined, but it was neat to see it happen in free roam.

The game starts in the slums, which is quite an area to be leaping around. There are quite a few different locations to wander past and many boxes to collect items from. I’m not sure, but basic pickups that aren’t weapons haven’t filled up my inventory yet. I don’t know if they do. You can only carry a specific number of weapons though, but an early skill tree unlock allows you to carry more. Weapons themselves work similar to Dead Rising with durability. You can repair them a bit, but eventually they will break. Though they do stay in your inventory.

Simply put, the joy of Dying Light comes from focusing on the task at hand. You’ll be running towards your current location and just throw yourself into a situation that needs to be dealt with. Once I ran into a bus depot. Completely playing attention to my goal, I ran into the actual depot building and realized that the horde outside was also on the other side of the building. Sure I was able to shove my way past them, but that’s where exploration comes in. Could I have missed a slew of items in the area? Sure! However, I’d have to deal with all those zombies in the meantime.

It really is all about the situations you end up in. Another time I was up on an elevated highway. There was just one zombie around, so I figured I’d practice my fighting skills on him. You do actually gain points towards fighting, survival, and agility separately. So why not? After taking care of him though, which was quite a battle, another zombie had heard the action or at least wandered by. This continued on until quite a strong guy wandered into the fray and forced me to finally give up and continue my current mission.

So far I’m really enjoying myself! At times some of the climbing in missions can seem confusing when you’re unsure of where to lift yourself up. However that could just be experience. As the game progresses, it’ll probably easier to pick out the objects you’re expected to climb. Stay tuned for our full review!