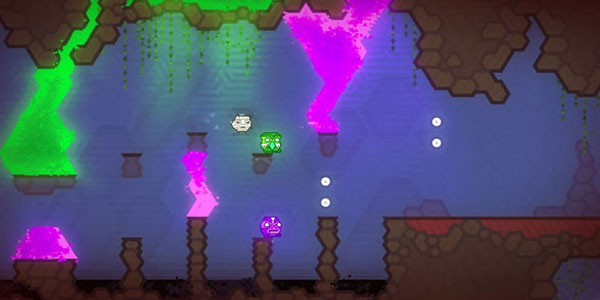 Press Play’s two character platform puzzler is quite enjoyable! In a weird way it kind of evokes feelings of playing Portal, in the sense of twisting the game mechanics to complete puzzles. It’s a deceptively complex concept that adds new elements at a steady pace to keep things interesting.

We had a chance to take Kalimba out for a test drive and what follows is impressions from the beta build of the game.

Gamers control two characters at the same time. This usually forces you to pay attention to the one in the most danger at the time and focus on them, hoping that the other is out of harms way. However the game isn’t always action based. There are times you’ll be able to ponder what you can do with the mechanics to progress in the levels. Others, you’ll usually get a pretty fair checkpoint to keep replaying parts over and over while you try to figure out what to do next.

It’s quite challenging at times, and that’s what makes it fun. You do occasionally get that sense of something being impossible, and it truly feels good to overcome these obstacles. I don’t want to spoil much because it is neat to come across these situations on your own. The main focus is that the two colors, green and purple, come into play as being important to switch between. This is the first step in mixing up the games mechanics. Finally, much of what you learn in the first several levels leads you into a boss battle. That’s where the demo wraps up.

The story is told by narrator Hobear, who tells the tale of a Shaman who is killed by an evil force. The totem pole of the Kalimba people was also shattered in this attack. Her spirit seems to be what is controlling the two totem characters you play as. Each level ends with you collecting another piece of the totem pole. Depending on how many collectables you get during the level also gives you a spiffier totem part in return, the best being golden.

There are secret mini game levels to discover as well. The first of which I did okay on, and the other two I admitted defeat. It seems you can potentially replay these from the menu after unlocking them.

Lastly the characterization of the two totems is done well in the sounds that they make. There were many times that I found myself making the same exasperations as the characters in the game when they were presented with new challenges. It’s a nice touch. As is the music in game.

Kalimba is being launched December 17th on Xbox One for only $9.99, and then will be reaching the PC very early in the new year.