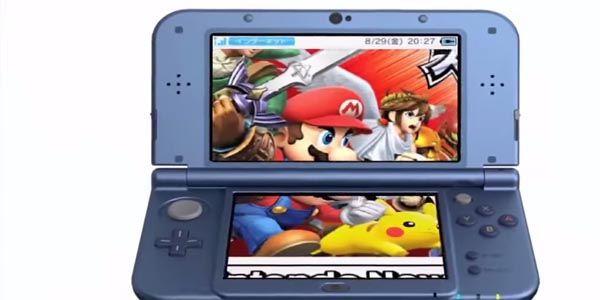 In a surprise announcement I’m sure no one saw coming, Nintendo announced a brand new 3DS model last week.  Sporting several new improvements including a faster processor under the hood, two additional shoulder buttons and a second analog input in the form of a C-Stick – the new 3DS is bound to win over some fans.

Nintendo is clearly taking a page from Apple’s playbook with this announcement, as all of their marketing material refers to is upgraded 3DS not as a new console but as the “New 3DS”.  It has been confirmed that the handheld will be available in Japan this holiday season and in Europe and North America some time in 2015.  Pricing will be similar to that of the existing 3DS & 3DS XL, running for approximately $160 USD / $199 USD when the New 3DS launches in Japan this fall.

In addition to the added shoulder buttons and faster processor the New 3DS is also capable of NFC (near field communication), which is also found in the Wii U Gamepad. This feature will presumably be used for the upcoming Amiibo line of figures Nintendo will be rolling out with its first party games during 2014 / 2015. The New 3DS is also compatible with Micro-SD and features an improved 3D feature, the original 3DS required the user to place the system in a “sweet spot” in order to reap the full benefit of the systems unique 3D gameplay.

It was also confirmed earlier this week that the New 3DS will be region-locked in a similar fashion to the existing 3DS and Wii-U. This means that titles released in Europe & Japan will not be playable in North America, for example. Region locking is of great concern for European and Australian gamers due to the fact that it can take months (or years) for games to see release when compared to their North American and Japanese counterparts.

We’ll have more information on the New 3DS as it becomes available, for now check out the brief preview video than in tender released last week below.