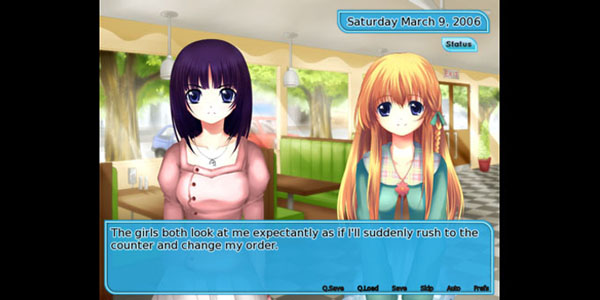 Dating Sims are a sort of game you can really just sit back and enjoy. Sometimes they play out like Visual Novels and just let you read along with the story. Otherwise like Fading Hearts give you choices as you get further in that allow you to craft the story to your liking… Or just ignore it altogether and slay monsters in the woods with Dragon Quest like combat. I’m only a little ways in so far, but it seems like a game I’ll be spending quite some time with. Especially with different choices to explore.In general, dating sim games tend to have interesting events going on. You’re not just going up to girls and flirting them up. Things happen and progress the story as you play. So far I haven’t spent much time actually dating in Fading Hearts to be honest. More so I’ve learned about what is going on locally and some drama between my friends. There’s nothing wrong with that. After all, perhaps other choices would have had my character in a relationship sooner.

There are other factors to consider as well in game. Like earning money by deciding to do work on your computer and what you want to do each day. Really it’s a life simulator. As mentioned initially you can ignore the storyline and just wander into the woods and fight these shadow monsters that are out there.

It’s a relaxed paced game with some good writing. Of course I’ll have a review down the road but for now I’m enjoying the journey.

Fading Hearts is available on Steam and other online stores for $14.99