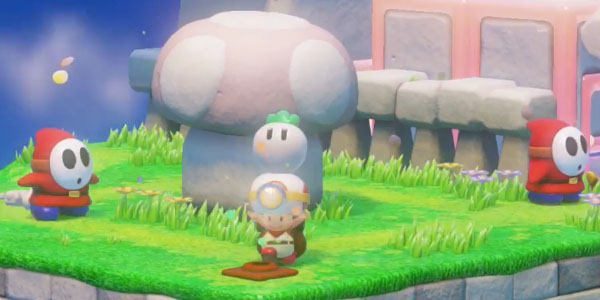 I would LOVE a new Super Mario Bros. 2 USA version (Doki Doki Panic) game. The content in NES Remix 2 that allowed you to pick up blocks as Toad in both Zelda II: The Adventure of Link and Kirby’s Adventure brought back so many good memories. Shy Guy and Birdo are both still around even! Now, in the latest title Captain Toad: Treasure Tracker for the Wii-U that spins off from Super Mario 3D World, you can even pluck turnips to throw at enemies? I’m in love! Read on for the trailer!

So what other cool features did Nintendo just show at E3? A boss battle where you seemingly wind your way up a cavern or volcano, plucking planted coins like in Mario 2, as well as dodging behind rock walls to avoid a huge dinosaur or dragons fireball breath. What else? There are ghost houses now too that involve doors that spit you out in different locations. Also there is a mine cart level where, yes indeed, you get to throw turnips at enemies you pass and they can collect coins for you as well.