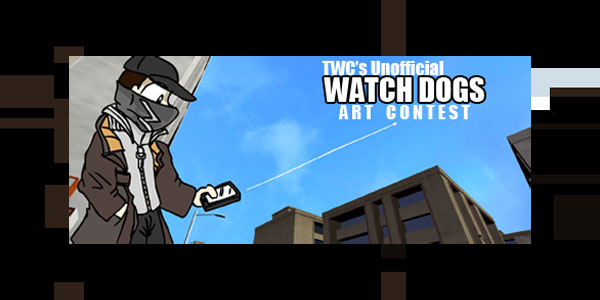 Want to snag a copy of Ubisoft’s new hit game for free? Well Top Web Comics has just launched a unofficial contest to let web comic creators do just that! All they need to enter is draw up one of their own characters as Watch Dogs’ Aiden Pearce along with some other specifics. Later on into May, fans will vote for their favorite entry and two lucky winners will each get a copy of the game! How cool is that? Let all your web comic friends know! Who knows, they could be one of the big winners! Read on for more details.

Top Web Comics recently merged with Basto Media. In this merger, contests are one of many new improvements to the site that have arisen. Last month featured a wacky concept of having web comic characters, a hippo, and a pumpkin, at the creators vision of the gates of Heaven. Into May they’re asking creators to focus on drawing one of their characters, dressed as Watch Dogs star Aiden Pearce, hacking something in an urban setting. From the sounds of it and after last months contest, the wackier the better is the way to go!

So all contestants need to do is get more votes on their entry than everyone else. Even after voting begins though, other entries are still accepted. If you have any friends who are web comic juggernauts, they’d still very much have a chance even after voting starts. The top two winners will each receive a copy of Watch Dogs for the system of their choice.

How cool is that? So put your art skills to the test, or tell someone who can, and they could score themselves a copy of Ubisoft’s new game!

Entrants use a free TWC login to submit their contest entry via their admin page.

For more details and to view entries as they come in, check out The Unofficial Watch Dogs Art Contest.