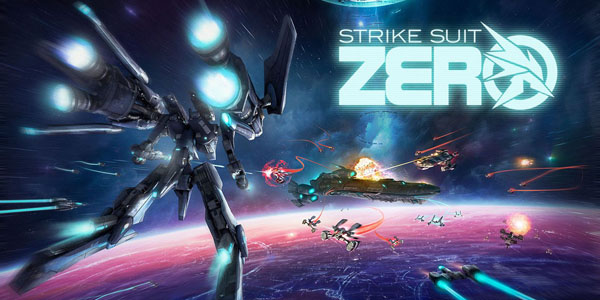 If you’re a fan of space combat sims and want a game to just track some fighters and destroy the daylights out of them, Strike Suit Zero: Directors Cut has a fun collection of missions. There is a deep and rich lore to the game as well, which is delivered via dialogue while you’re in and out of combat. This keeps the story progression entertaining while you’re busy trying to blast your rivals.

The directors cut is an improved version of the original game which unfortunately I never had a chance to play. From what I’ve read, improved controls, rebalancing and some additional missions available before as DLC are included. Apparently you get into the Strike Suit ship a lot faster too, which basically allows you to switch into a mecha mode with missile barrage capabilities for awhile using “flux” energy which you gained over time or faster in combat. Otherwise the ship reverts to a stardard space craft fighter. You can swap between these two modes too, which his a nice feature.

I’ve seen others who didn’t care much for the story, but I find it to be one of Strike Suit Zero‘s stronger suits. It isn’t amazing, but it’s an enjoyable war story in space. It’s interesting that instead of playing as the colonial outlanders who have settled planets away from Earth, you’re actually playing on the side of our planet to defend it. This all stems from something that was discovered and then taken away by the colonists. With the Earth taking away the colonists right to free rule, it seems war is coming to our solar system.

Don’t get me wrong, on it’s own this is a good premise and fun combat. However there are down sides to the game that make the game a bit frustrating. Just before review, one of the things I noticed today was that you can lock onto turrets on the opposite side of huge battle class ships. The issue with this is you’ll go in for a big dramatic strafing run, seeing your reticule turn red, and end up just firing into the opposite side of the hull, realizing as you approach that you’re not hitting your target. Yes, there is a distance indicator which helps towards this, but it’s down in the bottom left. It may have been more helpful to be on your targeting icon so you can see ships distance as you close in. This makes smaller fighters a bit of a challenge too because you’re not sure at times if you’re heading your way or away from you. 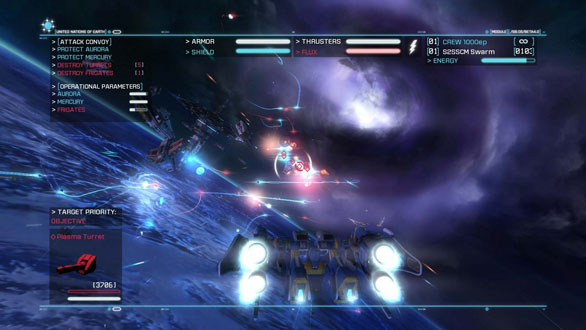 One thing which is strangely absent is a radar. Which isn’t that bad since the HUD does display red arrows pointing to your foes, but it does mean at first you’ll need to swivel around and figure out where the enemies are coming in from. I don’t think it tracks them if they’re too far out of range. Sure, you’ll soon be swarmed by them and in a furious firefight anyway, but it would really help to focus the battle if you could see where the majority of the ships are.

Also, I’m not sure if there is an indicator for it, but torpedo launches are sometimes difficult to notice. Worst off, sometimes they can be quite close to their target and plentiful. Instead of targeting, I found myself just spraying shots toward the targets, hoping that I took them out. Your first encounter with ships like this is actually quite fun. You have ample time to react, even though I don’t think you are given a launch indication besides maybe dialogue notification of the first launch. 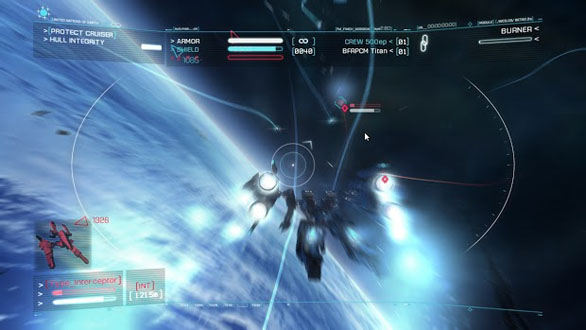 Despite these issues, it’s enjoyable flying in Strike Suit Zero. Really, if I was able to, I’d enjoy flying through various locations instead of the space combat. It’s quite responsive and fun. Using both joysticks you’re able to spin and aim easily. The game doesn’t auto level you out either, which is a good thing in the furious dogfights ahead. You can also swap between third person and cockpit view.

Visually, there is lots to see in Strike Suit Zero: Director’s Cut. It really does look nice and the frame rate does seem to be quite smooth most of the time, aside from maybe some slowdown when story cut scenes are loading. In general it’s quite beautiful. The enemies are clearly visible with red glows and your allies have blue exhaust streaming from their ships. Everything is so beautiful it would be nicer if there was more of a balance between ship speeds. You can slow your ship down, but it could be better if you didn’t usually zip past huge battle ships. Perhaps I’m playing wrong, but strafing runs are fast and furious in my play experience. Games like Star Wars: Shadows of the Empire had great moments where you could tag right along with a Star Destroyer and shoot away at it. Basically being able to fly all around the massive ship. In Strike Suit Zero, you’ll be torn to pieces rather quickly when approaching from most angles it seems. Again, maybe it’s just skill and I’m not good enough at the game yet. 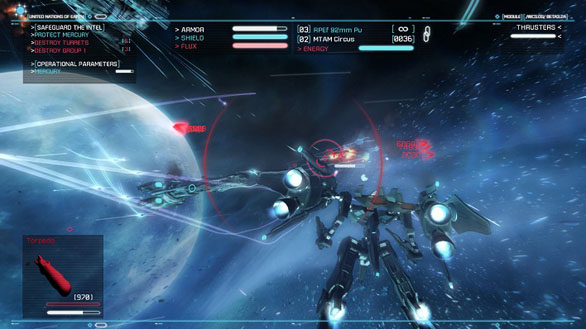 I’m not sure how the original handled missions, but you’re given a selection and briefing screen, unlocking new missions as you go. There are thirteen missions that tell the main story, and the included DLC adds five more which are historical simulations, allowing you to play as other pilots in any ship you’d prefer. Missions can be decently lengthy, so it does make in easy to hop in, try your latest mission, and then take a break if you’d prefer.

This is an enjoyable title with a decent spread of content for the $20 asking price. If you’re a big sci-fi space combat fan and enjoy the drama of dogfighting combat, this is for you. You’re free to fly about, find your targets,and destroy enemy ships as you see fit. I was spoiled by this more advanced version, having never played the original, but I’d say if you just want to blast some ships apart, this is a fun game you may enjoy. This next gen version will be available April 8th 2014 for PS4 and Xbox One with a PC version on it’s way down the road. 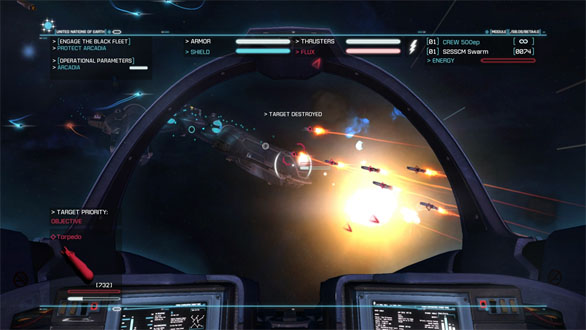