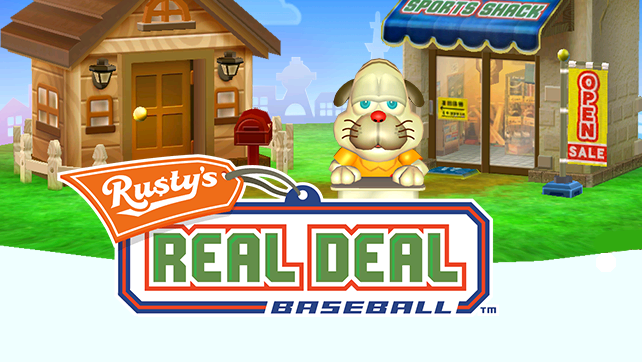 Celebrate the start of the baseball season with a collection of baseball-themed mini-games. You can even haggle with hilarious ol’ Rusty to lower the real-life price of additional batting, pitching and fielding mini-games in the Nintendo eShop. The custom-priced model of add-on content in Rusty’s Real Deal Baseball is part of the fun. How low will he go?

3D Super Monkey Ball action! Super Monkey Ball as you’ve never experienced before! Join AiAi and his friends as you tilt and roll your way in to the world of 3D! Lose yourself in each vibrant world as you twist, turn and aim to collect every banana in the fastest time possible. Then play together with friends and be the first to cross the finish line in Monkey Race or get ready for a manic melee in Monkey Fight. Everyone’s favorite monkeys are jumping out of the screen with crazy excitement. Are you ready to join the fun!?

Dozens of puzzles to solve. Thousands of unique items to find. Rumors surrounding the history of stately Ravenhearst Manor have circulated for decades. The recently acquired diary of Emma Ravenhearst may hold the key to unraveling the tale behind this unsettling place, yet the pages are missing. Players assume the role of Master Detective to unlock secrets held within Ravenhearst™, scouring a myriad of enchanting rooms in the manor for cleverly hidden clues. Locating and assembling diary pages helps tell the story of the house and, ultimately, unlock the mystery.

Explore the town of Dire Grove – A mystery 1000 of years old The Celtic legend of Dire Grove has been passed down from generation to generation for centuries. Considered a fairytale, its telling was common at campfires and as a bedtime story meant to frighten small children into staying in their beds through the night. However, a recently unearthed artifact in the United Kingdom corroborates the legend and so begins a journey of survival for a small band of graduate students in the secluded resort of Dire Grove.

Buy Dr. Mario, get $5 off Dr. Luigi in the Nintendo eShop for a limited time

Is there a doctor in the house? How about two? If you buy or already own the classic puzzle game Dr. Mario from the Virtual Console service in the Nintendo eShop on the Wii U console, you can get $5 off the purchase price of its sibling game Dr. Luigi in the Nintendo eShop starting today at 9 a.m. PT until April 10 at 8:59 a.m. PT.

Set off to conquer the vast ocean with Evofish! Evolve from prey to predator in the immensity of the seas, and progress to the top of the food chain! Survive against an increasingly dangerous host of enemies and evolve one of the 4 heroes by eating the weaker fish. Become the most fearsome predator in this hostile environment – enjoy hours of gameplay fun as you work your way up to be the master of the ocean. In Party mode, compete against or collaborate with 2 – 5 players in one of the 3 multiplayer modes in long and thrilling gaming sessions with friends! Single Player Mode: Simple and effective gameplay: eat or be eaten, Several different species each with their own characteristics, Collect numerous bonuses and complete various missions, A game world and enemies that evolve with each new level. Party Mode: 2 – 5 players, 3 game modes for extra gameplay fun, Compete or collaborate to survive, Innovative, asynchronous game modes

April is a month to remember with classic games launching each week! Experience classic Metroid game play as Samus explores the secret passages of a massive research station teeming with hostile life forms. Master moves such as clinging to ledges, leaping to high ladders and firing new weapons like Diffusion Missiles. Along the way, collect iconic power-ups like the Morph Ball, Screw Attack and Wave Beam. All these skills will be useful when you encounter the SA-X, an unstoppable “dark” version of Samus who is on the loose and could be just around the corner.

April is a month to remember with classic games launching each week! In the face of invasion, you have been assigned as the tactical adviser to the Orange Star Army. Command 18 different types of ground, air and naval units if you hope to survive the coming wars. Take note of the terrain and weather as you lead your forces in 114 maps of turn-based warfare.

April is a month to remember with classic games launching each week! Prepare for an epic journey beyond the borders of the Mushroom Kingdom as Mario and Luigi team up for a hilarious, action-filled adventure. The evil Cackletta and her assistant, Fawful, stole Princess Peach’s voice, and Mario and Luigi will need to work together to get it back by visiting colorful worlds, finding hidden items and taking on enemies using a clever RPG battle system.