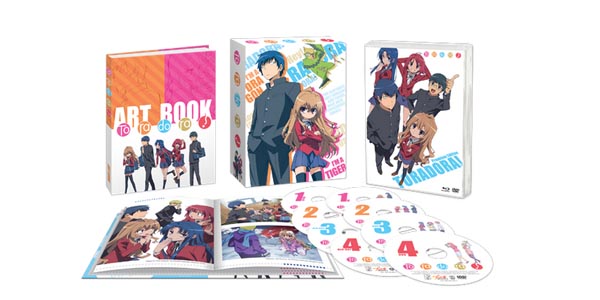 Toradora!, the fan favourite anime centered around Ryuji Takasu’s struggle with both his reputation as a delinquent and his infatuation with Minorin, one of the only girls who won’t flee from him is coming to North America. His only obstacle? Minorin’s best friend Taiga, who is known for her hot-headed temper. In order to sweep their crushes off their feet Ryuji and Taiga will have to team up and face a number of obstacles together.

NIS America will release two different version of Toradora! A standard will be made available along side a Premium Edition (pictured above) which includes 4 Blu-Ray / DVD discs, a hard cover art book and a special slip case.  You can snag either by visiting RightStuf or by checking out NIS’ own online store.

I was originally introduced to Toradora back in ’09 while attending Anime North here in Toronto. I found that it had just the right mixture of romantic intriguing and comedy to keep me coming back for more. At 25 episodes the series had a full run in 2008, with an OAV episode arriving in 2011. If you haven’t checked out the tale of Ryuji and Taiga I highly suggest that you do.