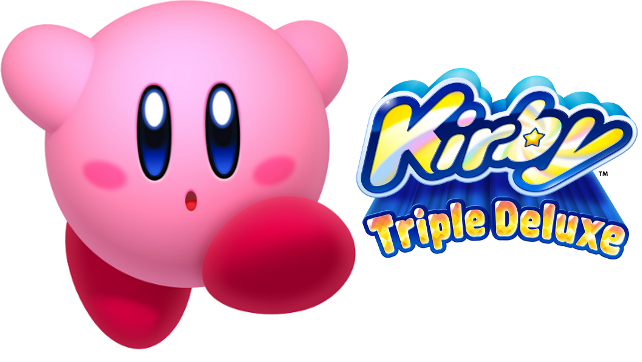 Nintendo’s newest Kirby title, Kirby: Triple Deluxe, has been announced to be released this May alongside Mario Golf with both titles hitting retail stores and the Nintendo 3DS eShop on May 2nd.

The game includes a few new features and also a huge number of collectibles for players to find, from hidden 8-bit keychains to Sun Stones. The game takes advantage of the StreetPass feature to deliver better items to players. Devour trees, obstacles, and huge chunks of stages with Kirby’s Hypernova ability and inhale enemies to copy epic new moves like Archer. It’s a grand new Kirby adventure PLUS a new multiplayer battle mode, Kirby Fighters!

When a mysterious being kidnaps King Dedede atop a giant Dreamstalk, only Kirby can save the day! Jump from the foreground to the background in dynamic 3D side-scrolling environments while using new and returning copy abilities to defeat enemies. Duke it out in Kirby Fighters, a fierce 4-player* battle mode where you fight using a chosen ability like Sword or Ninja. The last Kirby standing reigns supreme. Whether you’re new to Kirby or an old fan, the Kirby: Triple Deluxe game offers a triple threat—action, adventure, and a battle mode!

Some of the new and returning abilities in the game include Archer which allows Kirby to wield a bow to strike silently from a distance, Beetle in which Kirby grabs foes with his horn and slams them into the ground. There is also Fire where Kirby can roll into a fireball and scorch through the air and Sword where Kirby dons a green cap and wields a sword. Remind you of anyone?

Kirby Fighters, a battle mode for up to 4 players, can be accessed with Download Play. You can also sharpen your skills by playing solo. Other game modes include Dedede’s Drum Dash and Arena.

What do you think? Are you looking forward to the newest Kirby?