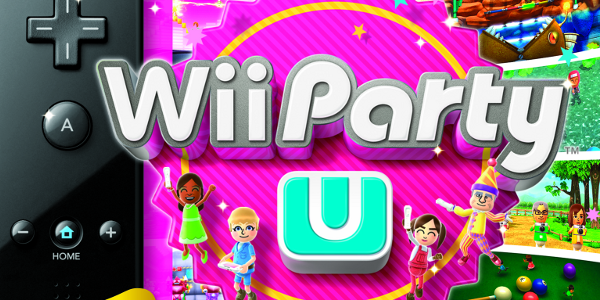 It’s time for a Wii U Party.

Tomorrow the Wii Party U game launches for the Wii U, bringing with it more than 80 mini-games, multiple party modes for people of all ages and unique game play that shows off the creative power of the Wii U GamePad controller. The game offers a party for every kind of player – from board games centered on the television to tabletop games that can be played exclusively on the GamePad (no TV required!). Wii Party U turns any living room into a party.

“Call your family and friends and start planning your Wii Party U party now,” said Scott Moffitt, Nintendo of America’s executive vice president of Sales & Marketing. “The game is another classic Nintendo experience that will have people laughing and smiling with every new original activity.”

TV Party Mode: Players can get comfortable on the couch as they compete with family and friends in board game-style games using the GamePad and Wii Remote controllers. Players take turns and move toward a goal on several different boards, playing a ton of fun mini-games along the way. One to four players can participate in this mode that combines both chance and skill.

House Party Mode: The physical and mental games featured in this mode change based on who is playing – new personalities create new experiences. “Button Smashers” has players working together to press a series of buttons on the GamePad and Wii Remote controllers. In “Name That Face,” one player takes a picture of his or her funny face using the GamePad camera, and the other players have to guess the expression. All the games in this mode make for a wild party.

GamePad Party Mode: In a unique twist to normal game play, GamePad Party Mode asks players to turn off the TV and put their eyes (and fingers) on the Wii U GamePad controller. This mode offers games that are played exclusively on the GamePad. Players take part in such classic games like “foosball” and “slot-car racing,” and using the included Wii U GamePad horizontal stand keeps the GamePad level for standalone GamePad game play.

In addition to the three main party modes, Wii Party U features many other modes that let players select quick-play mini-game challenges, receive activity suggestions based on the current number of players and view archives that display records and Amazing Feats. Players with broadband Internet access can even access Miiverse to rate specific mini-games, view other players’ ratings and leave comments or draw pictures.

Wii Party U comes bundled with a Wii Remote Plus controller and the GamePad horizontal stand, all at a suggested retail price of $49.99.

For more information about Wii Party U, visit http://wiipartyu.nintendo.com.