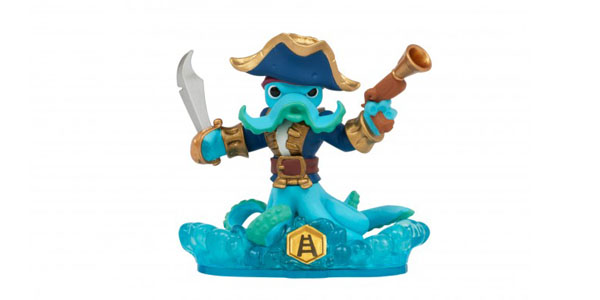 You’ve already been to the stores, found all the Swap Force figures you’ve been looking for (hopefully) and set up your Skylanders army for the new game before their mighty portal of power! So what exactly do those new swapable figures do? I’m glad you asked. After the break I’ll go into detail what the new figures are like, and what their powers do.

The characters themselves are their upper halves. You can almost think of the bottom parts as vehicles in a way. All of the leveling data for your character is stored in relation to the upper half. So Wash Buckler for example, who comes with Skylanders console versions, is basically the character “Wash” in the upper half. An octopus pirate. The lower half is Buckler, a tentacle mode of transportation that players can buy skills for seperately and also use in new Swap Zone events.

Swap Zones, going back to our example of Wash Buckler who has a climbing ability, are split up into eight different categories. Much like the elements from the first two games, Swap Force now has these Swap Zone challenges that encourage you to collect at least half of the new Swap Force swappable characters. Of course you don’t need them to complete the game. These are bonus missions that usually reward you with treasure. They are fun mini games though and in the sense of the climbing ability, you scale a wall with constantly falling objects to avoid while trying to reach the top. There’s coins to collect along the way, as well as three medalions or such that net you extra treasure at the end.

Top half characters can wear stat boosting hats as well. So when you get a new hat, it carries over along with that upper half. In a cute twist, Wash does actually mention when you change hats asking, “Where’s my pirate hat?”

Does it work well? Yes! Magnets keep the pace flowing well while you’re changing characters. You’ll probably favour a specific top half if you’re just looking to do Swap Zone challenges and be changing their lower half out as you progress. Alternatively, there are dual element gates now. These can be opened in multiplayer by having a Skylander of both elements in play. They can also be opened by having a Swap Force swappable character with the correct elements on their upper and lower halves. Elements do carry over, so Wash will always be a water based element, and his lower half, lets say from Blast Zone which is fire, can make him a water/fire figure. The first level actually contains a gate that can be opened using your starter pack characters. When swapped like this, the seperate parts names become combined as well. So Wash Bucker and Blast Zone swap to Wash Zone and Blast Buckler. Which leads to your hundreds of combinations you can do with the sixteen Swap Force swappables.