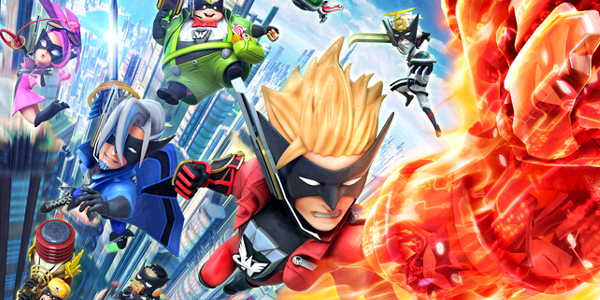 The DSiWare service sees a boost today with three new titles, including two edutainment titles. The games, all from Enjoy Gaming Ltd, are Letter Challenge, Tales to Enjoy! Little Red Riding Hood and Tales to Enjoy! Puss in Boots.

Nintendo’s hotly anticipated The Wonderful 101 will also hit store shelves and the Wii U eShop this Sunday and is included in the download. Zelda II: The Adventures of Link also arrives on the Wii U Virtual Console.

Over on the 3DS the demo for Atlus’ next RPG Etrian Odyssey Untold: The Millennium Girl gets the demo treatment on Monday while a new 3DS Virtual Console title has also been released with Techmo Bowl arriving.

Strength in Numbers As Wonder Red, leader of the Wonderful 100, you will unite your band of Wonderful Ones to morph into powerful transformations such as a fist, sword, glider, gun, and more to battle invaders throughout Blossom City and across the world. The Wonderful 100—and YOU—are the city’s best weapon.

– Unite your horde of heroes and morph into powerful weapons to crush the invaders, or synthesize into bridges, chains, and other objects that help you move through the world’s different environments.
– Explore each stage to find helpless citizens and empower them by enlisting them to join your army of heroes. The more heroes you gather, the more powerful your Unite Morphs will become.
– Clobber bad guys with fast-paced, engaging combat. String together combos, dynamically switch between Unite Morphs, evade and defend against alien attacks, and rack up points to earn the best scores and rewards.

It’s up to you and your team of superheroes to take on colossal robots and alien masterminds bent on obliterating everything in their path. But don’t worry—you’re not alone! (Available September 15th)

Zelda II – The Adventure of Link

The Hyrule fantasy continues… Link returns to Hyrule to search for the Triforce and to awaken Zelda from an endless sleep. Embark on a quest to find the Triforce of Courage and save Hyrule from ruin. Learn magic spells, talk to people in towns to get clues, collect items to increase your power, and explore six palaces where the underlings of the evil Ganon await you. This sequel to the adventure classic uses a side-scrolling visual engine unique to the series for more technical combat, and it features more in-depth world roaming as Link encounters townsfolk while on his quest.

Toki Tori 2+ is a Metroidvania style puzzle adventure. There are no tutorials, there’s no hand-holding, no-one tells you what to do in Toki Tori 2+. The fun is in exploring and overcoming the obstacles of the lush forest island on your own merit.

Our unlikely yellow hero may be the star of the show, but he won’t get anywhere without the creatures he meets along the way. Armed with just the Whistle and Stomp moves, he can influence and make use of these strange creatures’ unique abilities.

But what’s up with that black goo? It’s threatening your home world! Your goal is get to the core of the corruption and save the island!

– Explore a beautiful, Metroidvania style open world.
– Discover how to interact with the creatures in your environment.
– Use the GamePad as a camera and snap photos of creatures for the Tokidex.
– Play on the Wii U GamePad, or use the second screen for extra info.
– Follow the path, or stray off-road and tackle the expert puzzles.

Toki Tori 2+ is huge. We dare you to find all it has to offer!

Strap on your helmet for the ultimate game of guts and glory! Match your gridiron skills against the computer or another human player. From the snap, total control of every pass, run, and tackle is in your hands! The player can select from 12 teams. On offense there are two run and two pass plays to choose from. Defense consists of trying to guess which offensive play the opponent will select and then taking control of one of the defensive players before the snap. A simple power-meter system is used for kicking field goals, extra points, and punts.

Etria is a land that has long welcomed explorers…yet even they will discover stories untold.

Uncover the truth behind the labyrinth that swallows all. By choosing first to immerse yourself in Story mode, you will encounter the maiden who has lived a thousand years and the growing mystery that surrounds her past—a past that may affect the present and future of Etria.

Should you brave Classic mode, you will experience the beautifully upgraded version of the original Etrian Odyssey adventure, with new 3D graphics and gameplay improvements as seen in Etrian Odyssey IV, as well as a fully orchestrated BGM to accompany your journey. Scour through the dungeon’s many layers and fend off the unknown to discover the truth behind the Yggdrasil Tree.

Choosing either mode will unravel the engrossing tale that signaled the start of the grand Etrian Odyssey series. How will the newest generation of explorers fare in unearthing Etria’s latest tale?

A super BIG sale for a super little game. Get your acorns stashed for winter in this awesome platform adventure. Starting Sept. 13, download Super Little Acorns 3D Turbo in the Nintendo eShop on Nintendo 3DS™ at a discounted price of $3.99 until 9 a.m. PT on Oct. 2. Check out the Darkain Arts Gamers’ review of this game!

Bike Rider DX is a platform-action game with tons of power-ups, fun gimmicks and a large variety of stages. Simple controls and multiple modes provide fun for both newcomers and experienced gamers. Download Bike Rider DX in the Nintendo eShop on Nintendo 3DS at a discounted price of $2.99 until 9 a.m. PT on Oct. 10.

Test your brain with Letter Challenge! A fantastic collection of four of the best classic word games that will keep your gray matter busy for hours and hours!

Includes fast paced favorites like WordBlast and Pickletter and updated versions of Hangman and Wordfinder – the very best “pick-up-and-play” word games with “challenge mode” and over 100,000 words to that can even educate and take your word puzzle experience to a different level!

Tales to Enjoy! Little Red Riding Hood is one of a collection of Interactive Stories for young children. Each book is filled with features to entertain children while helping them to learn and stimulate their imagination.

The game is a series of interactive activities based around the theme of the story about a little girl who decides to visit her grandmother who lives in the forest. Beware you may shout…. of the wolf who is looking upon Little Red Riding Hood as a main course for his next meal!

– An easy to use interface allows the youngest of children to navigate through choices as the entire interface is voice-over guided.
– In one of the modes “Tell your own tale,” children can animate all objects in the story world and either tell the story or invent one of their own.
– Increasing difficulty of the minigames
– Interactive classic story
– Voice-over guided interface and storytelling for the youngest children
– Studio recorded voice over’s with professional actors

Tales to Enjoy! Puss In Boots

Tales to Enjoy! Puss In Boots is one of a collection of Interactive Stories for young children. Each book is filled with features to entertain children while helping them to learn and stimulate their imagination.

The game is a series of interactive activities based around the theme of the story about a smart cat helping his master rise in status to marry the daughter of the king.

– An easy to use interface allows the youngest of children to navigate through choices as the entire interface is voice-over guided.
– In one of the modes “Tell your own tale,” children can animate all objects in the story world and either tell the story or invent one of their own.
– Increasing difficulty of the minigames
– Interactive classic story
– Voice-over guided interface and storytelling for the youngest children
– Studio recorded voice over’s with professional actors