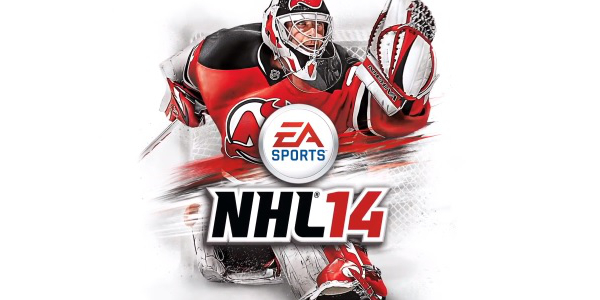 Aside from demos, I haven’t played a full edition of EA’s NHL series since way back in NHL 07. That’s a long time to be away, though I have played that game an awful lot. The newest game in the series, aptly titled NHL 14, continues on with everything that I thought was great in that game and builds upon it to make an even greater game.

Included in NHL 14 are a few new modes as well as the franchise’s continual advancement of existing features.

One of the new modes is in celebration of the 20th anniversary of NHL ’94, which was released twenty years ago for the SNES and Sega Genesis. NHL ’94 Anniversary Mode is a new way to get into old-school NHL action.

Rather than a complete throwback with old-school 16-bit graphics, the mode is built within the NHL 14 game engine. The mode also offers nods to its hockey video gaming roots through a retro presentation style, including blue ice, classic star-shaped player indicators, organ music and much more. If you’ve played much of NHL ’94 like I have this presentation is very much fun to see and play.

Plus the return of classic simple controls is great, and has become my default controls in the game. 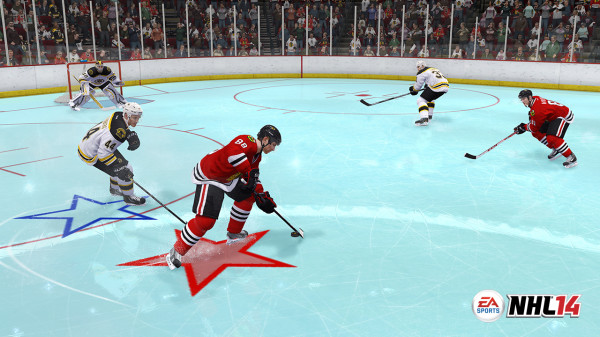 I absolutely love the old-school controls, and as much as the skill stick works great, it doesn’t with the way I play the game. In the game you use the left analogue stick to move your player around the ice. With the right stick you tap up to take a wrist shot, pull down and then tap up to make a slap shot, and you move the stick left or right to deke with the puck.

If you are playing the game with the net at the top of the screen with the action moving up and down this works very well. I tend to play the game in true broadcast mode (I’m a TV nut) so that the action looks as close to watching the game on television as possible. With this in mind a wrist shot is more left/diagonally left-up or wherever the net is in relation to my player. More often than not I end up misfiring.

Regardless, the controls are tight and very intuitive. I just prefer the old-school controls.

The basics of shooting with ‘94 controls gives you one button to shoot, one to pass, change player and initiate a fight. Plain and simple. If you’re looking for some simple game time without needing to learn complex and deep control setups this is the way to go.

The fighting system has also been enhanced for NHL 14 with a new ways to control the fights as well as how they are initiated and the results of those fights.

Making use of technology from EA’s other franchise Fight Night, the fights take place in a third person perspective and directly from gameplay with no cuts involved. Using the left stick you can push or pull on your opponent’s jersey; you throw punches with the right stick. Timing is everything and avoiding a strike can give you a few good shots of your own. A take down more or less assures victory.

While you will be tossed in the box for fighting, a well timed fight can be used to fire up your teammates or get the home crowd on your side. Take care at how you behave on the ice as a cheap hit on the opposing team, or taking a shot after the whistle, will result in the other team coming for your head.

Visible damage has been added to fights, which is a nice touch, with the player taking the brunt of damage showing bruises or black eyes. 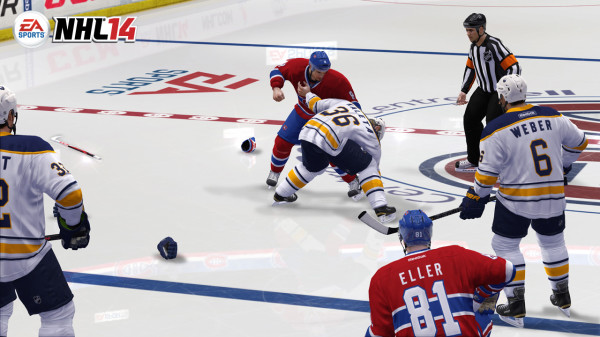 You can create a custom player as in previous versions of the game, who can be created in both genders. Creating your own player isn’t limited to name, uniform options and face; your equipment also plays a factor. The type of stick and the curve changes where your shots typically hit on net, and blade radius on skates affect agility, acceleration and speed.

You can then add your custom player to a team roster or embark in the brand new “Live the Life” mode.

This new mode allows your rookie to start in the minor CHL and work your way up to the NHL Draft, eventually being picked up by the pros.

There is a big difference in this new mode and it’s an amazing addition. Rather than having control over the whole team like you do in GM mode, you are literally in control of your player and only your player.

During the game, the view of which is locked into vertical mode with the nets at the top and bottom of the screen, you control your rookie on the line. So if you’re a control freak who needs to be the one with the puck all the time this will take some getting used to.

Also while you play, helper arrows are occasionally displayed on the ice to help you get into position. These help if you’re out of position, and will get you where you should be so that your team has proper coverage.

When your shift is over at the end of a play you will find yourself on the bench watching the game in first person mode with notes from the coach. You will get praise for things you did well, and also notes on things that weren’t so good about your performance. You may even receive direction from the coach about your playing, such as to clear space in front of the net, or score an early goal. When you’re on the ice and the coach wants you off the ice, a red circle will flash beside the bench to alert you. Simply skate into the circle and you’ll hit the bench.

If you take a penalty you will also get a nice first person view of the game from the penalty box, although you can also take this time to watch live updates and stats of the game until you’re on the ice again. Another neat little addition is if you lose or break your stick, you’ll be skating around without one until you make your way to the bench, where a teammate will be waiting with an outstretched stick to help you out. 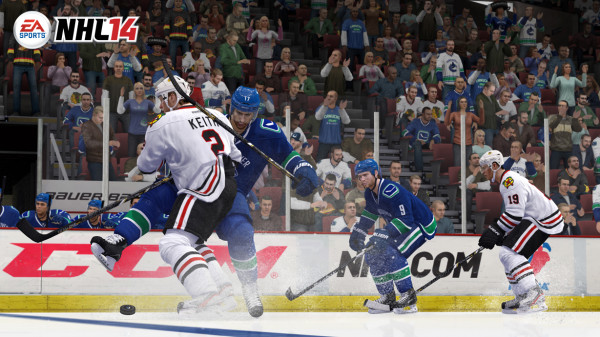 There are also media interviews that happen on occasion prior to or after the game. Depending on how you respond to the questions, there are four popularity meters that are affected based on how much you are liked by fans, teammates, management and your family. If fans don’t like you they may boo you on the ice, and teammates won’t take you on extra curricular events if you don’t get along. Management may limit your ice time, demote you or boot you out of the club if you’re not on good terms with them, and your morale and play will suffer if you aren’t getting along with family.

Similar to a role-playing game, you earn experience based on how you perform in the game and are given an XP target by the coach before each game. The experience you earn from scoring goals and picking up assists, among other things, can then be used to raise your stats.

I personally played and won the Memorial Cup with the Niagara Ice Dogs and then was drafted first overall by the Boston Bruins. After being sent down to the Providence Bruins, the game seized up in the offseason trying to sim through September 21st. The issue happened another dozen or so times at that point, so I never actually got to play any games in the AHL/NHL in the mode as of yet.

Other modes in the game include Be a GM mode where you run a NHL franchise, and season mode where you can take control of any team in any league (NHL, AHL, OHL, QMJHL, WHL) and play through a full season. Add that to a robust online footprint and there is a ton to do in this game.

EA Sports World Tournament, Mastercard Memorial Cup Tournament, Quest for the Cup, Be a Legend and Playoff Mode are just a few other modes in this jam packed title. If you’ve been waiting to pick up an NHL title from EA Sports this is the one that is a must have.