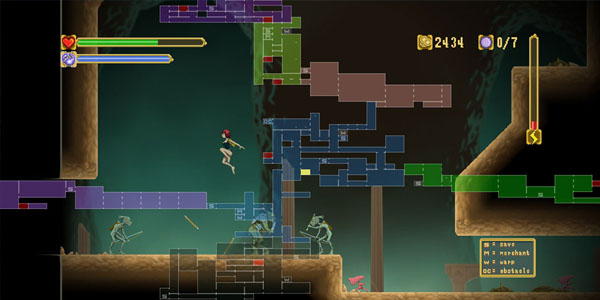 I’m usually always poking around at various indie games on the Xbox Live Marketplace. While I really should write up about a lot more of my favourites, there’s definitely one recent addition that Metroidvania fans should check out.

The demo takes place after the games intro which involves the three main characters, two siblings and a fellow classmate from a magic class. In the demo, you’re telewarped into a forest setting which quickly reminded me of the classic game Jill Of The Jungle, at least from what I remember of it. Even bringing in memories of exploring Shadow Complex, instead with a fantasy setting. No big story spoilers, but if this does sound fun you may just wanna go get the demo and try it out yourself. Otherwise, read on!

Meanwhile Magicians and Looters itself does a fantastic job of setting these three companions out on their journey, reuniting them, and making the story funny and enjoyable. The dialogue is cute and comical, right down to Captain Cuddles, a cat who teachers you new moves. This is a fun adventure, and with the admission price of only a dollar, I’ve got much more value out of the game.

One thing I really like, which seemed to be the first nice touch I noticed, was coins that drop in the game seem realistic. They’re actual coins that just fall on the ground. So after slaying some Morgs, the games goblin like monsters that roam the areas you’ll explore, coins sometimes spray and you’ll find yourself scrambling over the area they fell to pick them up. While this may sound annoying considering you may lose track of where they land, they do seem to glint a bit at least it seems, and as I noted it does feel natural.

Away from the little details, Magicians and Looters is loaded with treasure chests to bash open and find trinkets in to add boosts to the three characters. Each one of these three playable characters has unique skills that makes them different. That and one is a hand to hand fighter, another has a sword and shield, and the last uses two swords at once. The best part about them is after they reunite, you can swap between characters at save points.

Boss battles are fun and feel like something potentially from past Castlevania side scroller Metroidvanias. You’ve got a map to view all the areas you’ve been to or could revisit like similar games. This is just a solid title. Leveling works by finding orbs as you progress. This seems to require as many orbs as your next level. So five orbs to obtain level five. Leveling only seems to give you a set boost, such as a percentage increase to your hit damage, but it’s still a nice touch to keep you searching for secret entrances to obtain more orbs.

Even the music is really enjoyable in this title. It’s just a fun, quirky adventure that definitely deserves lots of attention.