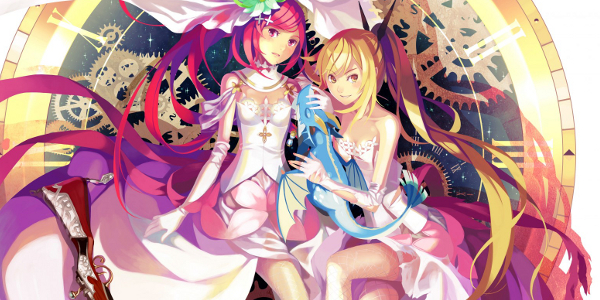 If you’re looking for a slower paced RPG with action based combat and romantic anime overtones with occasional lightly perverted jokes, this title is for you. Time and Eternity is a game you relax to since it does take a decent amount of time to play through. Combat especially can be quite lengthy and the battlefield areas can have quite a bit of ground to cover. This review contains early on spoilers.

Let’s rewind.The game begins the day before your wedding to Toki, princess of the Kamza kingdom. After getting to meet her friends, the game moves on to your wedding. Unfortunately, the ceremony is crashed by assassins who leave your character for dead. It turns out Toki not only has another girl named Towa who’s soul resides in the same body, but she can also travel through time. 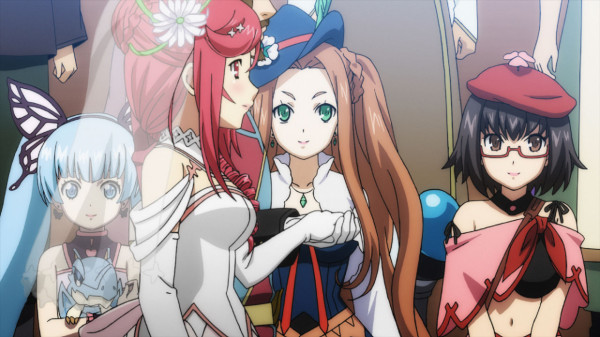 Not wanting to let her husband-to-be perish, she goes back six months to try and learn more about a fortune tellers warning, and the assassins guild which Toki assumes is to blame for the attack. In this process, your character, Toki’s fiancé, ends up taken back through time as well and into the body of Toki’s small pet dragon Drake.

Time and Eternity is very cute. It plays on emotion and has silly moments such as when Drake, now inhabited by Toki’s fiancé, wants to take a bath with her while still pretending to be her pet. As far as I’ve seen, those moments don’t play out into actual bath scenes, just Drake getting excited about the prospect and then let down. There are moments when characters explaining themselves would be helpful, such as your friend who obsesses over a guy who has a crush on Toki. You really just want Toki to take both their hands, put them together, and leave them to be happy so you don’t have to hear her friend drone on anymore about the guy. I mean that lightheartedly, but it’s probably left this way for the sake of build up.

The main dialogue sections are fun, even if the characters can get pretty cliché. Watching these scenes is entertaining, and though it is mostly reused animation throughout, it is nicer than just having plain dialogue boxes and the characters sitting in the scene. Many of NIS America’s releases have had various takes on giving characters life during lots of talking, from the breathing characters of Legasista that had some extra motion added so they weren’t just static characters, to now these sets of reused animations in Time and Eternity, which work well. Of course, these games are all by separate production companies, I’m just saying it’s neat to see different approaches. 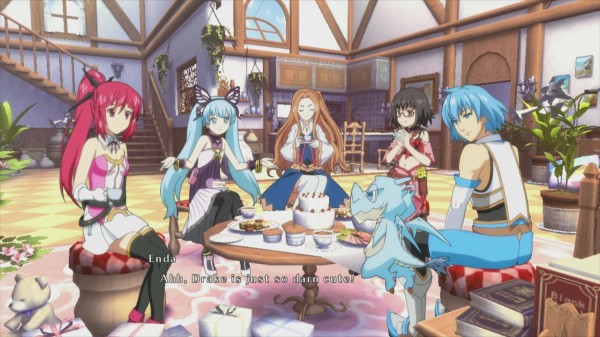 Combat consists of an interesting action format. You control Toki, or her alternate soul Towa, throughout the game. She has a ranged weapon, a rifle, and a knife for close up fighting. Players can also leap forward into close range, or back again for ranged combat, as can enemies. Dodging and blocking are also big parts of combat. The only issue I had with some of this was it wasn’t always clear the exact moment you had to dodge. So sometimes I’d leap too soon, Toki or Towa would return to their normal position, and take damage from the attack I was trying to avoid. Some moves do have a charge circle that pops up with a countdown timer in it. These allow you to get out the way easier. Response is fairly good, however sometimes it seems I got locked into a combo which I wished dodging would cancel out of. Blocking would also have been good to cancel out of a combo. 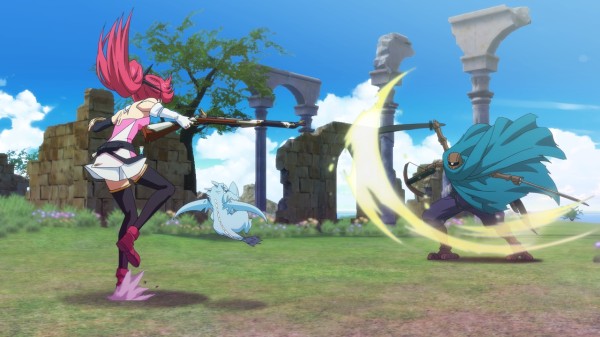 To be fair, it’s probably just me button mashing too much and I probably could have slowed down my combat just slightly, but it is basically real time. One of the worst situations I encountered was after obtaining elemental weapons. They are just elemental versions of your knife and rifle, however you can’t change them once you’re in combat. So if you get stuck fighting a foe with the same element as your weapons, you’re dealing very minimal damage and trudging through a long battle. I actually gave up on elemental weapons after this just to avoid another incident like that. I assume you could mix and match weapons to give yourself an advantage with multiple foes showing up, but that is also an issue, since foes are mixed up in the battlefield, so you’re may never fight only one element in an area.

The reason I say you’ll need patience for this game is mostly because of the combat. You fight one enemy at a time and some of those battles can be lengthy, especially when you get upwards of three foes per battle. At worst, it was taking a full minute to take down each enemy. That may not sound bad, but when you get upwards of five battles while exploring one area, you’re talking about fifteen minutes in battle alone. The encounter rate isn’t all that often, but it can be just enough of a pain that when you think you’re at your destination you’ll run into one more battle. 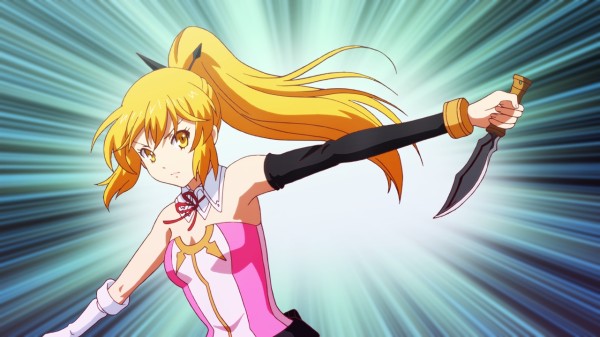 Interestingly, when you level up you switch between Toki and Towa. Not only does this change up how you fight, since I found Toki was better with her rifle and Towa more skilled with her knife, but it also gains you different affinity towards each of the girls. There is a meter in your stats menu that shows which one of the girls you are more in tune with, so it really does seem to matter who you end up going home with after a mission ,since occasionally they’re chances to  have loving conversations between Drake and his bride-to-be. What it matters, I’m not too sure. You are sometimes given conversation choices to be sweet or perverted. They tend to be just for fun as Toki at least doesn’t normally understand your meaning, and the conversation eventually drops into the dialogue I’d assume you’d get if you were being romantic instead.

There is lots to do with many sub-quests to wander around for, but the battlefield maps strangely have everything marked out for you. To be fair, finding hamsters for the one character in the game would be almost impossible if you were scouring the world for them on your own without a pointer. However, it literally is a dot that points you directly to its location. Same goes treasure chests. So when you go into a new area, you’ll actually be able to map out your path to collect items on the way. I did select easy combat when I started my game, so I don’t know if this option is potentially affected by that choice. 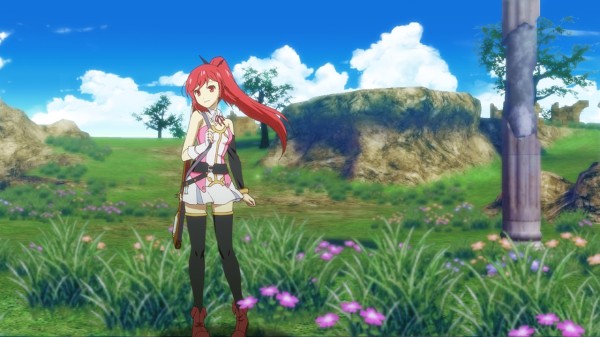 The game consists of an overworld map with various dots to visit, and new areas are added as you progress. The kingdom of Kamza also has its own map with various places to visit including an item shop. You can also pick up some sub-quests in different areas along the way too, which the game does a good job of displaying on the overworld maps.

Time and Eternity‘s animation definitely stands out since characters are actually 2D, not cell shaded 3D models. Unfortunately, it seems many of the monsters are just pallete swapped versions of foes you’ve already encountered, or they have an adjusted size as well. Again I was in easy combat mode, but this did make combat repetitive since no matter which golems I encountered, they still had the same basic moves. If the game had more variety of monsters, such as Dragon Quest, it would have made everything a lot more fun. Combat happens a lot, and it does have an interesting feel, and with some improvements it could be a game within itself. The context is certainly different, but I found myself thinking of similarities to Punch-Out while in battle.

If you’re looking for a game to relax with this summer and battle through, while enjoying the main story with voice acted cutscenes (much of the rest of the game is just dialogue to read, at least in the English voice over mode, which is what I played) and see how the tale of Toki’s wedding plays out, this is a worthwhile title. The game isn’t bad at all if it’s what you’re looking for, and the dialogue is just the sort of interaction you love to pieces. Otherwise, gamers may find the characters frustrating and the combat to be draining. It really is a matter of personal preference. 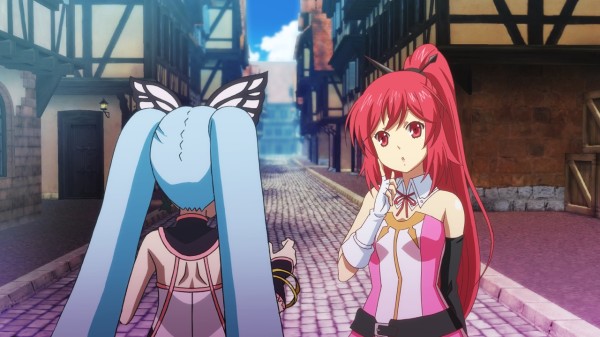 NIS America’s Time and Eternity is fun. It may be a plodding adventure, but the story tends to keep you interested. Combat is different, and as repetitive as it may become, it’s still neat. Potentially since Toki and Towa have unique personalities, replaying the game may even be something hardcore fans may want to explore, allowing you to experience all the different conversations. That I’m unsure of, but I’d imagine it’s possible since the game doesn’t limit how much you can grind. So if you really want to experience a cutscene with Toki instead of Towa, you can just level until you swap back or visa versa.

I have to admit, this game captured my attention. I’ve played other games that just lost my interest, but there is something about Time and Eternity that has kept me playing. If combat was a bit faster paced that would have been appreciated. However, if this kind of romance based anime is your cup of tea and you’ve been wanting a new RPG that feels somewhat classical, you may want to give Imageepoch’s latest title a go.