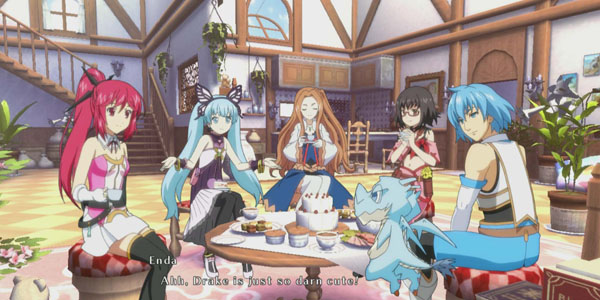 The fine folks at NIS America are letting us take a look at their upcoming Imageepoch release Time And Eternity to review it. However the best news is we don’t even have to wait to tell you about this title that is still quite a ways from it’s release date of July 16th! So how have the first couple hours of the game been? I’m glad you asked.

Of course there are some very mild spoilers ahead for the first few moments of the game, but that will help me explain what is going on. So T&E begins the day before your wedding day to marry Princess Toki. You can name your character whatever you like, but you’re a knight of her kingdom of Kamza. You’re at home and get introduced to three of Toki’s friends as well as spending time with her pet dragon in the living room of your soon to be home together.

This is a wonderful example of how the game plays like an anime episode. Not only do you get the rare interaction choice of saying one thing or another, but you have the option to talk to each individual character when in these house scenes via icons at the top right of the screen. There is just enough animation to the characters to give them life beyond your usual 2D RPG character interaction. Instead of just still images going from pose to pose, T&E features animation cycles that does add to the feel of the style.

So far, much of the dialogue feels interesting. Sure there are jokes along the way such as our hero being eager to kiss the princess for the first time and some other sorts of pervy moments, but they’re pretty light hearted. The characters are fun and as wacky as they can seem at times, it’s usually fun to watch them talk to each other.

The following day on yours and Toki’s wedding day… Your character is unfortunately assassinated. Toki ends up using her powers to go back in time six months to when she first heard from a fortune teller that a death would occur at her wedding. Oddly you get caught up in her going back in time and end up taking over the form of her pet dragon! So your character is included as the game progresses with you inhabiting the tiny blue dragon Toki has.

After leaving the first area and continuing the story a bit, you’re free to wander the kingdom of Kamza via a map with various points of interest marked off on it. These tend to lead to other maps where you can select sub quests. The two I tried were quite varried. One was a dialogue based fetch mission to buy something from the store, while the other I was tasked with going into a game area to clear out some enemies.

Interestingly, as noted in the trailers for this game, Toki has two souls in her body. A blond girl named Towa who is much more agressive also resides within her. When you level up, you switch characters. So level one, you’re Toki, when you reach level two, you become Towa, then switch back and forth as you gain levels. Apparently there are items that can cause this change too but I havn’t found any of them yet.

Toki and Towa both have different skills and seem to be better and different modes of attack. Both have a rifle for distant combat and a dagger for up close combat. Toki is great with firing off her rifle in quick succession, while Towa is better for close up battle. This of course comes into play when considering how to tackle enemies after a switch occurs.

Combat can sometimes in the early stages feel daunting with how long battles can last. They’re not extremely long, but they do feel like boss battles at times when you’re just starting out. Leveling up does make a considerable difference each time however, so a little exp grinding can definitely help if you feel worn out in battle. I’m playing using the easy mode of combat.

Don’t get me wrong, combat is interestingly unique. Your first couple ‘boss’ battles may feel a bit stressful but the regular enemies aren’t too fast. In T&E you can both dodge and guard in it’s real time battle system. So if an enemy is launching a projectile or about to slash away at you, dodge for a miss and then dive in and continue striking them. At the start you’ll be mashing the circle button, but as your understanding of the system grows you’ll vary things up a bit. I’m hoping that there is a good variety of enemies but I’ve only seen about maybe four types so far. Think of it as a loose take on Punch Out. You’re still taking damage when guarding however, and you have ranged attacks, but it has that jab, jab, dodge feel. Hopefully the game will continue to make combat a thinking game as it goes on.

I’m still early in, but Time and Eternity has a lot of promise. It skips most exploration in the kingdom for a map setup, but has some pretty big battlegrounds to wander about. If anything this streamlines the game so you can stay more in dialogue and combat which are the games to main focuses anyway. If it’s the story of NISA adventures you prefer, this title expands on that feel by giving you a more anime feel to the regular dialogue. I’d definitely recommend it then. It’s very much a game NISA fans will feel at home with, but it does bring something fresh to the concepts as well.