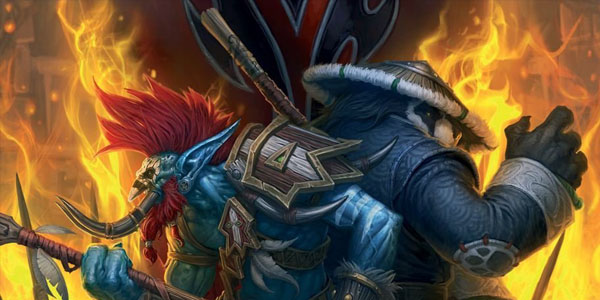 Fresh from our review of Christie Golden’s fantastic Jaina Proudmoore story, we’re happy to announce that the next physical Warcraft novel is on the way. This time, author Michael A. Stackpole is tackling a story focused on Vol’jin, leader of the Darkspear trolls. Considering the inclusion of Vol’jin and other disgruntled Horde members in the Tides of War book, this does seem like a natural progression for readers.

If you’re getting psyched about the storyline, I think you’ll love the next novel which focuses on Vol’jin. Have you played the troll 1-10 intro experience? Vol’jin flat-out tells Garrosh he doesn’t trust him and he’ll stab him in the back the moment he sees an opportunity. The novel carries his story forward and really meshes in with the events of patch 5.1.

One of our ongoing goals is to make sure that the games and novels complement each other, and that major lore events don’t happen in the novels without some kind of representation in-game. This is a huge challenge for us!! But I think we’re getting better at it.

Possibly spoilers in the official release reveal the story seems to even potentially carry on to Pandaria this time. Not that the cover image doesn’t seem to imply Vol’jin meeting the Pandarens. Read on for full details:

Vol’jin, courageous leader of the Darkspear tribe. His strength and cunning are unmatched even among the Horde’s most exalted champions. Now, on the legendary continent of Pandaria, the troll chieftain faces his greatest trial yet, one that may redefine his purpose in the…WORLD OF WARCRAFT

Warchief Garrosh’s assassins strike at Vol’jin, leaving him at death’s door. But fate smiles on the wounded Darkspear leader when renowned brewmaster Chen Stormstout transports him to the safety of an isolated mountain monastery. There, Vol’jin wrestles with old hatreds smoldering between the Alliance and the Horde as he struggles to recover alongside a mysterious human soldier.

Yet this is only the beginning of Vol’jin’s worries. Soon, he becomes embroiled in an invasion of Pandaria launched by the Zandalari, revered trolls driven by dreams of conquest and power. This ancient tribe offers Vol’jin a chance to seize the glory that is the birthright of all trolls…an offer made even more tempting after Garrosh’s brazen treachery.

Amid these troubling events, Vol’jin is rocked by intense visions depicting his race’s grand history. As he questions where his loyalties lie, he knows he must make a choice about his own destiny that could save his people or damn them to languish under Garrosh’s heel in…SHADOWS OF THE HORDE

I’m definitely looking forward to the books release this summer! World of Warcraft: Vol’jin: Shadows of the Horde is set to arrive on bookstore shelves July 2nd.