It should be no surprise that Christie Golden’s latest World of Warcraft book is a masterpiece. Perfect not only as fantasy fiction, but more so as a piece of literature itself. I’ll get more into that later. Jaina Proudmoore: Tides of War is a defining moment in the lore Warcraft fans have come to know and love. After the Cataclysm had drawn so many together in a noble cause to save their world, that time has no passed and the world again is changing.

Instead of having the factions of Azeroth venture to Pandaria in Blizzard’s latest expansion, they are doing so in the throes of a return to war. The seemingly complacent time during the Cataclysm, when all eyes were turned to a common enemy has lead through into a return to the struggle Warcraft fans have dealt with all these many years.

This book tells the story before everyone adventures off to Pandaria. Even if you’re not a fan of Blizzards new Pandaren race, you don’t need to worry about that here since they aren’t even mentioned. The tale within is focused on Jaina Proudmoore mainly. It is about how even in these coming times, she will need to find her place in an Azeroth that is returning to war. Lady Proudmoore is a powerful mage who wants peace. She rules over Theramore on the shores of Kalimdor, one of potentially only two east coast footholds of the Alliance on those lands. These Alliance locations have become a thorn to current Horde leader Garrosh Hellscream. He wishes for a completely Horde controlled Kalimdor, and this is how the novel begins to unfold. Along with all this, Kalecgos of the blue dragonflight is searching the world for one of their missing artifacts, the Focusing Iris. A powerful item that can amplify arcane energies. But who has taken it from such mighty protectors as the blue dragons?

As one of my first World of Warcraft novels, I was delighted by many things in this book. Firstly, the attention does shift between Alliance and Horde stories. It isn’t meant to be biased at all, and anything that could be more encouraging to dignify one side of the war is usually sedated by uneasy opinion of even that factions members. There are neutral emotions here, and those who appreciate their faction, but not it’s leader. I think this is one of the things Blizzard even has done expertly throughout their World of Warcraft adventure, if not the entire series. You are playing a role in this world when in these games, and your emotions can be swayed by the expert storytelling. Christie Golden has done a fantastic job keeping this tale true to that progression.

Secondly, this book has an amazing feel for a fantasy fiction story. I haven’t confirmed that every character involved is in the game, but I’m pretty sure that even some of the more minor roles are nods to actual in game characters. This is interesting since World of Warcraft is a ‘place’ of sorts that you can visit. I remember before all of these events unfolded and I was given the chance to review this book, I’d taken a trip to Theramore to visit Lady Proudmoore herself. When I’d arrived and visited the top of the tower, there she stood! It really brings this world to life when you realize the people you are reading about are potentially all characters who live in Azeroth.

I found myself drawing on Warcraft lore many times in the book, but I don’t think fans of fantasy literature will become too lost in reading this story. That and as mentioned above, even if the occasional race may be confusing to you, this is a wonderful piece of literature on it’s own accord. I very much recommend this book, which is now even out in paperback as well as hardcover. World of Warcraft – Jaina Proudmoore: Tides of War is a fantastic read.

If you’d like to hear more about the story itself, please do read on. I can’t promise you won’t consider some of what follows to be spoilers however, so you may want to skip the rest of this review. 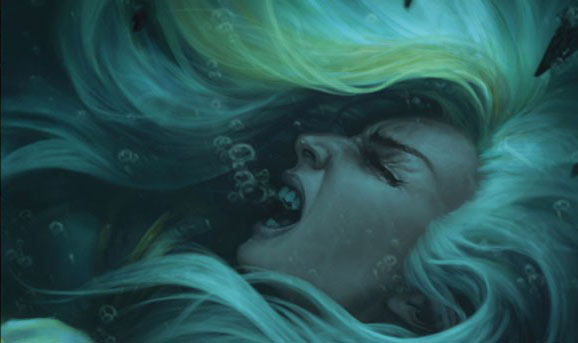 Jaina Proudmoore: Tides of War is about change, the acceptance of loss, and grief in general. In this sense, it is more a work of classic fiction than a heavy delving into fantasy lore. The tone of the book works beautifully to convey these feelings to the reader. The story begins quite slowly, giving you time to settle in with the characters, especially Jaina. Of course, these are times of war, but you don’t feel that. So you don’t push away liking this character or that for fear of losing them later in the story.

Dispite the uneasy tension and promise of coming war, you don’t feel that the people of Theramore aren’t safe. It’s a peaceful time and the meaningful conversations about the future, even though they are touched with foreshadowing and looming threat, don’t really feel imposing. Jaina is a power mage, with equally strong friends. How could anything go wrong in such a world?

That’s where the book truly stands out as a wonderfully crafted tale. Many World of Warcraft players know (again, spoilers here folks, stop now if you don’t know much about Theramore) that Jaina’s Theramore does fall. We’ve played the scenario in which, in the Alliance portion, you venture back into the destroyed stronghold. This book even goes beyond those events, into a story that you probably didn’t consider as you completed your task in game and moved on after seeing a commanding Jaina at the end of the scenario’s story. This was Jaina’s home that she ruled over, and it’s gone now.

The story expertly delves into Jaina’s torment, taking the sweeping and endearing introduction to the novel, and expanding it into a much faster paced struggle. Jaina, who once wished for peace, is now torn and grieving her loss. This is an emotional story that deals with losing all one person knows, and how they come out of it a changed, and hopefully better person. It reflects that everything changes in the state of loss. Through all this, Tides of War is wonderful literature and I’m glad to have once again experienced a fantastic tale by Christie Golden.

Tides of War is considered to be a book between Cataclysm and Mists of Pandaria. I consider it more so to be an epilogue to Cataclysm. You see the changes coming, but the Alliance airships aren’t present yet. Varian isn’t preparing to venture to Pandaria, as the clash between Horde and Alliance spills over onto those shores. This book is specifically about content between those times. It shows the progression of Horde and Alliance lore. Though the main intention of this book to the World of Warcraft seems to tell the tale of Jaina Proudmoore and how even in these coming times, the one who desires peace possibly the most in Azeroth will even be swallowed up in the tides of war to come out a changed person.