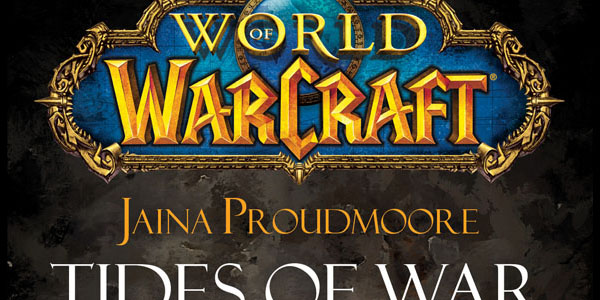 The latest World of Warcraft novel by Christie Golden is an absolute treat, and now you can purchase it in travel size! Jaina Proudmoore: Tides of War is now available as a paperback novel. Our upcoming review will go into detail on just how awesome this book is, but I can safely say it’s definitely worth a read. I’m sure fantasy fans in general can enjoy it as a stand alone, but Warcraft fans especially will want to experience these latest moments in the war between the Alliance and the Horde for themselves.

Considered a tie in to the Mists of Pandaria expansion, I like to think of Tides of War as an epilogue to the Cataclysm expansion. What starts as a quest for the blue dragonflight to find their missing and most powerful artifact, the Focusing Iris, becomes an even bigger crisis when Garrosh Hellscream marching on Theramore threatens to push Azeroth back into war.

From Warcraft to Starcraft, Star Trek to Star Wars, Christie Golden is a New York Times bestselling and award-winning author who has written much in the sci-fi and fantasy genre. One of my personal classic favourites is Vampire of the Mists a Ravenloft novel.

The paperback edition of Jaina Proudmoore: Tides of War sells for $7.99 US, $9.99 CND. Hardcover and audio book editions are also available. Following is the official press release on the story:

The ashes of the Cataclysm have settled across Azeroth’s disparate kingdoms. As the broken world recovers from the disaster, the renowned sorceress Lady Jaina Proudmoore continues her long struggle to mend relations between the Horde and the Alliance. Yet of late, escalating tensions have pushed the two factions closer to open war, threatening to destroy what little stability remains in the . . .

Dark news arrives in Jaina’s beloved city, Theramore. One of the blue dragonflight’s most powerful artifacts—the Focusing Iris—has been stolen. To unravel the item’s mysterious whereabouts, Jaina works with the former blue Dragon Aspect Kalecgos. The two brilliant heroes forge an unlikely bond during their investigation, but another disastrous turn of events looms on the horizon. . . .

Garrosh Hellscream is mustering the Horde’s armies for an all-out invasion of Theramore. Despite mounting dissent within his faction, the brazen warchief aims to usher in a new era of Horde domination. His thirst for conquest leads him to take brutal measures against anyone who dares question his leadership. Alliance forces converge on Theramore to repel the Horde onslaught, but the brave defenders are unprepared for the true scope of Garrosh’s cunning and deceptive strategy. His attack will irrevocably transform Jaina, engulfing the ardent peacekeeper in the chaotic and all-consuming . . .