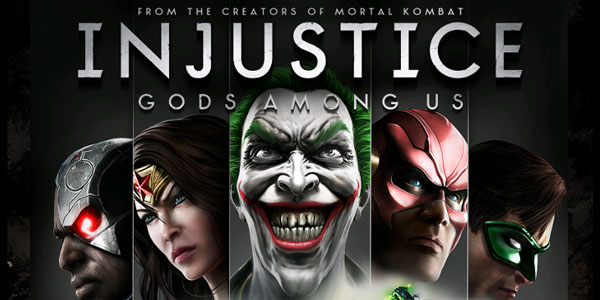 It seems we here at Broken Joysticks love Injustice. Unfortunately we can only share one review per site, so think of this as a compliment to kashhoward’s wonderful review. Below is my review from Darkain Arts Gamers that I am sharing as an extended hands on impression to my time with the game so far. I played the Xbox 360 version and also gave the game a 9 out of 10.

Injustice: Gods Among Us is a departure from Mortal Kombat’s usual fighting style, but has familiar elements that will keep Nether Realm fans from feeling alienated. Considered a way for the team to take some risks and experiment with new concepts, Injustice is an excellent example of what an established company can do with a property they seem passionate about.

If you were a fan of the recent Mortal Kombat reboot which basically retells the story of the first three games in a story mode as well as regular kombat, you’ll be at home here. Story mode is back again, featuring a length plot that has an interesting focus on pitting characters against their alternate world counterparts. In total, it took me about four and a half hours to finish story mode. While that section is such a rush and might leave you feeling like you’ve completed the game, story mode is really just icing on a wonderful cake.

Aside from the cinematic story mode, Injustice contains your usual fighting game progression as well. So you can pick your favourite superhero and battle your way to their short story conclusion for each. Considering there are twenty four characters to play as without DLC, that’s quite a lot of replay value. As an added incentive, you’ll gain XP after each battle that gives you various unlocks each time you level up. Leveling up is account based, not character based. The most basic of which are armory keys and access cards that allow you to pick your unlocks this time. 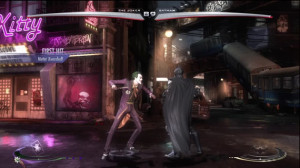 Instead of Mortal Kombat’s random unlocks, you actually know what section you’re opening up an unlock from this time. In the extras section you can view characters, backgrounds (as well as experience their destruction animations that occur during your battles), and additional skins of the alternate world versions of the games main cast.

Combat differs from Nether Realm’s usual feel in several ways. The main feature of which is the interactive environments. These do take a moment to get used to since sometimes you’ll be grabbing an object, and others you’ll interact with a trap such as with a button or pull chain. After you figure out what your specific character is trying to do, you’ve got a good advantage to use in combat. It isn’t as complex as it sounds, just sometimes you’ll be batting your opponent towards an object in the background, and others you’ll be using an object yourself instead. Also heavy characters tend to destroy and throw objects. Light characters bounce off them to move around quicker, or destroy objects that could be used against them by heavy foes.

Another option is the clash system which sends fighters hurling themselves at each other while wagering part of their super power meter to best the other. This gives bonuses such as health boosts to the character who wagers the most power. It is possible to come to a draw as well, just sending both fighters stumbling back from each other. 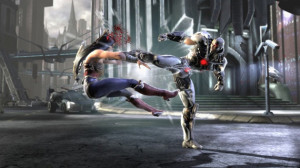 I found fighting feels a bit faster than Mortal Kombat. Once you get the hang of it, you’ll be throwing out three hit combos, pulling off a few special moves, and then using heavy hits to knock your enemies into a level transition which is another way Injustice changes things up a bit. Usually at the edge of a stage, you can knock your foe with a specific powerful move which will throw them into a cinematic transition to another nearby battle area. They do take a good chunk of damage from this too, so it is a tactical advantage.

The characters do feel unique. Though you may have the odd time you may think something like, Doomsdays leap move feels sort of like Sheeva’s, even that attack isn’t exactly the same. You’ll be able to draw some similarities to various moves, but in general you’ll feel like you are playing an original character, not a Mortal Kombat knockoff. In an interview with Senior Producer Adam Urbano I’d asked what their take on Aquaman would be like, and I have to admit like he said the King of Atlantis is quite impressive! Using quick jabs with his trident, he’s a force to be reckoned with. Jokingly I’d asked if Aquaman would attack with sharks, and while they are included with his super move, it’s done in a way that feels right for the character and not silly or out of place.

Super moves are Injustice’s answer to Mortal Kombat’s X-ray moves. You still use a button group or pull both triggers to activate your move when your characters power bar is full, and it does depend on if your attack connects if you’ll get said super move to work. These are fun cinematic moments that are unique to each character. I was surprised that (story spoilers) Yellow Lantern’s background to his super move differed from Green Lantern. 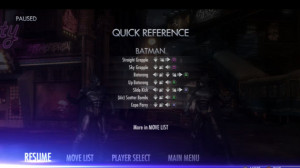 The only improvements I would have liked to see would have been more regular universe backgrounds. The main story takes place in the alternate universe which is quite a dark dystopian future, however in cut scenes you are shown things like Superman’s statue in the regular universe Metropolis. I’d love to have battles in front of that. Or even on Oa for that matter. It’s certainly not a deal breaker in the least, but when you’re out of the main story line it would be nice to stretch your imagination and have some combat match ups in new locations. I probably wouldn’t have thought about such things, but since they are in the cinematics it makes it a brief tease that draws you into wondering what if.

Challenges do keep you busy though if you want something to mix up the regular battles. In their own S.T.A.R. Labs section, you can play through short stories that involve both combat and sometimes skill testing mini games. This mode is fun and definitely a worthwhile addition that really balances out the content of Injustice. The challenges will take you awhile, story mode is quite a few hours, and playing each character through regular mode will run you about ten to fifteen minutes each (even if the game notes your play time as only seven minutes at the end of each play through, I think it only counts actual combat time), you’re looking at a lot of gameplay.

On top of all that, the battle mode also includes variations as well. From poisoned, in which your characters health slowly drains during combat, to survival in which you’ll carry over your health bar to the next fight, there’s lots to do. Nevermind the many extra variations you can unlock with access cards earned via leveling up your account. 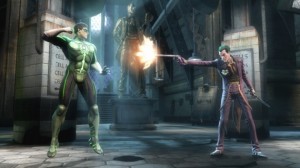 Lastly, but definitely not least, the voice acting is top notch here as well. The characters feel right, and many have talented actors and actresses reprising their usual DC roles. Injustice has such an enjoyable story mode that you could watch the cinematics alone and be content with it’s quality. I’ve read complaints about the story, but I personally found it to be very enjoyable. It takes place in an alternate DC universe, and as such you’re never sure what might happen to that worlds cast.

Injustice is a solid improvement on the already great fighting games Nether Realm’s has been creating. It does enough differently and offers a unique cast to make the game worth recommending. Not to mention the fun you’ll have sitting down with your friends and coming up with battle after battle to enjoy fighting out. Some things may be familiar, but this isn’t a Mortal Kombat clone, this is Injustice: Gods Among Us, a great new game from a team you trust.