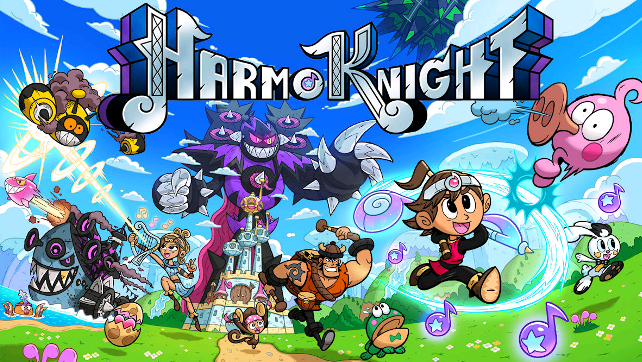 Not too much was released today in the weekly download, though all four items are for the 3DS. This week sees the release of Game Freak’s harmony music game HarmoKnight as well as Natsume’s 3DS Virtual Console offering Legend of the River King. The game is a fishing role playing game that was originally released for the Game Boy. Definitely sounds like an interesting title. Two previously retail released 3DS titles are also now available for purchase on the eShop. Racing game Sonic & All-Stars Racing Transformed from SEGA is now available and Capcom’s Resident Evil Revelations, which is being remade for the Nintendo Wii U very soon, can now be purchased via the eShop. Check them all out!

GAME FREAK inc. brings all of the polish players have come to expect from their Pokémon franchise to a brand-new action-packed rhythm game! Use Tempo’s Music Note Staff to beat drums, crash cymbals, and smack enemies through more than 50 levels with unique boss fights. On your journey, you’ll team up with multiple characters like Lyra, who can slide under obstacles and shoot musical arrows, and Tyko, who can pound out powerful beats with his drums! More challenging speeds and unlockable stages await those locked onto the beat. Feel the music and find your rhythm to save Melodia!

Legend of the River King

Embark on a dangerous quest for a mystical fish, or care for your own pet fish! Original Release Date: November 1999. The Legend of the River King is a unique fishing RPG that offers two great modes, putting your angling and survival skills to the test! Select Fish mode, and follow a young boy’s quest for the elusive Guardian Fish. Only with its magical powers can he save his sister from a mysterious illness. Choose a fishing spot from the quiet lakes to the raging rapids. Check the water conditions, and then select from a variety of fishing rods and tackle. But watch out, because dangerous animals will attack you along the shores! Stop at the local villages to sell your catch and restock on supplies, or rest at an inn before moving on. Catch all 40 different species of fish to reveal a new fishing spot! You can also try your hand at raising a pet fish in Raise mode. Keep your fish happy by regularly checking its status and cleaning its tank, and watch as it evolves into a different species!

Sonic and the All-Stars cast line up on the starting grid once again to battle for supremacy in the ultimate race. Compete across land, water and air in incredible transforming vehicles that change from cars to boats to planes mid-race. Master your driving skills as you drift, barrel roll and boost to overtake your rivals, or use your weapons tactically and unleash your All-Star move to gain the winning advantage. Original Release Date: Feb 12, 2013.

Built from the ground up to take advantage of the Nintendo 3DS features, Resident Evil Revelations delivers an exceptional survival horror experience with outstanding visuals that bring the fear to life. Resident Evil Revelations introduces a brand new storyline, locations and characters to the series, including playable characters and BSAA members Jill Valentine, Chris Redfield and Keith Lumley with their partners Parker Luciani, Jessica Sherawat and Quint Cetcham. Jill Valentine and BSAA partner Parker Luciani have been sent to search for Chris Redfield, whose last known GPS data positions him as being onboard a supposedly abandoned cruise ship. Danger hides around every corner as they explore the confined space of the ship and face a menacing new enemy and virus; the T-Abyss. In a brand new mode for the series, Raid Mode will offer players a different kind of experience separate to the main campaign story in either solo or co-op play. Compete in a variety of missions to defeat enemies and level up your character and gain more powerful weapons. Earn points for the enemies you attack and select from a range of upgrades to improve your weapon’s performance. Original Release Date: Feb 7, 2012.