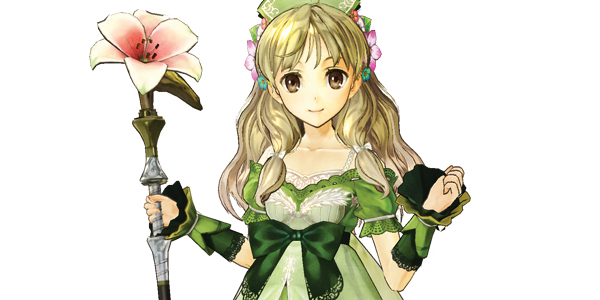 Tecmo Koei is probably best known for its innovative and creative item crafting based series Atelier, developed by Gust, which is one of the more respected series in the JRPG genre. Whereas other JRPGs have usually focused on straight-forward “save the world” stories, and many other games skewing darker and darker in the modern gaming world, it is nice to know that a developer can still put out something nice and fluffy, while nonetheless, still be engaging and entertaining.

The series has come a long since its heyday without fundamentally changing the item crafting ideas that have been its foundation. The lighthearted, cutesy atmosphere has been maintained as well. This is not to say that the newest iteration of the series, Atelier Ayesha: The Alchemist of Dusk,  is a totally meaningless entry with nothing new to offer; indeed, it is a surprisingly deep game with a lot to offer with its ideas and gameplay.

The story of Atelier Ayesha is little different than the stories of traditional JRPGs. You do not play a young man out to save the world or find love; rather you play as a young woman on a quest to rescue her sister. Along the way you meet many colourful characters, including a young witch apprentice, a taciturn middle-aged alchemist, and an aggressively ecchi red-haired shopkeeper (because this is a JRPG and of course you do). 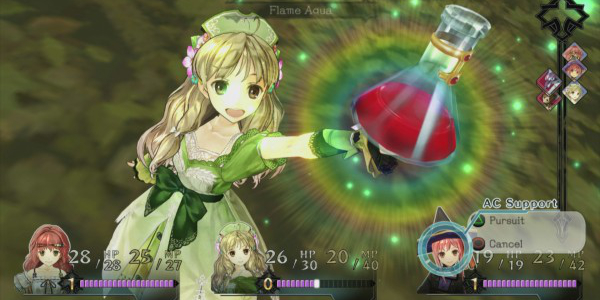 The story follows the titular Ayesha on her journey to explore the world, find her sister, and learn to become an alchemist. The story itself is rather engaging, even if the voice acting for some of the characters can get to be rather grating at times. The voice acting for the almost entirely female cast can get annoying because it’s so high-pitched, but that’s a minor nit-pick in what is overall a strong story that is worth seeing through to its conclusion, if only to unravel how all of it fits together.

Graphically the game is stunning, almost matching the graphical quality of the much lauded Ni no Kuni. The backdrops are rich and detailed, and the cutscenes flow well. The one problem is the lip-syncing often does not match up with what the characters are saying on-screen.

The game is not as expansive as some, with the world map being flat and rendered like a 2D map, but the environments look lush and detailed. 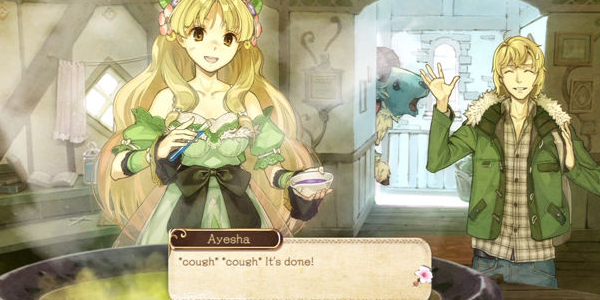 Musically the game is superb, with great tracks for the environments and overall, good music throughout the story. The standouts are the actual signing sequences; these pieces are interesting and well played, and make the  soundtrack seem like something that is definitely worth looking for.

The gameplay is rather detailed. The main element is of course crafting items which you obtain by exploring dungeons and defeating monsters. You bring these ingredients back to your alchemy workshop and mix them together to create items. The item crafting system is surprisingly deep, and it is definitely the standout of the game, as it is easy to simply lose hours just sitting around crafting items.

The combat isn’t that special, running off a standard turn-based battle system where the characters and monsters attack each other in sequence. The sole tweak being the ability to add extra actions by building up an action gauge through either attacking or being attacked. The one devious thing about the game is the time limit: you are given a time limit of three years to complete the task of saving your sister before she is lost forever. 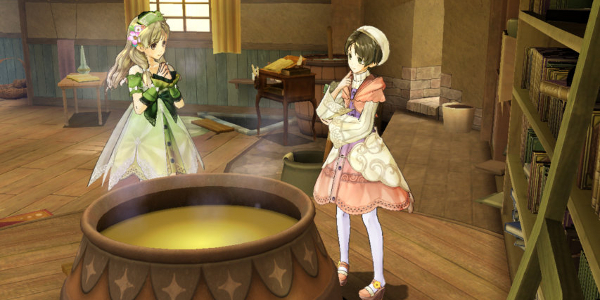 Traveling in the game, as well as gathering materials and crafting items, eats up time and it can be very easy to lose track of how many days you’ve actually spent in front of your cauldron mixing ingredients. The game runs off a standard leveling system for characters which unlocks more powerful abilities at higher levels, and there is a similar system for alchemy, which unlocks more powerful items the higher you go in level.

All in all the game does not re-invent the wheel, but then it was never trying to do so.  Atelier Ayesha represents a solid effort from Tecmo Koei to bring some bubbliness and lightheartedness to a very grey month. With an interesting, if sometimes annoying, cast of characters, a well thought out story, and a surprising deep and detailed item crafting system which is actually central to the plot and gameplay (rather than just a throwaway mechanic for fun and for the grind obsessed), Gust has successfully made an entertaining and interesting game that is well worth the time and effort for JRPG fans out there.