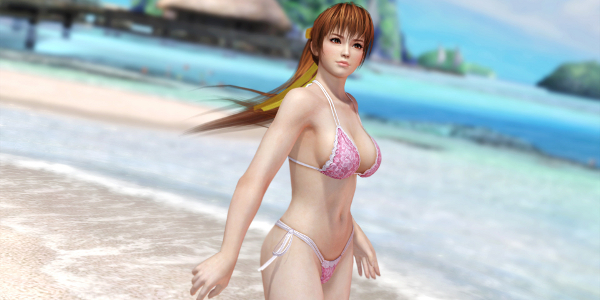 The PlayStation Vita is starting to become a portable utopia for fighting fans. Ultimate Marvel vs Capcom 3, Street Fighter X Tekken, Mortal Kombat, BlazBlue: Continuum Shift Extend, and PlayStation All-Stars Battle Royale already grace the system, and if you include the games available from the PSP’s library, such a Tekken 6 and Street Fighter Alpha 3 Max, you have a line-up of titles that should appease the most ardent of fighting fans.

Dead or Alive 5 Plus (hereafter DOA5+), Team Ninja’s portable installment of Dead or Alive 5, has a lot of competition, and with the aforementioned ports all ranging from good to excellent, a lot to live up to as well. Overall, the port delivers, bringing almost the entire console experience to the PlayStation Vita.

Let’s start with what’s missing: Tag team play is noticeably absent, which is a curious omission since the chapters in Story Mode that feature tag play are still present. Tag team play has never been the essence of Dead or Alive, but it has never been a throwaway feature, either. It’s a bit disappointing to see it missing from the portable version.

The other notable feature you won’t find in DOA5+ is an online lobby. Simple Match (unranked bouts) and Rank Match are both available, along with the Online Dojo, allowing online sparring with a friend, but the lack of a lobby is to its detriment. 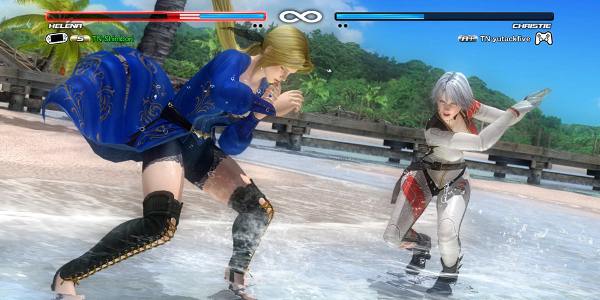 DOA5+ allows Cross-Play with the PlayStation 3 version of Dead or Alive 5. It performs admirably, with PlayStation 3 players having a DualShock next to their handle, noting their platform of choice, and Vita players having a Vita (of course). In my experience, the community has been the most active in lobbies on the PlayStation 3, leaving a large portion of potential combatants inaccessible to Vita users. It’s a shame, because in the matches I played, the netcode was excellent. Finding a match, however, was not so excellent, with wait times averaging around five minutes. You also can’t train while you wait, making the lull between fights unnecessarily tedious.

To compensate for the missing features, DOA5+ adds to the offline content. The most prominent, and perhaps the most superfluous (definitely the most indulgent), is Touch Fight. Movement is automatic, and you’re tasked only with touching your opponent until their health has been depleted, or until boredom settles in, which may be quickly. Tapping the screen executes strikes, while repeated tapping yields combos. Flick up to launch an opponent; flick down for downward strikes; and so on. Pinching the screen performs a throw. Holding the VIta in a vertical position will adjust the viewpoint from landscape to portrait. It’s mildly entertaining, and it does not strive to be anything more than that.

In addition to Touch Fight, DOA5+ includes a multitude of training options. Free Training returns from Dead or Alive 5, but DOA5+ features Command Training, Combo Challenges, and an extensive combat tutorial, taking you through the basics of play to more advance techniques. It’s surprisingly comprehensive, and depending on your skill level, it may be a real eye-opener to the intricacies of the fighting system. 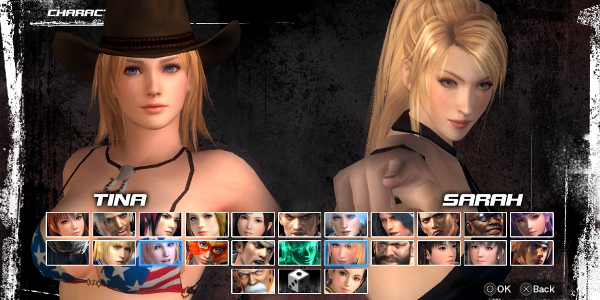 The music in Dead or Alive 5 was middling, focusing on ambiance without much success. DOA5+ addresses this with background music customization: the tunes can be set between the stage themes from the console version, or you can customize the music to your liking with the newly included character themes. It was an unexpected feature, and a welcome one.

You’ll also find that Breast Motion is a setting you can adjust in DOA5+, which, naturally, affects female characters only. A secret setting awaits to be unlocked, making the breasts more akin to water balloons than anything resembling female anatomy. Hitomi Tanaka is not, however, a secret character awaiting to be unlocked.

DOA5+ plays exceptionally well. Its 60 frames per second gameplay carries over beautifully, and the Vita’s directional pad and face buttons are suitable for even the most deft combos.

The character models are outstanding, and the dirt and sweat options are here as well. Fine detail isn’t as meticulous as the console version, though all things considered, the models found in DOA5+ are the most impressive you’ll find on the Vita. Thankfully, all the characters are available from the start, with no Story Mode progression necessary to select them. And if you’re inclined to replay Story Mode, or if it is your first time through, you’ll find the cutscenes are virtually identical to the console version, with fantastic image quality throughout. 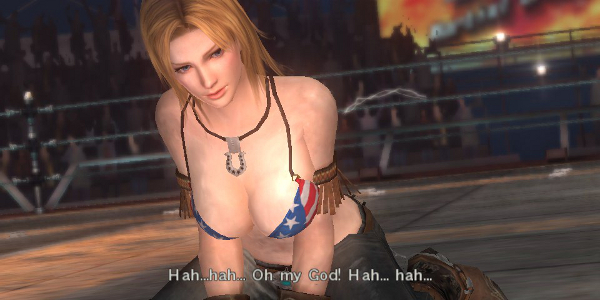 The stages are all present, and Zack Island, which was downloadable content for the console version, is here from the outset. The stages are as impressive as the character models, with only slight downgrades found in their presentation.

DOA5+ would be a stronger title than its console brethren if it included online lobbies and tag play. As it stands, the additional content found in the Vita version may not be enough to offset what was removed, especially if your main interest is fighting online. However, it does not detract from the quality of the actual port, which is exceptional in its execution. It looks great and plays great, and if you’ve already purchased the PlayStation 3 version, the Cross-Save and Cross-Play incentive makes taking another dip a relatively easy decision to make if you’re interested in Dead or Alive on the go. Newcomers to the series will benefit from the revamped training modes, and have a wealth of content to experience and unlock.