Scribblenauts surprised gamers with the ability to write virtually anything that comes to mind in Max’s notebook and have it pop into the game to help solve puzzles. That concept has grown beyond just being confined to one level now and the game worlds introduced in Scribblenauts Unlimited are a welcome addition. This is especially true since the game is available for Wii U and PC, as well as DS this time around.

Lily, Maxwell’s sister, had a curse placed on her by an old man Max played a trick on. Unlimited focuses on Max going out into the world to try and do good deeds. Making people happy in the world of Scribblenauts nets you Starites. These star shaped objects will hopefully cure Lily’s condition. So Max sets off to learn the hard way that you should probably just be nice to people in the first place; that, or use your magic notebook to summon Cthulhu on them. Yes, you can summon Cthulhu. 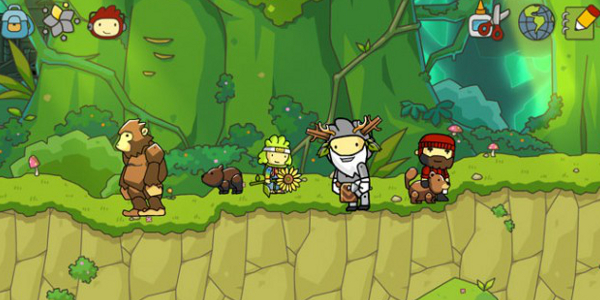 Puzzles range from just coming up with something the person would like, to helping them in various ways. Super Scribblenauts, for the Nintendo DS, added the ability to include adjectives for objects you created from Max’s notebook. It’s handy for even altering Max. Make a floating or flying Max and travel becomes a lot easier. Just don’t make a ghost Max–you can fly, but it really freaks people out. Unlimited goes a step further allowing you to edit objects to make into your own, with a variety of parts that you can save and share! The mode is actually quite detailed, letting players mix and match parts on objects, color them, and even decide different things like how others react to the object.

In general, you have many options when solving the games many puzzles. Each area has people you can assist for Starites. You’ll probably get so caught up in helping people, you’ll try to solve problems that aren’t even part of puzzles. Some objectives are just small tasks that net you Starite shards, which become one Starite when ten are combined. Other objectives are full tasks that give you an event to play through. All these happen in decently sized levels comprised of several objectives. You’re free to explore these levels, and even continue on if you wish without completing all of the areas tasks. 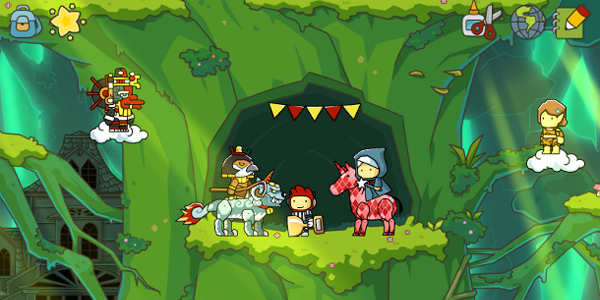 More areas are unlocked as you continue to grow your Starite collection. However with how much fun different tasks are, you’ll probably find yourself seeking out all of the NPCs each level has to offer. A world map lets you quickly get from one area to the next, but it seems all areas are linked together via some form of path to follow from one area to the next. This really adds a nice open world feeling to the game, linking all the areas together even if there is a transition between them.

There are even achievement-esque goals called Merits. These are quite fun to unlock, using clues to attempt to solve them at any time. I found myself going back to the farm Lily is waiting for you at and just doing random Merits for fun. It’s definitely a fun diversion and a great way to play around with the notebook.  Merits are not new to the series, but it’s great to see them included in this version as well.

Playing on the Wii U is a joy. Scribblenauts Unlimited has an audience display on the television, letting the whole family watch the action and see what is being typed out via a bar across the middle of the screen. However on the Wii U GamePad, all of the other goodies are displayed that are important to the player. You’ll type in your words on the touch screen, use a scanner to locate new NPCs that give objectives, and various other info. So it really makes the game fun to play with a group of friends shouting suggestions together. 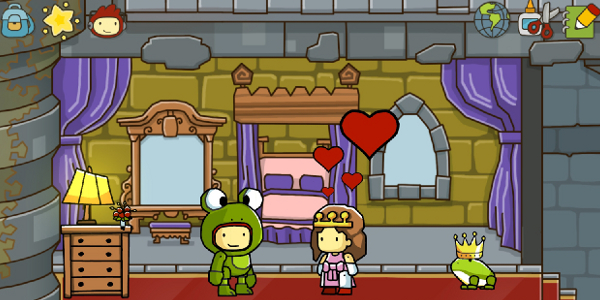 The only part that I struggled at with was the odd time I thought something should work, but it didn’t. I found myself thinking more basic as the game went on. Of course, with so many options the game can’t account for every possible answer to each puzzle. You can be creative, it just takes getting used to the abilities of various items. For a game that lets you create a person for a cannibal to nom on, I can’t really complain.

Scribblenauts Unlimited is fun and addictive. After my first time trying out this latest entry in the series at a press event, I found myself searching for my DS copy of the original. Once you give it a go, you’ll want to keep solving puzzles and seeing what else the creative world has to offer. From being able to create so much, to even having your notebook pop out new clothes for Max, there is lots to do! Even helping Maxwell’s family members that are scattered around the world unlocks new characters for you to play. There is a ton of fun to be enjoyed here and many areas to explore. Adventure and puzzle fans should definitely check this title out!