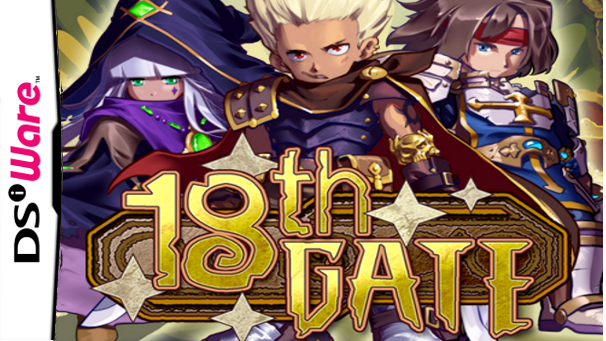 What’s the first thing you do when you buy any new game? You look at the instruction manual from cover to cover before even turning on the game?

Okay, not really. The reality is that most of us don’t even crack the cover of the instructions unless we want to look at the pictures or if the game has a complicated and sometimes confusing controls *Ahem, sports games.*

Let’s face it. Most games are either really intuitive or guide you through the basic steps to playing the game without spoiling anything.

Most games. Not this one.

Don’t let that scare you away, 18th Gate is pretty fun and has a lot going for it. But it does have its flaws with one of those being a lack of instruction.

Selecting a new game will start with a bit of text explaining the basic premise. 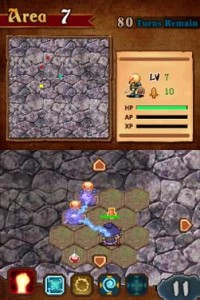 “Welcome to the realm of oblivion. This was once a great palace, but it was abandoned after a wave of mysterious monsters invaded it. You have no choice but to get out of here by entering the terminal. The first step is to tap your character.”

After that the entire first level is a step by step tour of how to move your character, attack enemies and a basic overview of items and beating a level.

But that’s it. After that you’re on your own to figure it out.

As was alluded to earlier, more information about the characters and actions are in the instructions included in the game, but unfortunately they can’t be accessed while playing the game. With a physical game you can simply pick up your booklet. With a downloadable title the ‘help menu’ should be easily accessible.

You have to quit the game and access it from the main menu, which is frustrating since the in-game experience is missing key things such as labels that would have made the game easier to understand.

There are three types of players that are used throughout the game, though the first level you only play as the Knight. Once he (you) completes the first level, the second stage has an entirely new character, with no explanation as to who he is. This second character is a Treasure Hunter.

After the two team up for the next several stages, you will play as another new character, this time a wizard, in the fifth stage. There is again no in-game explanation as to who she is or where she came from.

The game could really use some sort of backstory. Oh wait, there is some backstory contained within the bios of the characters. Again, only in the help guide. To be honest, I’ve never even had to look at the help menu in most games. 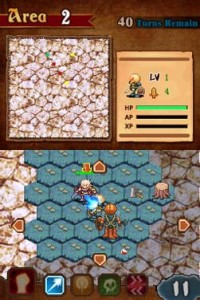 Each of the three characters have five actions that they can complete, depending on where they are. The bottom of the game screen shows the action icons which are without labels to explain what they do. The red button with the fist is the attack button, which was explained in the tutorial. The rest are unknown unless you play around and waste valuable turns or exit the game and refer to the help guide.

One thing that makes the game tricky is that each character is limited in vision. Only one tile around the character can be seen, although by finding the torch can temporarily expand what a character can see. The treasure hunter also has a skill (that I didn’t know until writing this review and looking over the help guide) that can temporarily reveal a part of the map.

Using this skill will consume AP, which is like magic or skill points. These can be refilled by finding blue bottles on the map. 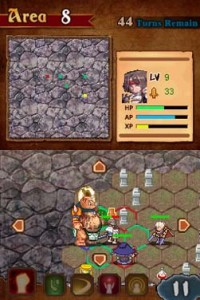 As per the standard for RPGs or turn-based strategy games, defeating enemies will gain your character experience, which will level your character and increase their HP and attack power. Much needed as further levels have much tougher enemies.

One thing which is great, though can be challenging, is that enemy and item placement is randomized for each level. The layout of the stage, location of the goal, and starting point of your characters is the same every time; however, each time you restart a level, what you’re facing is different. This can be great for the player that looks for a challenge, but if you’re struggling to beat the stage it can be grueling.

If you are about to die in the level though don’t quit and restart. Let yourself get defeated first. If you are defeated you will keep all of your stats (attack and level) when you retry. If you quit and reload your game you will start from that save point.

Failing can actually help you in the long run. And, while you can’t go back and replay a stage to level up your character, you can do the typical thing and grind your level. If you reach the end portal and have a lot of turns to spare you can start attacking the leftover monsters until you are close to the end of your available turns. It won’t help a lot, especially since only the character who deals the death blow gains experience, but every little bit helps. You may also stumble over the ‘hammer’ item, which permanently raises your character’s attack by one point.

The controls are pretty basic with everything based on touch and tap control. Touch your player to select him and tap where you want him to go, or attack. Select your target first and then tap on the appropriate action button to perform an action.

For the most part the buttons aren’t used, except you can press the (X) button to centre the map. The d-pad can be used to move around the map (which can also be done via the on-screen arrows).

The help screen also states that pressing (A) opens the menu and that (B) is used to skip your turn, but neither button does that. Pressing (A) displays the enemies health bar above them while (B) removes this. There is no way to skip a turn aside from ‘attacking’ an empty space.

The sprites are very basic with short animation loops. The backgrounds as well are also very plain and simple, but does have the look of a simplified Game Boy Advance role-playing game. The music and sound effects are passable but nothing noteworthy.

Also it’s hard to distinguish at times between the active visable area and what is in the ‘shadows’ as they look very similar. It would be easier if the background were more distinct and darker.

I’ve yet to beat the game, though I did start over after getting most of the way through, once I discovered the help menu explained a lot of the actions that I hadn’t used. So, in that way I guess it had replay value.

Everyone demands that every game meet the ever rising standards of game design. Not every game can be a Final Fantasy Tactics and this game clearly isn’t. But when you look at the game versus cost this isn’t bad, considering you’re getting a full, playable game for not a lot of dough. I’ve played a lot of clunkers