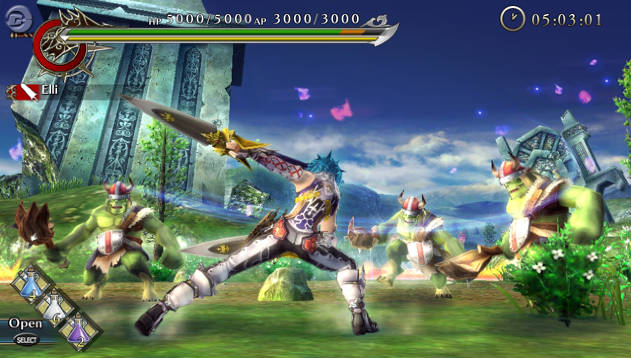 Everyone has their own vices when it comes to video games. Whether it is killing civilians in Grand Theft Auto or enjoying social media games, there’s a guilty pleasure you don’t really talk much about. My guilty pleasure has been mob grinding dungeon crawlers filled with lots of loot and potential upgrades for my character. Sure, it is a JRPG sub-genre that doesn’t get a lot of attention, but that is why I was so excited to hear that Xseed was bringing Ragnarok Odyssey to the West. Unfortunately, I haven’t been this disappointed with a game in quite sometime.

To set the stage for why I was so disappointed in Ragnarok Odyssey, I’d like to talk about my previous experience with the genre. Unfortunately, I missed the whole Monster Hunter craze and most of my mob grinding sessions have been hundreds of hours logged in Sega’s Phantasy Star series and Blizzard’s Diablo universe. This is not to say that I expected these experiences to translate over to Odyssey, but if I had to identify three tenets that all loot focused games should focus on, they would be a concise and understandable upgrade system; consistent character progression (you want to feel like your character is growing in strength), and detailed quests that are up-front with their requirements. As it turns out, Odyssey has more in common with Capcom’s Monster Hunter than I thought, but we’ll get to that.

The world of Ragnarok has been with us for over a decade so the developer had a chance to tap into a wealth of lore and back-story to keep fans happy and inform those of us who missed out on the MMO of the same universe. Sadly, for gamers who have nothing invested in the world,Odyssey’s story isn’t going to keep many glued to their screens. Right off the hop the player is tossed into a guild chamber, and here they’re informed that they are the latest recruit in an effort to rid the land of a monster epidemic–everything from slimes to orcs have been terrorizing the populous. This paper-thin narrative never really goes anywhere, and after the first hour you’ll start to feel like you are making progress clearing out the various zones of monsters, only to have the same maps with different monsters be utilized in subsequent quests. 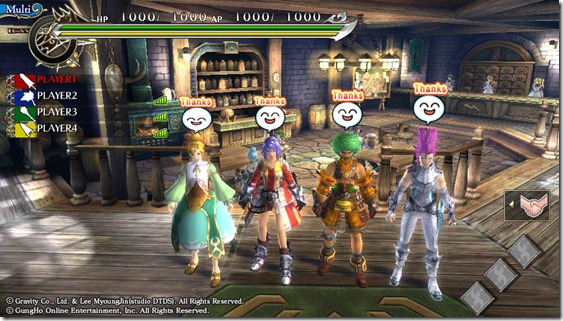 The supporting cast of characters are your typical anime stereotypes: a no nonsense guild leader who is headstrong and wants the player to prove their worth; a woman who wants to prove to the guild that she is just as strong as her guild-mates; and a cavalcade of supporting characters who range from dimwitted to bubbly and cute. For the most part these archetypes work well given the role of the NPCs, but the problem, like with the story, is that these personas are paper thin. We do not get to learn the interests of the NPCs; there are no major plot lines involving them and they don’t grow. They serve their desired function–informing the player, selling items–and that is pretty much it. One strong point, at least for me, was the way characters express themselves with over the top body motions and anime mood bubbles. A cute nod to some of the genres that inspired Ragnarok and it gives the game a bit of personality.

A bad story isn’t necessarily a deal killer when it comes to this type of grinding game. Fans of the genre have come to expect repeating environments and re-textured monsters. I’m someone who got to level 100 in Phantasy Star Online v2 and that game only had four zones, each with their own extra challenges filled with re-skinned monsters. It is not so much the repetition that kills Ragnarok Odyssey or the core gameplay (which I will get to in a moment), but the vagueness. You see, in a game like this, crafting is key. Not having a traditional leveling system means that if you want to upgrade your weapon, fashion some new clothing, or complete a number of the quests, you are going to need specific items. Ragnarok Odyssey makes these objectives as difficult as possible by not informing the player which monsters drop the required items for crafting, and in many instances crafting recipes will be unlocked that require components from future quests. This is also an issue when it comes to quest objectives, because without a sense of where needed items come from you’ll end up spending your time killing dozens of monsters collecting unrelated loot. 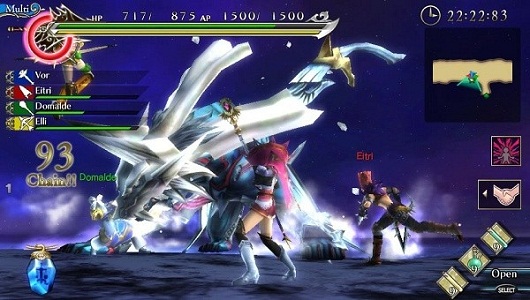 One of the strong points of Ragnarok Odyssey is the core gameplay and combat mechanics. If you can stomach the vague quest outlines and loot system you’ll find an interesting take on action RPG combat. You’ll control your character from a behind the shoulder view and attack enemies using either ranged magic spells/bows or swords depending on your chosen class. For the majority of my time with the game I played the warrior class, meaning I wielded a sword larger than my character. Building combos using light and heavy attacks can be quite fun, and the ability to launch enemies into the air à-la Devil May Cry brings a new dynamic to dungeon crawler combat. This enables you to build up a high multiplier and then launch one or two enemies into the air and continue your assault without the worry of another enemy breaking your combo by attacking you from behind. Add in a mode that enables you to enter a state of increased speed and attack in exchange for hit-points and you have another tool to spice things up. If the designers of Odyssey got one thing right it is the combat.

At first glance, the character upgrade scheme in Ragnarok Odyssey seems confusing and frustrating, especially when you are playing through the early parts of the game. You still have to manage the standard RPG stats–HP, DEX, DEF, Speed, AP (action points), Strength etc. – but how they are managed and increased is where Odyssey attempts to change things up. There are no levels which means that killing dozens of monsters does nothing but provide you with loot. Instead, your base stats are boosted by completing story chapters. This means that, for some players, the carrot on the end of the stick of grinding levels to complete quests is lost. In place of your standard leveling, each outfit you have for your character has a number of slots where special cards can be equipped. These cards will raise your key stats and this gives the player an unparallelled level of control in regard to their progression, but the pay off to building your ultimate character can take forever, given the previously stated vague nature of drops and materials needed to craft new cards. This system is not perfect and will seem rather obtuse; at first I was not a fan–in fact I hated it–but sticking it out I finally found a build that worked for me. 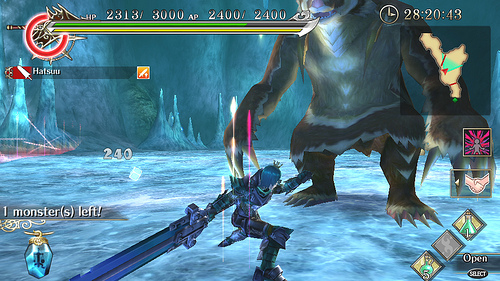 Character customization also plays a large part in Ragnarok Odyssey. The game really does want you to make the character your own creation, and similar to Phantasy Star and Monster Hunter, there are dozens of hair styles, faces and clothing options available. Like the weapons and cards, a lot of these options are hidden behind vague item drops needed to craft some of the cooler looking outfits. Also, since the number of equipable cards is tied to an upgradable stat on your outfit, it is best to find an outfit that suits you before you decide to max it out. While playing I ended up nearly maxing out my first outfit only to later find one that fit me better and I had to start the whole thing all over again.

Odyssey also supports a strong online component. The majority of my play-time for this review was spent playing the game offline, but for those of you who want to form parties of 1 -4 the option is present. Some of the encounters, namely the boss fights, are designed to be handled by four players rather than solo’d. Defeating them solo is possible, but it requires specific strategies. There was very little lag during the few boss fights I played online; there were no disconnects and it was a lot of fun coordinating things together. If you are in the game to complete full sets of the highest level/rarest gear then you’ll find yourself wanting to invest in one of the several online communities of players looking to trade items and do some of the hardest quests.

Fans of dungeon crawlers and crafting based RPGs are obviously going to be tempted to pick up Ragnarok Odyssey. At the end of the day, it is hard to recommend this game to anyone but the most hardcore loot fans or those who are heavily invested in the Ragnarok franchise. If you have no connection to the MMO and have very little of the world explained in-game, you may have a hard time feeling invested in the paper thin narrative Xseed has decided to utilize. Also, the abandonment of a traditional leveling system leaves little reason for players to pick up the game and grind away. It makes tasks like destroying every monster in sight seem meaningless, especially when the game does a poor job of explaining how crafting and advancement works. If you can forgive all of these flaws, there is some fun to be found in its very strong combat system and grind to collect items.