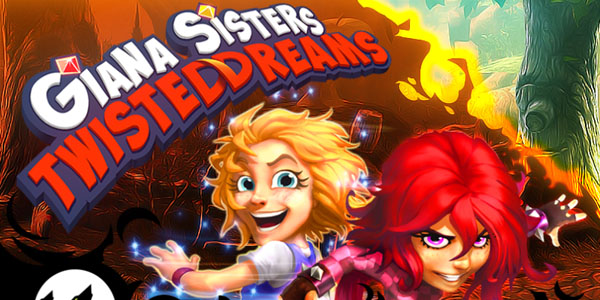 Giana Sisters: Twisted Dreams is an incredibly challenging platformer for gamers who also enjoy puzzles. It doesn’t seem that harsh at first, you’re bounding through fields, going through the basic game mechanics to learn how Twisted Dreams is played. Then it hits you as you start getting into the castle levels, and only hardcore gamers need apply.

Lets take a step back. First off, the original Giana Sisters is an old Super Mario Bros clone (as even noted by it’s creators) made back in the 80s. In the original, instead of growing when you obtained a power up, you turned from a cute girl into a punk. Getting hit would revert you back to your cute form before you died. Twisted Dreams adds a swapping mechanic that allows you to turn from cute to punk and back again at any time.

The big wow factor that comes out of Twisted Dreams right away is when you change form the world reflects that characters nightmare. So the world is happy and cheerful for the punk girl, and a fearful dark place for the cute girl. The visuals bounce between the two forms as you switch, with everything becoming rubbery and changing into it’s switched form. I mean practically everything too. The background takes on the most dramatic change usually.

This is also how Giana Sisters: Twisted Dreams works in it’s puzzles. Some gates only open for the opposite girl, twisted spike vines curl away to allow safe passage, or ghosts simply become transparent and lose interest in you. These abilities keep you constantly thinking, as the cute girl can do a slow falling spin move, and the punk can turn into a fireball and rocket in the direction you point. Each of these skills is set to a separate key, and when triggered you’ll change forms if you’re not already in the form to use that skill. You can also press a button to swap at will at any time, including in the middle of a skill move. So you can slow float as cute girl, and then swap to punk mode to collect red crystals that only she can collect.

The story is basic just featuring an action based sequence which shows both sisters sitting on a bed. A crystal floats by and becomes a portal after being inspected by one of the girls. One of them is pulled in, and the other follows. Hence they’re off on an adventure in this new world.

Crystals play a big part in the game. The punk version collects red ones, the cute version yellow, and blue crystals are collectable by both. So you can swap between the two characters for maximum crystal collection and then use your collection to access locked boss levels.

It total there are three worlds to Giana Sisters with about twenty three levels. However as the game progresses these levels do become very big. From puzzles to collecting keys to unlock boxes that block your progress. The occasional time you’ll more than likely be slowed down to try and figure out what to do to continue on. Most of the time you just need to figure out what move or action you need to progress.

In general, Twisted Dreams is a fun game with interesting level design. Other times, it can be a challenge trying to get past certain ledges or sections, only to die at the other side and realize you haven’t hit a checkpoint yet. Even in these instances though it does seem like the game is just trying to challenge you. After a difficult section that you’re geared up after finishing, there is usually an enemy or two to try and catch you off guard if you don’t take the time to settle down and move on to the checkpoint.

If you’re looking for a challenging platformer with levels you’ll probably replay to get more crystals to advance forward, Giana Sisters: Twisted Dreams is a fun adventure. However if you do tend to get frustrated easily, you may want to look elsewhere. Personally I made it up to the end of the second world. Which isn’t bad, but I realized by the time I reached the locked level at the end, I didn’t have enough crystals. I should have been taking my time and collecting more as I advanced through the levels since you do have infinite lives. I didn’t and so now it’s time for some backtracking. I’ll probably get back to it since I do want to see how the game progresses, and as I said, it is an enjoyable experience. When do you finally get past a tough area, it does feel rewarding. It can just be painful if you haven’t been collecting crystals and realize you now have to go back through those challenges. Well, hopefully they won’t be as difficult the second time.

The game also provides giant crystal collectables to find that give you new artwork for the in game gallery. There are also several various play modes you unlock along the way such as score attack, which gives you points for collecting gems quickly, and time attack which asks you to just plow through the levels as quickly as possible. To add more challenge, there’s hardcore mode which removes checkpoints and then uber hardcore mode which restarts you on level one if you die. I have to admit, if you beat that, you’re uber hardcore.

If you’re looking for a new unique platformer, give it a go. The game is fun, charming, and has unique concepts with a story told through action to make it internationally understandable. Definitely be ready for a challenge though. You have unlimited retries to try to progress, but you still need to do some of the tricky sections that can have you replaying areas quite a few times.