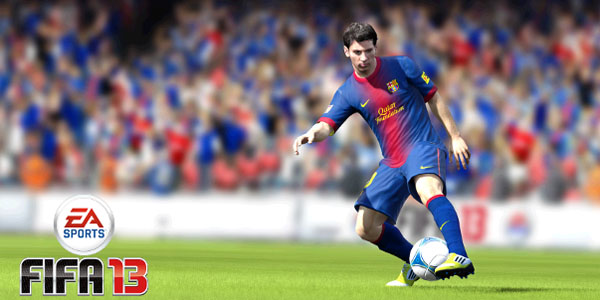 FIFA 13 is a solid soccer game with lots of depth and the key to playing the game is to remember the old phrase that “there is no I in team.”

While that may seem like a silly thing to say when playing a single player game the game is much more satisfying and you will have more fun playing if you let the other game controlled players on your team take part in the defending.

Unless you’re a skilled FIFA pro and have hours and hours of game play under your belt, and aren’t a rookie such as myself, the skill and ball control of the computer opponents can deke right around your defender.

Play as a part of the team and not the only player on the pitch and you’ll have better chance at success.

There is tons to see and do in this game. FIFA 13 boasts a ton of online presence, but I’m going to focus on the core single player offline presence of the game for this review.

(Full disclosure: Unfortunately a 360 version of the game wasn’t available for me to review so I was given a PS3 copy by our staff. I had to borrow another colleague’s PS3 and didn’t want to set up an EA Origin account on their console.)

For any new player to any game there should be a solid and comprehensive training system in place and FIFA has this in spades. Good thing to, because the game has so much depth to it’s control scheme that just jumping into the game will leave you a little puzzled.

But once you take the training courses, which amount to a series of mini-games, you’ll be on your way to success. The training courses include ball control, crossing the ball, different types of shots, passing the ball and kicking penalties. Think of them as the sort of mini-games you would see in a “Mario sports” title, but with a reason to exist other than something to pass the time.

I’ll admit that when I played one of my first games and managed to end up in a 0-0 draw which resulted in penalties I was screwed. I had no idea how to kick the ball towards the net and every shot I attempted was launched somewhere into the grandstands.

This was frustrating. Something so simple should not require a training course.

But once you do take the training courses the shots are done with ease. Luckily I had already played the mini-game for defending penalties so I at least stood a chance.

I lost the match 1-0 after penalties and let in 2 of 5 shots. As expected I didn’t make a single shot.

The games controls are as deep as they are complicated.

You will have to participate in the training modes to fully appreciate their complexity and need practice to seize full control. With that said passing and shooting are a breeze and are very intuitive for any first time player.

It’s tough to resist, but if this is you’re first foray into the FIFA series take some time and go through the training modes before you start playing. It will greatly increase your skill level and improve your play.

Let’s face it. If all you can do is pass and shoot you’ll have a rough go of it and won’t keep playing when your opponent keeps creaming you on the pitch night after night.

Some of the more complex plays require a lot of practice to pull off during a match.

Back to the statement I made earlier surrounding letting your other team members play, one of the first things I did when I got into a game was change the option for the game to auto-select the player I was controlling.

The default setting sets the game to change the player you are controlling to the member of your team closest to the ball. So if you are running with player “A” towards the ball and player “B” ends up closer to the ball the game will change your control to this player.

The only problem with this is usually this “B” player is running the opposite direction than the player you’re already controlling. This causes a frustrating effect as since you are still holding the analogue stick in one direction before you realize the switch, the “B” player ends up running away from the ball before you can change direction. A “parting of the sea” results with each new player running the wrong way before you can correct each time.

Changing this setting to manual change allows you to pick your spots when to manually control the defender closest to the ball and also allows your computer defenders to do their job.

This isn’t a one-man show and your other players do a pretty good job of defending in most circumstances.

The game looks goregeous and the presentation is stellar. With the game’s presentation co-branded with ESPN, playing the game has the look and feel that you are controlling real players on a real pitch. The motion of the players, the lighting of the environments, the weather and the stadiums all add to realism of the game.

I’m not sure why FIFA got the co-branding while the Madden property did not. ESPN broadcasts the NFL as well as MLS soccer matches. For that matter it would have been nice to see EA Sports localize the game in Canada and use TSN graphic presentations or at least made these an unlockable or DLC option. Even with the same commentators as a Canadian I would have appreciated it.

The commentating is minimalist in the game which compliments the game greatly. Soccer matches don’t need an over abundance of chatter during the match and the snippets of dialogue are precise and adequate.

Once you get knack for controlling your players, learn to score a few goals and can get yourself into the win column a few times the game becomes fun to play. Of course progressing through a season to win the championship certainly adds to the replay value, but the game has great pick up and play appeal.

The added bonus of adding MLS to the game definitely gives the game some added market appeal in North America for those new to the game who may not be familiar with world football.

It might be good for EA Sports to play this up a bit more next time though as until I had the copy in my hands to find the MLS logo on the back of the box, I had no idea the league was playable.

Perhaps FIFA 14 could have an MLS star on the cover.

As someone who isn’t really that much of a follower of football around the world, I greatly appreciate the fact that MLS is included in FIFA 13.

One this that was a bit of a head scratcher was the lack of team Canada in the game. Seriously, where is Canada!? There are multiple leagues included from dozens of countries all over the world but no national team from Canada. It’s a slight oversight that hopefully will be corrected in next year’s incarnation. I’m of English and Irish decent, but as a Canadian who identifies more with my home country than my ancestral heritage, would rather play as Canada than England.

Great game overall though. Lots of fun, plenty of challenge and a learning curve that makes it tough for newcomers but not too steep to put off new gamers.