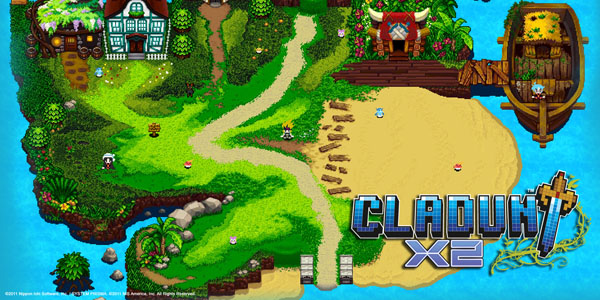 ClaDun x2 is a fun and portable (if you’re playing the PSP version) adventure in the latest action RPG system from NIS. Much like the PS3 release of Legasista on PSN, ClaDun x2 lets you explore random dungeons, enjoy an unfolding classic NIS storyline and get to know a complex but enjoyable system.

I’ve been playing the PC version which comes with a handy option to upscale from the original PSP sized resolution by double, or to go full screen but unfortunately that didn’t work well for me. Potentially it’s more for HD sized monitors more scaled to the PSP’s screen. 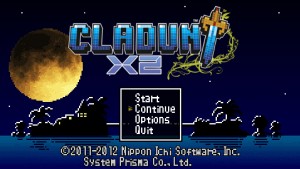 The game allows you to create a character at startup with a good array of options. Various character sprites and palette swap options give you a mix of choices. There are seven classes to choose from, each with their own bonuses and varying stats. Fortunately, ClaDun x2 allows you to make more characters after you get into the game, and swap the main character as you wish.

You’re dropped right into a tutorial dungeon that leads out to your new home, the island of Arcanus Cella which you, and all of it’s inhabitants are trapped on. As usual with NIS games, the cast is fun and colorful with lots of quirks. Unlike the sprouts of Legasista, ClaDun x2 includes some bird NPCs to talk to, and later on get information, titles, and random dungeons from. 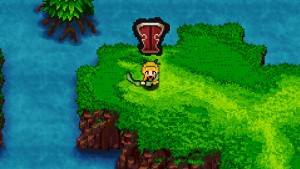 Titles are bonuses some items come with. They can be stored via an NPC store, and with enough multiples of a certain title, can be assigned to other items. The items you take the titles from are destroyed however, but there’s lots of loot to be found in ClaDun x2, and like seemingly all NIS games you can go back and replay previous areas as you desire.

At it’s core ClaDun x2 is a retro styled level grinder, but with so much content unlocked as you play it does keep you coming back for more. There is skill to it too as you learn to outwit monsters weak points. It’s not just simply get in there and slash at your foes until they die.

The game uses what’s called a ‘magic circle’ system to add complexity to developing your character. Early on I found myself making new characters to use them as human shields in this setup. Basically magic circles are plus shaped formations of circles that you plunk your other characters into in order to gain stat bonuses and extra HP for your main character. Unlike Legasista, you don’t swap characters in this game during battle. Instead you use the HP of everyone you can squeeze into your magic circle. 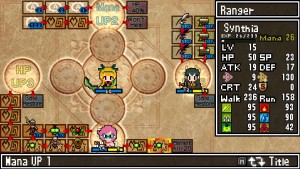 This probably all sounds pretty complex, and as you unlock more magic circles it certainly can become overwhelming at first. However like any great RPG once you learn the system it’s a lot of fun to customize and add to. Each character has their own magic circle too, so you can switch main characters out of dungeons without worrying that you’ll lose all your hard decided magic circle placements.

Dungeons in the main game are relatively simple, with the expectation that when ran-geons as random dungeons are called become available, you’ll dive into them. Regular dungeons tend to be a quest to find the stairs out on one floor. Ran-geons are split into two categories, Neo-geon’s and Tri-geon’s. Neo is straight forward like Legasista, but with less gates. Neo focuses on 99 floor dungeons, and while this sounds incredibly overwhelming it’s less so than you’d assume. Each floor has multiple gates that take you to the next floor, or beyond depending on the stats you roll at the gate screen between floors. Gates come in various types and change your chances of finding good gear by adding to or subtracting from loot drops and rare title finds. Enemies can also gain higher levels each time you progress. 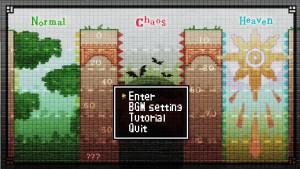 Tri-geons on the other hand are a complex thing by adding transition halls. Dungeons become split into normal, chaos, and heaven sections. Normal, is well, normal and allows progress to chaos. Chaos is ‘painfully hard’ yet reaps good rewards and allows possible progression to a heaven hall. Heaven areas are seemingly the best area for rewards and will drop you back into a chaos area only.

All dungeons are packed with traps that your character can see as they get close to them. Some hurt you, some are beneficial, and they do a good job of keeping you from speeding through dungeons especially on your first play through. Enemies are various and different colors meaning higher strengths. They do also have a field of vision, so you can actually sneak up behind foes and defeat them with stronger attacks from behind or to the side, much like NIS tactic games. 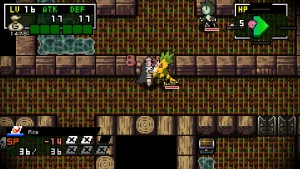 On top of the pallet swap options, you quickly gain the ability to edit your characters facial appearance too. From simply adding a pair of glasses or a headband to your character, to giving them a full makeover with the games paint program, artists can quickly get lost in ClaDun x2. You can export the art to a BMP file too if you’d prefer to use your own software to spiff up your character. Unlike the more modern art of Legasista however, I found ClaDun x2 to be fun enough to edit in program. It probably helps that in the PC version you can use the mouse as well. Weapons, shields and armor can also be modified into your own creatively imagined gear.

The art itself is beautiful, calling back to the 16-bit days. It seems that was the inspiration behind the ClaDun series and thankfully it has made the progression into Legasista keeping this new NIS system progressing into new games. I’m really enjoying this change. As much as I love the Disgaea tactical system, the ClaDun system has it’s own quirks to keep me coming back for more. 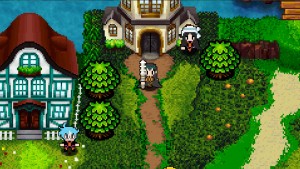 What makes ClaDun x2 such a quality product is that you have a base NIS game here, and as usual so much to do otherwise. If you get bored of dungeon crawling you can even compose your own music using a variation of Music Macro Language. The game comes with more modern music, or a chiptune soundtrack to enjoy.

Occasionally I did have a crash. A few of these happened when I was away from the game, but it is a good idea to save often. I’ve read of a few problems users have had in general, so you may want to download the demo to test out the game on your system before buying it.

Lastly, if you’re like me, you’ll be confused and probably frustrated by the controls at first. I was tempted to just change them right from the start, but as you play with them, they really do feel right. You use WASD to move around and JKL as your main action buttons. U is used to pull up your menu. Just be careful in the config menu and use the mouse. Using WASD to move the cursor will actually change your key config.

$19.99 may seem steep for a retro styled game on steam, but if you’re looking for a fun dungeon crawl while you do other things online, or if you’re a hardcore NIS fan, this is a fun addition to your collection. The price may seem higher than most download titles but this is a big NIS experience with lots of goodies to explore. So you will get your monies worth with your time spent in this game. Hopefully this is the first of many NIS titles to come to Steam.