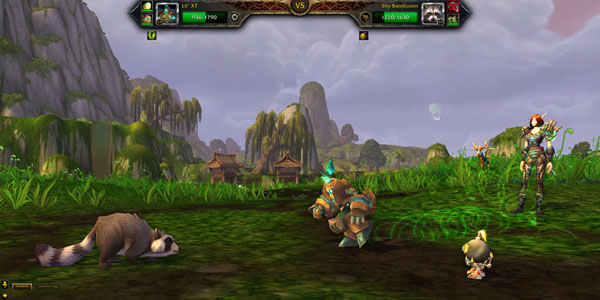 The magical words appared in World of Warcraft announcing Mists of Pandaria had launched! Sadly I watched as my guild mates ran off to make Pandaren monks, however I figured I’d go check out the action around Stormwind. I was delighted to learn that Battle Pet Trainers would train my character even though I don’t have the expansion! What followed has almost been an hour of awesome collecting action!

Naturally, if you want to discover all this on your own, you’ll want to consider the info below as spoilers. Now to begin with in my excitement I can’t recall the exact ammount but I eagerly gave sixty to eighty gold to the battle pet trainer and began my adventure.

My Dark Whelpling (which I’d spent hours trying to obtain in the wetlands) was decidedly my first pet that I plunked into the battle pet system. Nothing came up so I went off looking for critters. Quickly on the outskirts of Stormwind I found some rabbits and squirrels. They all had green paw markers floating over them and when right clicked a turn based battle began.

So your character has crates apparently to capture pets. When the health of your opponent gets below a certain point you can attempt to capture them, gaining a bonus for each round you fail to catch your target. At these early levels, it was easy to snag the pets up like crazy. It’s helarious too the first time you see your character toss out a crate like a Pokeball and watch it snap down on the critter you’re trying to capture.

Another sad yet funny moment was the first time my Dark Whelpling fell. My character began to cry and I was given the option to select other pets to switch to. You gain two extra slots as you level up your first battle pet. So my character in tears then calmly points for the next pet to rush out into battle. I just seemed so sudden in a comical way like, “Boo hoo hoo, next pet go!” Don’t get me wrong, it fits the quirky style of Warcraft.

Your pets can be revived via your pet journal. An icon in the top right heals all three current pets, not sure if it does any that are stored away, and then goes into an eight minute cool down period. Your pets do gain some health for winning a battle, and full health for leveling up.

So far, this is great! I’ve seen battles where a secondary pet joins in, seemingly when you’re taking on a wild critter of level six. The second critter waits it’s turn. Critters do level between zones, not as dramatically as monsters do but in smaller sets. So the area around Stormwind was level one, Westfall level three and Darkshire was getting into level six. This is a nice progression and encourages you to go back through all these areas.

Critters do show up on your mini map and you’re able to mouse over and see what they are. This is helpful for diving in and battling a pet you don’t have yet. There are the occasional uncommons that I’ve seen so it is fun to search the land below looking for new critter friends you havn’t met.

If this is what is added to Warcraft without Mists of Pandaria, I’m eager to see what the new land has to offer. This already is a real treat added into an already fantastic game. I’d come to a standstill as far as collecting pets, which was a fun hobby in Warcraft. Now I can get back into it and enjoy finding all new critters to level up!