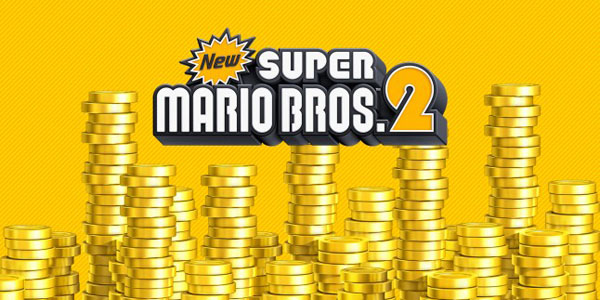 New Super Mario Bros. 2 is a true sequel to the original DS title, following a similar flow and feeling to the overall game. If you’ve been eager for more levels to explore in the traditional Mario platformer style, this game is for you.

There is a lot of content we’ve come to know and love in Mario games, as well as a mix of new surprises here. There’s red coins to collect in a short time frame, three star coins per level, and invisible blocks scattered about ready to be discovered. Building on that the prominent feature of this sequel is different methods of collecting coins.

New abilities include a golden block head Mario, which spits out coins the faster you run around. The golden fireball is probably my favorite though allowing Mario to turn blocks into coins with a blast when the fireball hit them. The white raccoon suit is here too, if a level seems to hard and you fail it three times. 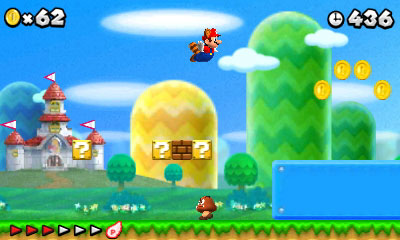 This gimmick works very well to expand the levels. It could just be the intense action that took place in New Super Mario Bros. Wii, but to me the levels in the 3DS title felt shorter. Of course though when you’re focused on hoarding coins, it keeps you exploring the levels longer. That’s not to say the levels don’t feel just right. More so I’d find myself in a hurry sometime and with that you can really breeze through some levels if you’re not focused on coins.

Which brings up the mode that allows you to collect even more coins! Coin Rush mode is accessed separately and allows you to add to your total coin tally. This tally is also carried over across all your save games.

Coin rush mode features three level packs, each featuring three randomly selected stages. You play through these under a tighter time limit. Touching the top of the flagpole or beating the boss at the end of a level will grant you double your coin total. So this is a speedy way to collect a lot of coins to achieve the million mark. Unfortunately the reward for one million coins or higher felt small to me, but if you’re collecting that many you’re obviously enjoying the game too much to care anyway. 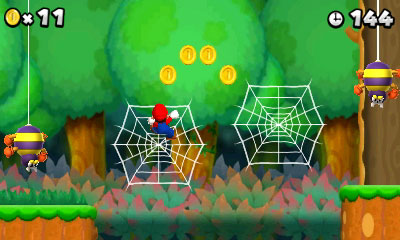 The solid gameplay and fun level design aside, this is a traditional Mario game where yet again Princess Peach has been captured. This time it’s the Koopa Kids who have nabbed her and this does play nicely throughout the game. They’re fun to battle again as bosses and the end game content with them feels fresh.

If you’re eager for more Mario, this is definitely an adventure you’re going to want to take. As you’ve probably read all over by now it doesn’t really break too much new ground but it’s worthwhile to add to your collection. Personally I think the game would have benefited from a stronger focus on why you are collecting coins. With so much emphasis placed on this concept, I felt lost in the game as to why all this was important. Even the game box asks you if you can collect a million coins, and the counter is just there, but there’s no real focus on this. I’ll be fair, I was the second person to play the cart, so perhaps it’s a first time loading story I missed, but otherwise I saw no indication.

Instead of focusing on gaining a million coins just for the challenge, I think it would have been fun if the Koopa Kids were holding Princess Peach ransom or such. Maybe they trashed Bowsers castle and of course they’re too lazy to collect the coins themselves so they kidnap Peach to get Mario to do the work for them. Just anything would have sufficed. Sort of the like the Wario Land games that this game instantly brought up memories of. That and I have to admit, I know everyone isn’t a fan of it but I really would have loved more Doki Doki Panic style Mario action and it is what I thought of when I saw the 2 in the title. 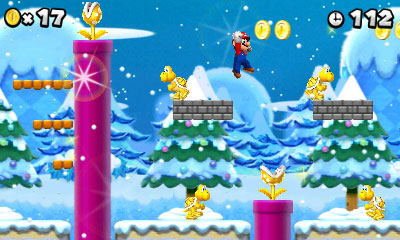 Again, all that aside which is more so nitpicking, this is a solid Mario game with longs of the NSMB content you’ve come to know and love. Don’t let this old timers nostalgia dissuade you, it’s a fun Mario game that you should check out if you’re a fan of the series. Get into it, enjoy the levels, and take your time collecting all those Star coins.