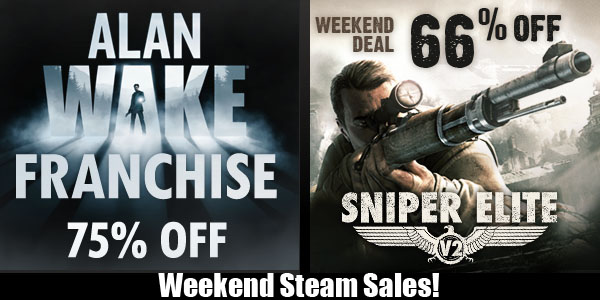 If you’re not suffering from overspending during the Steam Summer Sale this year, Valve has another weekly batch of weekend saving. Alan Wake, Alan Wake American Nightmare, and Sniper Elite V2 are on sale until the new daily sale goes up on Monday.

As of 1pm EST, Supreme Commander was added as Saturdays daily sale as well, going for only $3.74 USD at 75% off. For more details on the weekend sales games and pricing, read more.

Alan Wake and it’s XBLA continuation American Nightmare are on sale for 75% off, $7.49 USD. For those of you who havn’t given this series a chance yet, I’d highly recommend it. The concept may sound cheesy on paper, but the horror action and occasional comedy keep the story flowing and interesting. It really does feel like you’re playing out a horror movie with lots of great scripted events added in. American Nightmare builds on the concept even more, though does contain spoilers for the original game so you may want to play them in order. Admittedly, I played AN first but did still enjoy the whole experience though. The other big highlight of Alan Wake is the sprawling forest landscapes you’ll be fighting through. Areas are relatively linear but occasionally do offer some chance to wander off the beaten path for additional supplies.

Sniper Elite V2 was also released earlier this year. It’s currently on sale for 66% off, $16.99 USD. The sale does affect Sniper Elite as well, which is on sale seperately for $3.39 USD. I can’t speak too much for this WW2 shooter, only having played the demo. What I have seen was interesting though. The demo level presents you with a hitman sort of mission, focusing on following checkpoints and eliminating enemies along the way to the setup for your target. The shooting mechanics are where the game really shines. Focusing on easy mode for straight line bullet physics, to additional factors as you increase difficulty. That and the occasional skilled shot is shown with a slow motion bullet cam, sometimes even giving you an x-rayed image of the area on the enemy you’re striking. Perticularly well placed shots can even pass through enemies in this mode and the damaged bullet can still hurtle into another enemy behind your target.

Both sales wrap up Monday at 10am Pacific Time.