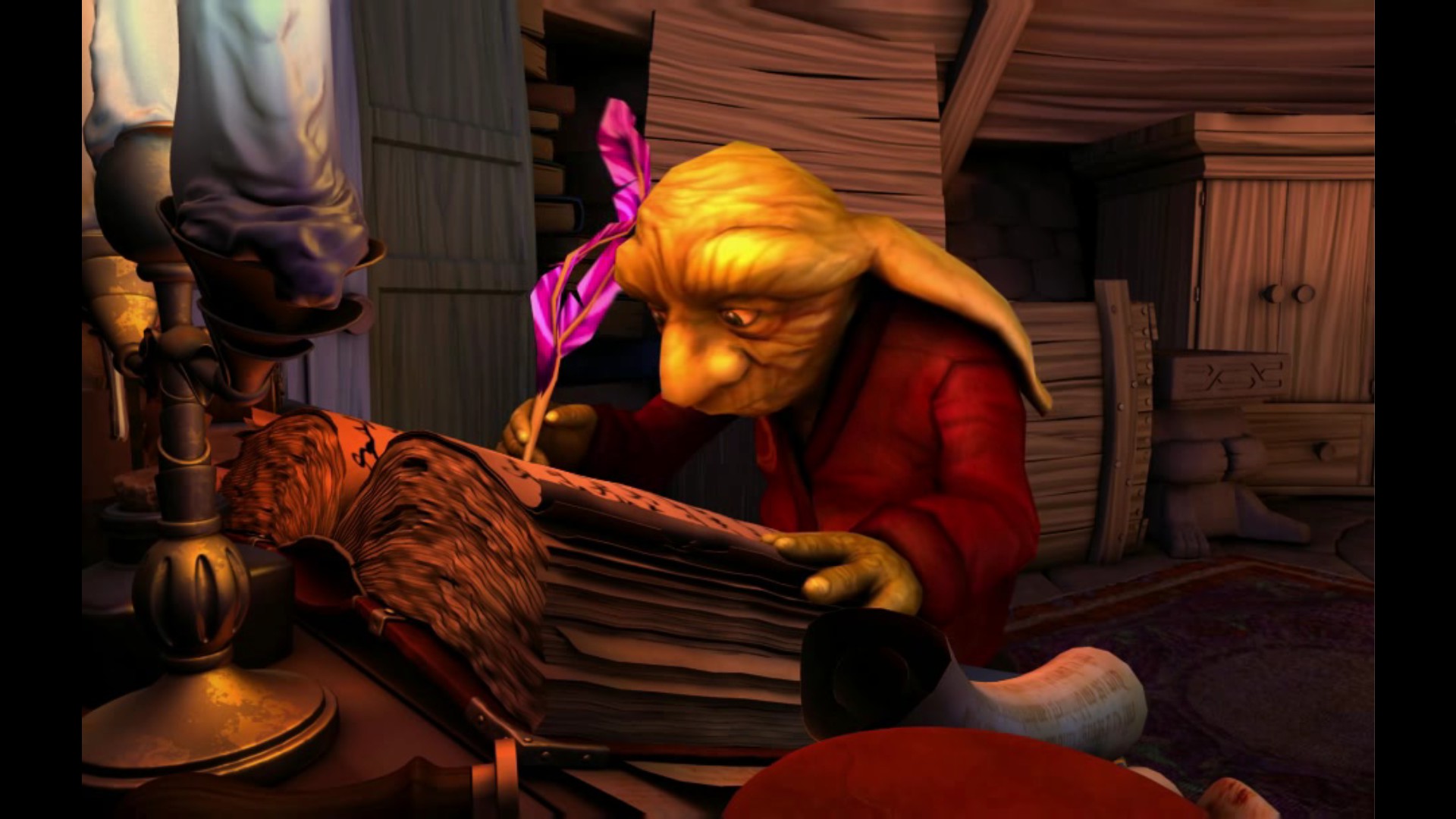 In the humble year of 2009 a little known German company, King Art, went forth on the great task of breathing fresh air into what has otherwise been a stale and stagnated genre of fantasy adventure. The journey was long, dark, and difficult. Undergoing deep research on  the tropes that brought stagnation into the genre itself. This time however, it the adventure genre is as refreshing as can possibly be. The Book of Unwritten Tales is a stimulating look at the fantasy adventure genre that gives the player a great story which is thick with parody that will give any fan of anything remotely fantasy sore sides from the quick witted and well placed humour within this fantastic title.

“The Book of Unwritten Tales” itself is a title that, despite it being a really great sounding name, will have you scratching your head. How could you possibly have a book of unwritten tales? This itself is part of the tone that the game offers; a high fantasy story that relishes in many of the tropes made by previous titles anywhere from movies, literature, and even other adventure games. Ranging from Star Wars to Kings Quest. Anything you can possibly imagine and there will be some sort of subtle allusion to it hidden somewhere amongst the 60 unique locations and 40 colourful non-playable characters within the deep, rich world that has been created to explore. 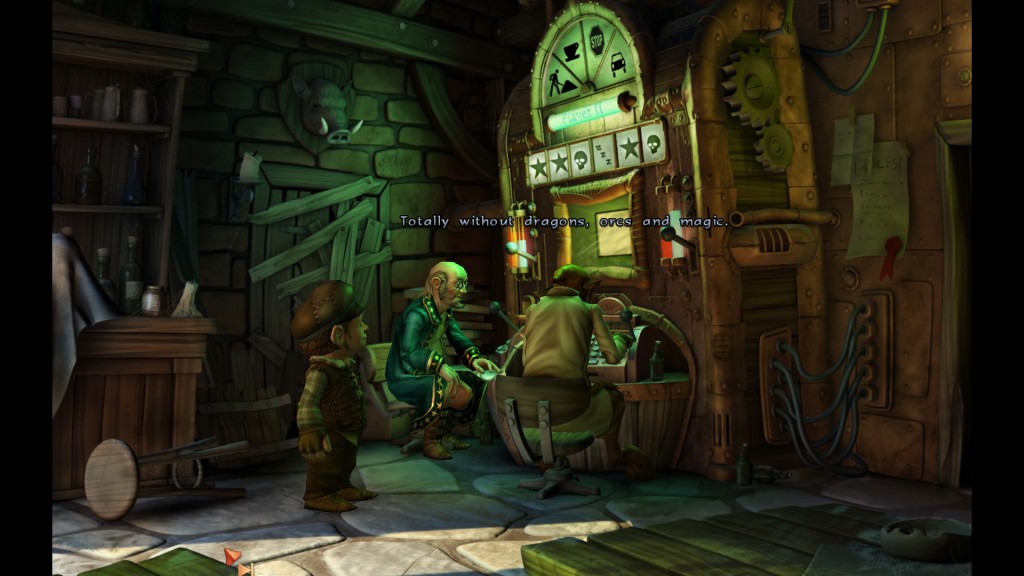 The game opens with an old archaeologist gremlin by the apt name of Maguffin, who has discovered the location of a powerful artefact that has been sealed away for millennia. It is believed that this artifact, the Artefact of Divine Power has the ability to grant the wish on anyone who possesses it. With this power the long war between the forces of good and the Shadow Army will finally be able to come to an end. However, soon after Maguffin makes his discovery he is kidnapped by the evil sorcerer Munkus so that he may find the artefact for his mother, the Arch-Witch Mortroga and win the war themselves.

Upon his kidnapping a young scantily clad wood elf by the name of Ivo is passing by as our villains are walking Maguffin out of his house and putting him into a cage, which is fastened to the harness of a dragon. After a spirited jump she makes it onto the back of the dragon and in an attempt to save the old archaeologist she is given a quest to find the location of The Artefact of Divine Power and to save the world, and to also release Maguffin by dropping him off of a mountain.

We are next introduced to our second hero of the story, a young gnome boy who is starved for adventure by the name of Wilbur Weathervane. Wilbur in his turn has his chance meeting with Maguffin and is given a golden, inscribed ring and he is told that he must take a journey to deliver to the ring to the Arch-Mage. Along the way these two heroes go on their separate paths to complete their given quests and in time encounter one another, along with a quick witted pirate named Captain Nate as they go on their journey to save the world.

If you are finding all of this perhaps a bit clichéd, then that is where The Book of Unwritten Tales finds its strength. The story engulfs the player into this fantasy world which makes an eerie kind of sense, doing its best to explain how a world of magic is able to function. This of course does lead to the atypical response of “It’s magic, I don’t need to explain anything” which is a common excuse in fantasy and The Book of Unwritten Tales plays it up flawlessly. 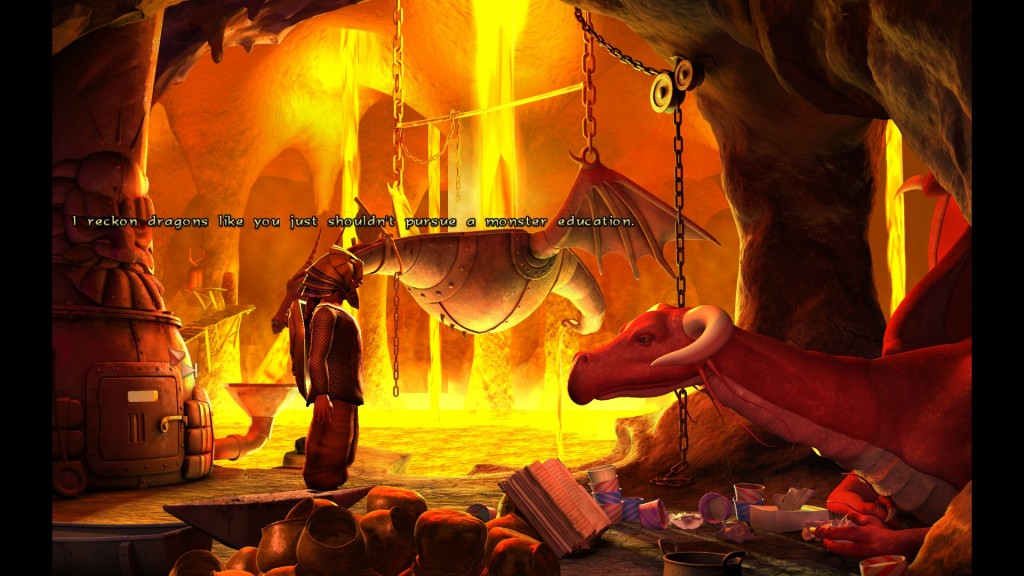 Along the way you will meet a variety of comical characters on your journey that one may find parallels in other works of fiction. From an auspicious Zorro-esque rat, to Rincewind, the famed failed wizard of Terry Pratchett’s Discworld series. Even Maguffin himself has certain parallels to Obi-wan Kenobi. All of the characters that you meet along the way are filled with quick-witted humour, fantastic dialogue and top-notch voice acting which really draws the player even deeper into this tale of war, and peril.

The Book of Unwritten Tales is of course an adventure game in its purest form. Of course with adventure comes puzzles, a lot of puzzles. The Book of Unwritten Tales is full of deep and challenging puzzles that are all solved using logic. Item combination and item locations within the game all make sense and the requirements to move onto the next section are laid out for you, so you will not have many moments where you will be scratching your head wondering what you need to do next. Initially players may be thrown off by the games control layout. There is no “action” and “look” button. Instead it is all done by the left mouse button. Meaning it can be very easy to overlook an important item as you view an object that seems unimportant but with subsequent viewings of the object you will find that there is an item to pick up.

The art direction in The Book of Unwritten Tales is an elegant fantasy fare. Beautiful backdrops of various exotic locations done in a nice smooth 3D art style, which is full of colour and are pleasant on the eyes giving justice to the concept art of Christoph Kucher, Sacred 2: Fallen Angel. The varying locations all seem to have their own personality, and are cleverly designed. While many give the impression of looking large with a lot of character, in actuality they are rather simple and easy to navigate. The character designs themselves follow the same design style as the world that surrounds them. Smoothly animated and fully fleshed out which makes each character look and feel like they fit and belong in the world perfectly. 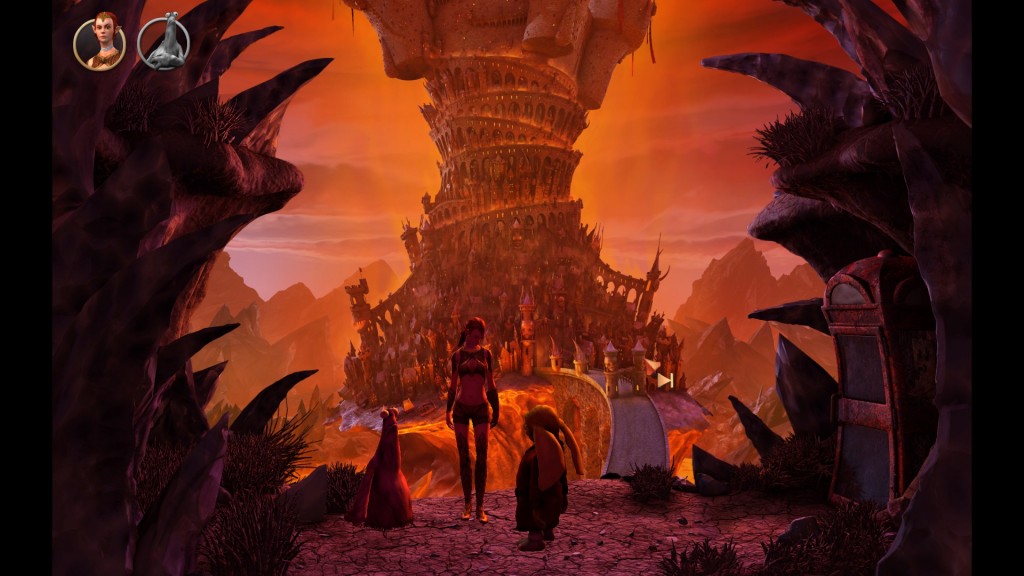 The game’s score is also worth mentioning, composed by Benny Oschmann, known for his work scoring games such as The Settlers 7 and Gladius. Capturing the high fantasy feel with beautiful orchestration which sets the tone for each area within the world perfectly, from snowcapped mountains to a dreary cemetery, the variations of the main theme, the Book of Unwritten Tales Overture which all sound unique despite being primarily based off of the same piece of music is truly a fantastic work and is easily work that can be enjoyed outside of the game. Benny Oschmann is truly one of those composers in the video game industry that deserves far more credit than he is given.

Those of you who have been craving a light-hearted adventure title amidst the sea of more serious titles that have been coming out recently The Book of Unwritten Tales is definitely the go to title. An excellent game with an absorbing story with light hearted and witty humour based perfectly on fantasy culture. Boasting a lengthy run time of around 15-20 hours with 60 unique, beautiful locations and a plethora of unique and highly amusing characters. The Book of Unwritten Tales is one of those rare gems of comedy in video games and that we are at long last getting an English translation of this German jewel is a sign that this is something truly special and is a title that should not be ignored.