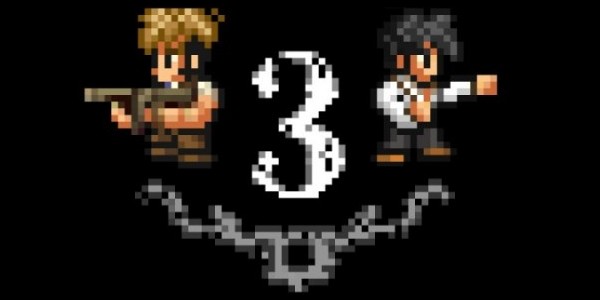 Penny Arcade Adventures: On the Rain-Slick Precipice of Darkness Episode 3 is the lastest entry in the Penny Arcade-themed video game.  At five bucks and available on many platforms, the barrier for entry is rather low.  But not everything that is cheap and easy to attain is worth the paltry sum of coins you must part with to attain it!  To that end, let’s discuss the nuances and finer points of this title, so you might be able to fully understand whether or not this is a game you’d enjoy housed in your collection.First and foremost let’s talk for a moment about the RPG elements contained within this digitally-distributed package.  For those familiar with role playing games from years past, you know that there are certain things that you can expect – an immense inventory crammed to the gills with lots of different kinds of potions and items which heal hit points, cure disease, recover magic points, etc, there are many different spells to be learned, hit points and magic points to keep topped off for each character…  It can become a rather laborious process of micromanagement from one battle to the next.  Do you use your white mage’s life spell to revive a fallen comrade, or do you use a life potion since you want your mage to be focused on healing those who are still alive? 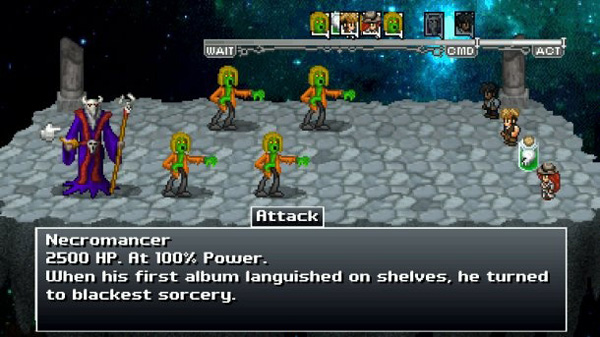 This is where I think that PAA:OTRSPODE3  shines – the micromanagement is almost non-existent.  At the end of each battle all party members are fully healed.  Your items are constant in your inventory, and you simply get one chance to use them per turn, unless you upgrade that ability by leveling up.  Magic points are earned as you progress in a battle.  You can’t hoard them for the next battle, so you might as well use them in the one that you’re in currently!  I really appreciate this nuance here, because I’m somewhat of a hoarder in video games, specifically RPGs and FPSes.  I’ll get the amazing spell or the devastating weapon, and never use either one because I want to “save it for a big fight.”  But then later on I find that I’m really just wasting great gameplay because ammo for the weapon was not as rare as I’d thought or the spell has some great effects against enemies that I’m currently playing, etc.  Having an MP system that encourages you to use all of your characters’ abilities in the present moment is a breath of fresh air for me.

Then there’s the turn-based combat – again this is fantastic and I would say that this is one of the best turn-based RPG systems that I’ve ever come across.  You have a bar at the top that shows icons for every character and enemy on the screen, which is divided up into “WAIT” “CMD” and “ACT” sections.  Each avatar slides down the bar and when any of your characters gets to the “CMD” portion you get to assign the action you’d like them to undertake at that point.  Then everything slides forward again until either one of your characters gets to the end of the bar and takes the action that you indicated, or until another one of your characters is waiting for your command.  The speed by which your characters (and the enemies) can travel down this bar can be increased or decreased by magical effects or equippable upgrades.

The other reason this is so fantastic is that you can look at and target the enemy who is next in line to attack your party.  So if my bar shows two characters of mine will attack, then one enemy, then another from my party before the last two enemies, I can focus attacks on the first enemy in the line, ensuring that their ability to attack my party is limited.  I can kill an enemy strategically before he has the ability to attack the party at all.  It lends itself to a great amount of control over the flow of the battle, and is something that I found very useful after just moments into my first few battles. 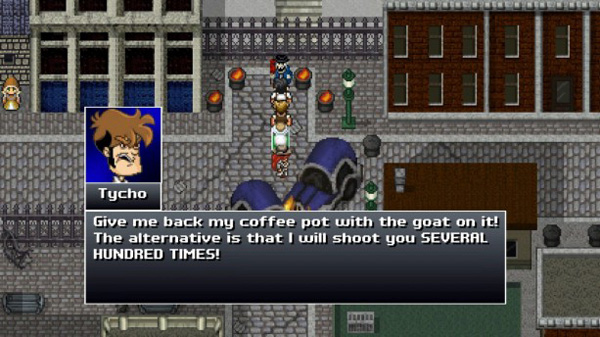 So we’ve talked some about the gameplay elements at the core of the product, but what about presentation?  Well, if you are at all a fan of older RPGs from the Super Nintendo era, this will strike quite the chord in your heart.  Moving away from the art style of the prior two episodes in this series, they went for more of a pixelated 16-bit style for things now, and in a word, it wins.  You have your typical squat characters on the “overworld map” when you are outside of a building or area, and when you go inside or enter a place where enemies roam you see the more fleshed-out characters in better detail (and about twice the height).  The colors pop, the animations simply work, and it’s just a joy to see.

From an audio perspective, all the tunes fit incredibly well with the graphical presentation.  the songs don’t feel like “chiptunes,” by which I mean they don’t sound like a new song that is trying to make itself sound older than it is.  These songs could have been composed back in the day on an SNES sound chip – the authenticity is staggering.

And the writing – Oh, the writing!  At its core you will be reading a lot of text as you go, but if you really do take the time to read what’s been written you should find yourself in stitches on a rather consistent basis.  Anyone who is familiar with Penny Arcade knows the complex and razor-sharp wordsmithing that seems to come oh-so-easy to Jerry Holkins, evidenced both in the comics themselves and the news posts that accompany them.  So it should come as no surprise to see that his influence is felt rather handily as you go through the game.  Do yourself the favor and read everything you can here. 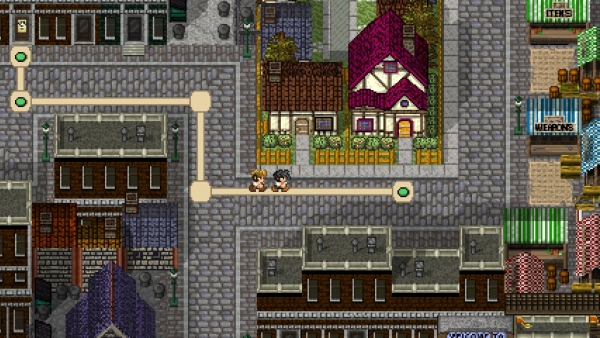 I was racking my brain, trying to find some things to complain about in this game and… well, they’re just not really there, to be honest.  This might not be a great RPG for those of you who love to delve into the details and love to experience the aforementioned micromanagement.  And for me, the game seemed a bit short but that was mostly due to the fact that I was having such a stinking great time with it.  If you completely hate role playing games I suppose this would not be a fun one for you to play.

So when we pull it all together, this game is the most-accessible RPG you can give to a person who doesn’t really “get” RPGs but is at all interested in them.  A gateway-RPG, if you will.  The writing displays a rapier wit, the graphics bring me back to the heyday of SNES RPG goodness, and the sound does the same.  You don’t have to be a Penny Arcade super-fan like me to understand things, though it does help you appreciate the little nuances and nods along the way.  Simply put, this is an incredibly fun romp and a diversion more than worthy of your time, money and energy.  Go get this game!