When Sony first showed us the Play Station Move at E3 2010 there was one demo that caught everyone’s attention: Sorcery. In this demo we saw just what the Move was capable of. It could detect a variety of motions and even angles, all of these could affect the events in the game. Needless to say I was blown away. Basically the Move seemed to offer what Nintendo’s Wii had promised me. I couldn’t wait to get my hands on Sorcery unfortunately all news went dark. The game released almost completely under my radar.

The time has come now; the game is in my hands. So what did I think? Sorcery is a game that gave me a very Legend of Zelda type feeling. Now this analogy can give the wrong impression at first; you are not traveling through an expansive world with lots of hidden secrets. Basically if you stapled all of the dungeons in a Legend of Zelda game together that would cover Sorcery’s campaign. The game is linear but not in a bad way, it progresses you steadily through linear levels on a set path but it never seems to get repetitive or boring.

Helping to guide you along is Sorcery’s predictable and at times generic story. In a word the story is: simple. Shakespeare this is not my dear readers, but a game like this reminds me that it does not have to be.  I’ve drawn many comparisons to The Legend of Zelda in this review but really that’s the vibe I am left with. We begin as a brash young apprentice who will eventually be thrust into events so much bigger then himself. This apprentice will quest to become strong to defeat a great evil and defend/rescue a princess. So yes you’ve done this a million times but in this game it just feels right. 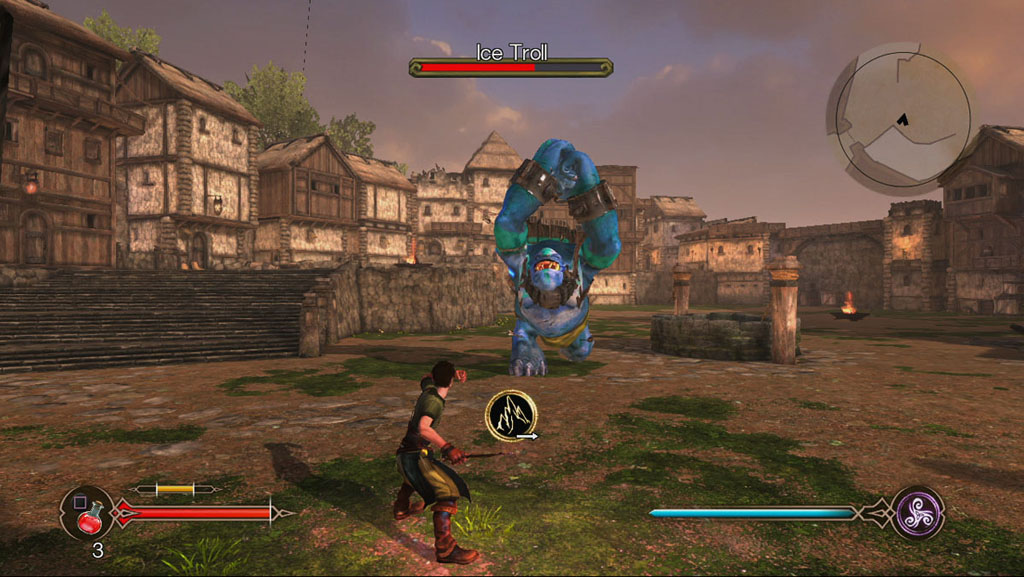 Sorcery’s art style is very, stylized it does a good job at making colours feel vibrant. This helps breathe some life into the world. It also does at good job at hiding the slightly out of date character models. Enemies however, are very generic and are often just rescaled or palate swapped enemies you’ve fought previously. There are a few exceptions but overall it’s the area I found most lacking and at times jarring. Thankfully the sound effects and score in the game are top notch. The score gives you an epic and powerful feeling as you sling spells. If you accompany this with spells that have a unique sound and feel, then you really get sucked into being a sorcerer. Voice acting is passable I have no real complaints but at the same time there isn’t a single character who’s voice work stands out.

Finally how does the game play? This is by far the games biggest strength. Using the very accurate technology of the Playstation Move, Sorcery can read a variety of motions. At times you are expected to lift the controller far above your head to hit elevated enemies. Well all spells can be fired straight where you are aiming with a flick of your wrist there is a subtlety to learning your spells. Using whips to either side you can send arcane bolt flying to hit an enemy just off screen or draw a line of fire preventing an enemy’s advance. When things get hectic you dodge roll out of the way, pressing a single button to pull out a healing potion. You then shake the controller franticly and tip it towards your mouth to heal. Sorcery has many different layers to it’s combat making it easy to learn and difficult to master.

One of the best things I can say about Sorcery is the way it makes you think. The first time I accidentally created a fire tornado I was left smiling sadistically.  When I fired an arcane bolt into this same tornado it started to spit fireballs at the enemies not confined within said tornado. It’s that level of tactical thinking and on the fly improvisation which makes the combat so very satisfying. With this great praise comes an annoying complaint I found the motions to switch spells very unclear at times. To change spells you would hold the move button and perform the corresponding motion. This is hard to get used to but once you have the hang of it, you realize how much more deadly and tactical you can be. The problem being, the motion to switch to some spells (I’m looking at you wind) can be incredibly unclear causing confusion and annoyance. This is a very small complaint but one that must be noted none the less.

Sorcery also features and alchemy system it allows you to create potions with a fun Move based crafting mini game. These potions provide stat bonuses; it’s the equivalent to the games leveling system. Unfortunately it’s not very well explained I was not able to determine if the effects were only temporary or permanent. There was no character sheet to keep track of stat increases so I felt like this system was very unfinished.

Excluding the aforementioned crafting system it’s clear that Sorcery is a very well put together game. On a technical and game play level it stands tall. Challenging and rewarding combat, decent art style and a game that is just 100% fun. My only major complaint is the game is relatively short clocking in at about seven hours. If you own a Playstation Move then this one is a must own. If you don’t own a Move yet, then keep an eye out for Playstation Move and Sorcery bundles.

This game really was surprising it showcases what the move is capable of better then I expected and provides an enjoyable gaming experience. Until next time dear readers, I’m going to burn another Frost Troll to death.[youtube id=”p8_foiopAl0″ width=”600″ height=”350″]