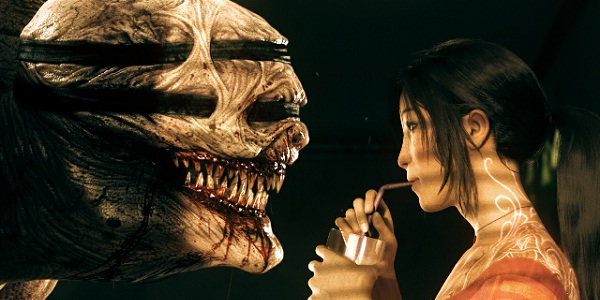 The Secret World is currently doing closed beta weekends, and somehow I got invited. Actually, the email doesn’t even say what I did to get sent a code, but hey, here we are.

What follows is my liveblog of what I did this afternoon.

WARNING! IT CONTAINS MINOR SPOILERS. That’s the only time I’m telling you. But I guess if I had to warn you about that, there are probably a lot of words you’ve already passed that probably gave you trouble…

Anyway, as they say when they’re moving on with the show, ON WITH THE SHOW!

00:00 – I chose Templar. Someone’s gotta kill the bad guys with a straight face. Actually, it’s more that neither of the other two factions interest me, and when playing games I am usually drawn to the ‘militant quasi-religious’ crowd.

00:03 – Character creation. Not a robust set of options. Skin tone selection is… uh… “interesting.” You can be white, Asian, or tan-white. Apparently black people do not fight the forces of hell.

00:05 – Character created. Grey suit jacket, grey suit pants, black dress shoes, black t-shirt, black short ponytail, black short beard. I look like an 80’s action movie villain. (He’s white.) Since they say the game is classes and you can mix and match the skills you want, I’m imagining him as a slick moneyed mobster type with a big gun and support magic.

00:06 – Cinematic. News on TV says Japanese government is hiding something. And apparently some of my stuff might be magic.

00:13 – Cinematic over, controlling character. Since I’m a Templar, I start in London. Looks enough like London, or at least [generic British city block]. No mouse sensitivity adjustment? Wow, that’s bush league, Funcom (either not having it, or hiding like an Easter egg).

00:18 – Nicely orchestrated cutscenes, very much like a single player game, moreso than SWTOR.

00:32 – Finished tutorial mission that starts right after a cutscene in a park. The tutorial is a sort of flashback/vision, where you are playing as a different character in the past, fighting in a subway during whatever crazy thing the news was talking about happening in Japan.

00:33 – On my way to Templar HQ, overheard two separate NPC’s deliver the exact same line. At least they didn’t take arrows to knees…

00:35 – Meeting with the leader (or whatever) of the Templars. He’s black, so apparently black people DO fight evil, you just can’t be one. He delivers a Dan Brown diss. I approve. The joke works especially well given the overly grandiose office you’re standing in.

00:41 – ‘The Crucible’ is the training area of the Templars. You can try out all 9 different “weapons.” Also, you get to try them on chained-up Rakshasa, which are the monsters like in their first teaser years ago, with the girl making a milkshake in her apartment, and then turning around and seeing a crazy demon. That girl is also in the flashback tutorial. There’s a tooltip that even says “remember her?” I get that these guys are horrible demons, and would very quickly rip all my tenderbits to pieces if given any kind of chance, but there was something just… chilling… about the gleefulness of your instructor about using chained-up things as target practice.

00:46 – The game client has a built-in browser, and as you try out your weapon, there a popup video explaining how combat abilities. You get to choose 7 active and 7 passive skills in a ‘build,’ which you can switch between. Active skills are things you click buttons for, like damaging attacks or heals, while passive skills adjust your overall attributes or specific active skills.

00:56 – Turns out, the assault rifle specialty alone does exactly what I was planning on doing, combining damage with healing magic. Huh. The different weapon specialties have pairs, Assault Rifle (damage/heal), hammer (damage/survivability), Elemental Magic (damage/support). It seems like it’s not as free-form as they said because unless there’s an extremely generous respec system, picking one weapon and sticking all your points into it is going to give you the biggest advantage.

00:58 – Being sent out into the world. A world that isn’t very good at keeping secrets, apparently.

01:00 – So the giant glowy thing in public is the magic transportation? “Secret” means something else to these people, doesn’t it.

01:02 – Hub World/Agartha/Hollow Earth is kinda pretty and a neat concept. Essentially a magic train station that has winding branches that allows you to go to different zones around the world. Going to Kingsmouth, which is, I’m guessing, Innsmouth with a King instead. (Trust me, the Lovecraft references don’t stop.

01:15 – Fighting your way to the town of Kingsmouth from the portal is standard MMO “kill these monsters” quest chain. You meet a guy who tells you how horrible things are, and that on the way to town you should kill zombies. Lucky him, zombie killing is just what I love most in this world.

01:23 – Semi-active “defend the town” quest, nothing extraordinary. “OH NO, HERE COME A BUNCH OF ZOMBIES!”

01:32 – Lots of basic MMO task-running. Nice to see they put a lot of quality work in the architecture and layout of the levels, but the game design was old 6 years ago.

01:33 – Interesting mission selection system. Six max missions, one of each of the three named types allowed (dungeon, investigation, main), and then three ‘side quests.’

01:58 – A lot of standard MMO stuff, really. Running around to marked quest spots, killing monsters along the way, getting a bit of loot, selecting quest rewards… There are a lot of nice unique touches, but all of those touches are on things so otherwise banal that it’s hard to care.

In all, I wasn’t necessarily planning on picking this game up, and nothing about what I played today changes that. Mechanically, there are some things I actively like. It uses a dual-targeting system like in Warhammer, in which you have an offensive and a defensive target. As someone who usually plays support/healers in MMO’s, I appreciate the design space this opens up. The interface could use some tweaking but is overall fairly attractive, though there are certainly a LOT of things the game is trying to show you at once. Minimalist, this ain’t.

I’m a huge fan of the foundations of the story, with its mix of Lovecraft, World of Darkness, Stephen King. And Buffy. And probably a whole lot more. If it’s urban fantasy and been done in the last 20 years, it probably gets referenced in this game. I just wish they hadn’t put all that stuff on a game that only might have felt innovative in 2003.