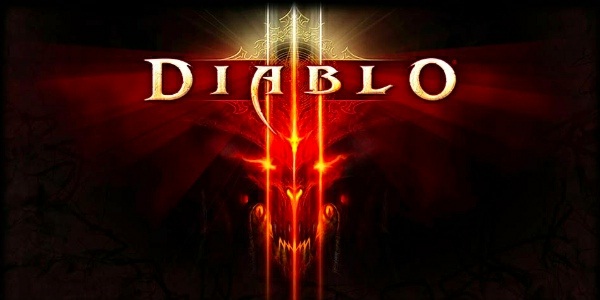 It has been over a decade since heroes have been summoned to Tristram’s aid. A ‘fallen star’ of unknown original has poked a rather large hole in the old, ruined cathedral in the hills above the town. As one of five adventurers, you must investigate the catastrophe and begin a journey that will have you battling for the fate of Heaven itself.

Deckard Cain needs us to stay a while. Should we listen?

Diablo III‘s fundamental gameplay is very nearly identical to when the series first launched in the mid-90’s. Murder monsters, collect their treasure, find more monsters. Lather (their faces with your maces), rinse (their blood off your clothes), repeat.

Despite this repetition, the experience as a whole can be highly satisfying. With a mix of randomly generated and pre-crafted dungeons and monsters, many of the foes you face can provide an interesting challenge depending on what characteristics they roll up on their table, D&D style. A champion group which has the features ‘Extra Health’ and ‘Vampirism’ can keep you tangled up for a long time due to their absurdly high (and regenerating) health pools, while one with ‘Jailer’ and ‘Defiler’ can lock you in place on a spot of ground that is doing continuous damage to you. This random generation really only provides a benefit regarding the monsters you fight, as I don’t think that the dungeons that are generated deliver that much excitement. The dungeon as a functional object doesn’t really change that much due to different layouts, as “clicking this direction” as opposed to “clicking THAT direction” is not much of an effective variance.

A significant difference between Diablo II and III is the skill system. In II, each class had a set of three talent trees which contained multiple skills, spells, and passive abilities in which you could place the points you received from gaining levels. This system returned in Blizzard’s World of Warcraft, and, just like in that game, has been removed in Diablo III in favor of simpler, more straightforward choices. Diablo III’s skill system revolves around unlocking abilities at specific levels, and unlocking further customization inside each ability using ‘runes,’ upgrades that modify the values or behaviors of the skill they are sorted under. By level 19, every character has access to the maximum six available skill slots, though you can swap out abilities at will, incurring only a short cooldown before they can be used. This free ‘respec’ system allows players to experiment with different builds, or have different builds available depending on the multiplayer group composition or the current enemy needing killed.

The difficulty ramp is rather generous, if not humorously so. In your first playthrough of Act 1, there will likely be very few, if any, times that you 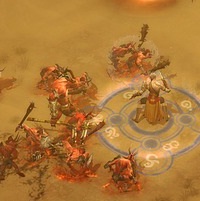 feel truly threatened. Health replenishment is ample, and enemies are not found in overwhelming numbers save for a couple scripted events. In Act 2, you will begin to see that positioning can be important, and that you might want to start dodging things that can do large amounts of damage to stationary victims. Act 3, though, is where the  real challenge starts. I never died, nor truly feared dying, until halfway through Act 3 when I walked through a door and was met with six or seven exploding gas demons. Usually, these flatulent little guys are encounter singly or in pairs. A group of them can (and did) take a barbarian’s health from full to empty in the blink of an eye. With few exceptions, though, I would say that my deaths have been due to “I could have done that better” more than blatant unfairness, which I feel is a pretty good sign considering how much behind the scenes dice rolling happens.

Only after you defeat Diablo himself (16-20 hours seems to be the average for the first playthrough) do you unlock the second difficulty setting, Nightmare. Slaying him a second time unlocks Hell, and the third round gives you Inferno. The increased difficulty is only unlocked for the specific character you completed the game with, essentially creating a ‘new game plus’ loop in order to reach the game’s ultimate challenge. By the time you get to Inferno you will know your character better than the back of anyone’s hand, but the grind to do so could easily become discouraging as increased difficulty doesn’t really add any more texture to your adventure (you’ll see all the same monsters who have all the same abilities), it just makes all the damage numbers you’re dealing with bigger.

The implementation of Diablo III‘s online functionality has been hotly debated for months, so I’m not going to spend very much time on it except as to how it leads to the discussion of multiplayer. What I will say, though, is that the ‘always online’ aspect to the game isn’t as bad as a few very loud people are saying, and seems to mostly be tangled up in people’s preconceived conclusions regarding DRM and piracy. This is a completely separate discussion. But there is an important aspect to that discussion that is relevant to Diablo III, but one that I have yet to see anyone suggest:

I believe that Diablo III is not a single player game.

Well, not in the strictest sense. 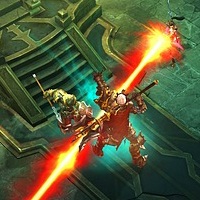 Discussions about the online requirement general go no further than “it’s stupid to make me have to be online for a single player game.” And that statement is certainly true, but perhaps not accurate in the immediate sense. The Diablo series has always been considered a generally single player game in which you can go out and play with your friends if you choose. Remember, though, that this design paradigm was alive in a time of much lower technical capabilities and a significantly different gaming culture. In the intervening years, what I suspect that Blizzard has done (without telling anyone) is turned Diablo into a quasi-MMO, or a mulitplayer game in which you can play alone if you choose.

Nearly everything about the design of the different classes signifies to me that players were meant to be used as interchangeable puzzle pieces, not stand-alone powerhouses. The crowd control, group buffs, AoE damage and effects (and more) on the character side, and the intuitively convenient multiplayer quest-based matchmaking and client-side loot system (all the loot you see drop is for you only, not everyone, so no one is able to ‘ninja’ anything you see drop) lead me to believe that Diablo III was intended, from the bottom of its foundation, to be played cooperatively.

Blizzard’s three current properties, Diablo, Starcraft, and Warcraft, all have stories that end up with roughly the same verdict: safe. The narratives are not often actively bad, but very rarely do they venture outside the tried-and-true. “A big bad thing is trying to destroy everything, we have to stop it!” This problem is actually quite common in all of literature, and is the cause of many of the cases of the antagonist being more interesting than the protagonist; the antagonist does things. The antagonist is the one who sets the story in motion, and the protagonist is the one whose task it is to react, to restore stasis (or as much as possible) to the world.

Aside from the delectable cinematics (but aren’t they always?), the game’s story is of little concern. If you choose to pay attention to it, instead of just clicking through all the flat dialogue, you’ll find a tale that has a great deal of content, but not much in the way of flavor. Character motivations are all found on a continuum with only three points: Don’t Die, Kill, Make Money. Adversity and betrayal comes from exactly the places you expect them to, and hope as well. At no point do you get the feeling that this world exists for any purpose other than to be saved from certain doom every couple of decades.

This game looks good in just about every way that counts. The world itself looks incredible, with more detail than one would expect from a game whose camera angle is straight out of 1996. A great touch is the forced perspective vistas when you are at the edge of a navigable area and can see dozens, sometimes hundreds, of feet below.

The spell effects are generally bright and eye-catching technically, with the Witch Doctor’s bizarre arsenal being particularly creative. Playing as a barbarian has given me plenty of instances of flying body parts from a particularly aggressive blow from my two-handed mace, or a small minion being reduced to a spray of blood on the ground.

I ran into a few minor instances of framerate drop due to a high number of enemies on screen, but for the majority of the time everything moved at a brisk pace.

Diablo III scratches an itch. For some reason, its simple game mechanics breed dozens of missing hours for millions of players worldwide. Chances are, you’ve already decided whether you’re going to acquire this murder spree or not, and that’s perfectly fine. In mid-June, the Starter Edition of Diablo III is going to be open to the public (the same content that was in the beta, and currently available only through a redemption code packaged with the game), and I would urge you to try it out for yourself.