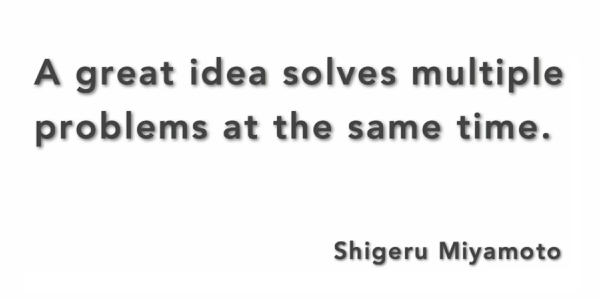 A Great Idea Solves Multiple Problems at the Same Time

This quote from Shigeru Miyamoto describes the Wii U GamePad, says Satoru Iwata. This is what describes the now named Wii U GamePad. Nintendo is stepping into the social networking scene with a leap by combining message boards and a console called the Miiverse.

With the Wii U main screen, you see icons floating in the air for various Nintendo characters. Mario, Yoshi, Boo and even a Trifore. Underneath are dozens of Miis, gathering together representing not only your friends, but some of the more popular games that neither you nor your friends have played, the Miiverse. This is a great way of making other people curious of games they may not normally be interested in or it could be an opportunity for Nintendo to advertise this space. I can’t wait to see how many people are playing Jett Tailfin.

Mario Bros. The Forum The Game

Displaying what could be footage of a launch title Mario game the level selection map and kill screen have message displayed from different users. While mentioning that this is a possibility for games, I should hope that the comments will be heavily moderated. What some would consider a family console, little Jimmy will be learning some new four letter words at a tough boss fight. You will be able to pause the game and ask OctoG123 or any other user for help during the game, if you need to or not.

The Miiverse can be accessed through the 3DS, Wii U and mobile devices. Will it now only be a matter of time before you can play “Miiverse games” on your mobile device like Xbox Live games?

I Kind of have a Tablet

Nintendo displayed their internet browser, saying that it will display on both the tablet and your television screen. They added an option to drape a curtain across the so you can prepare showing off a picture, getting ready to watch a movie or hiding that dating sim you’re playing. It seems that you still need to be within that area of the console, they did not mention being able to use the GamePad outside of your home. Although they did say you can use the controller without the console on. It would be great if they allowed using this while on the go. This could be a serious competitor to the iPad and PlayStation Vita.

The new control design replaces the former thumb discs with thumb stick that also act as a button. What is more exciting is the reveal of the Wii U Pro, a black controller which is could be described as a Xbox 360 controller about the four face buttons on the right side of the controller. I can’t wait to get my hands on this to play some of the amazing first party Nintendo games.

Iwata said the reasoning for the name GamePad is a throwback to the original Nintendo Entertainment System’s controller which was dubbed the game name by fans when it first came out. So they felt it fitting for the controller of this console release.

Showing features from the reveal last year, playing a golf game with the controller on the floor to sense your swing, changing the game to the GamePad display instantly and the touch screen the send your friends hand written messages and selecting a button in the menu. A lot of this footage was a repeat from the reveal of the console. They couldn’t be bothered to show new footage.

The Wii U looks to be off to a great start and just makes the wait for the June 5th conference all the more difficult to wait for. Nintendo claims to have learned from the 3DS launch and plan on bringing us some big games for the release rumored to be this fall. Stay tuned to the site for you E3 news.