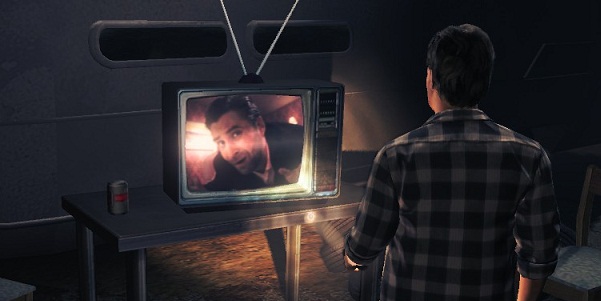 This week, on Night Springs….

Now available on PC, Alan Wake’s American Nightmare, a quasi-sequel to Remedy Entertainment’s 2010 third-person adventure Alan Wake, is so concerned with name-dropping and referencing its predecessor that it never really finds a strong voice of its own. While this game is not true DLC for the original, neither the premise, the dialogue, nor the combat will make sense to those who have not completed Alan’s initial story. Nor, I suspect, would they care. 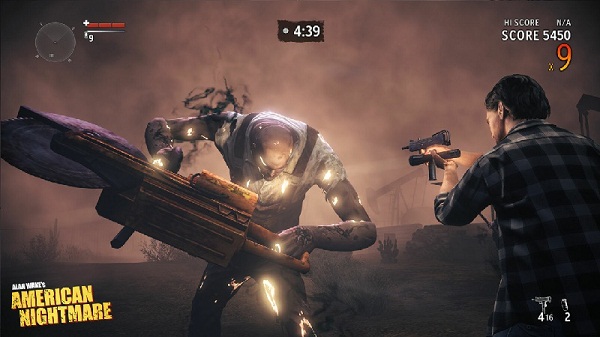 American Nightmare opens with Alan regaining consciousness outside of the town of Night Springs, Arizona. Night Springs is the setting for the fictional (as one normally judges fiction, though in this game series it’s a very tough call) television show called Night Springs, which Alan happens to be a writer for. The show is a heavy-handed homage to the classic Twilight Zone episodes, complete with a host doing his best Rod Serling impression. Night Springs episodes appear in the original Alan Wake as short vignettes that can be watched on televisions scattered around the game.

What follows is Alan’s attempt to defeat his evil doppelganger named Mr. Scratch, who, through most of the game seems to be essentially a combination of Poe’s William Wilson and Tyler Durden, even giving a similar “I am all the things you want to be” speech. American Nightmare ups the ante on Wake‘s original cacophony of causality by tossing in there mere trifle of an infinite time loop into the “everything I write becomes real” theme. Mr. Scratch has trapped Alan in this endless loop, though any true motive other than “just to be a jerk” is unclear.

Unfortunately, I feel like this was probably the wrong Twilight Zone fruit to pluck. Essentially, you play through the narrative three times. Each time, your adventure becomes slightly easier, though I couldn’t help but feel Mr. Scratch’s mean-spirited sneer was intended for me as much as it was for Alan. By the end of the four hour campaign I was as tired of retreading my steps as Alan was, and my satisfaction of completing the game came more from relief at not having to do that anymore than it was in having saved the day.

This repetition is only mitigated by the fact that American Nightmare‘s core mechanics are solid, though not groundbreaking. The game controls just fine on the PC, and I felt no undue awkwardness translating my experience from playing the original on the 360. Movement and aiming were both very smooth, though I sometimes ran into some awkwardness after executing a dodge during combat, and having the camera try to auto-correct itself, or perhaps predict where it thought I wanted to be looking, and would end up facing a wall or having my vision obscured by a tree or bush causing me to not see the subsequent deadly blows coming my way.

Of particular creative note is Alan’s character model/actor Ilkka Villi (with the voice of Matthew Porretta) portraying Mr. Scratch in the few inter-loop cutscenes and on the watchable television screens in the game world. He plays the gleeful psychopath quite well, and found each of his performances in the game to be perfect for the kind of devilish characterization he was meant to convey.

(I hope you get that joke.)

One of his brief television scenes has him doing his own interpretation of Michael Madsen’s “I’m a murderer in a suit, and I have a knife, and I’m going to kill you with it” dance from Reservoir Dogs. He has a different song for it. I suspect they wouldn’t have wanted to spend money on the original. All of the other scenes involve him either brutally murdering someone (though no gore is shown), or joyfully taunting Alan, or doing both at the same time.

A new addition to the Wakeaverse (Can I do that? No? Ok.) is the Arcade mode. This is a score-attack scenario, in which you are placed in a small enclosed map and must survive until dawn (or until you, y’know, die), getting as many points as you can. There is a point multiplier mechanic that goes up as you defeat waves enemies, but degrades slowly over time and resets to zero if you take damage. You must ration out the ammo supplies scattered around the map, as well as the ever-precious health regenerating streetlights.

While the Arcade mode is essentially inoffensive, it isn’t really that captivating, either. I have a suspicion that it was included to catch the eye of a more action-oriented type of gamer who make have shrugged off Alan Wake due to its heavier focus on story, but if that is the case I’m not sure that the game’s combat mechanics are robust enough to satisfy that type of gamer. 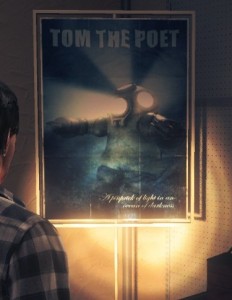 In all, Alan Wake’s American Nightmare compared to Alan Wake plays out much like watching a random episode of the Twilight Zone after Hitchcock’s Psycho; there may be effectively creepy or interesting moments, but the abbreviated length takes the focus away from full and effective development and puts it in the hands of just a few scenes.

If you truly enjoyed Alan Wake, American Nightmare is worth your time. If you did not enjoy it, or if you didn’t play it yet, then this one is not for you.

POST-SCRIPT – I’m not sure yet what this means, and I couldn’t figure out how to work this into the review (mostly because I’m not sure yet what this means), but I think it might be important that the only characters Alan interacts with, aside from his evil twin and the monsters trying to kill him, are three attractive women. There is one each in the three locations in the story. Two of them are doing what would stereotypically be considered a ‘man’s job,’ and the other has been compromised by the enemy (as it were). It may take me a while to unpack this…