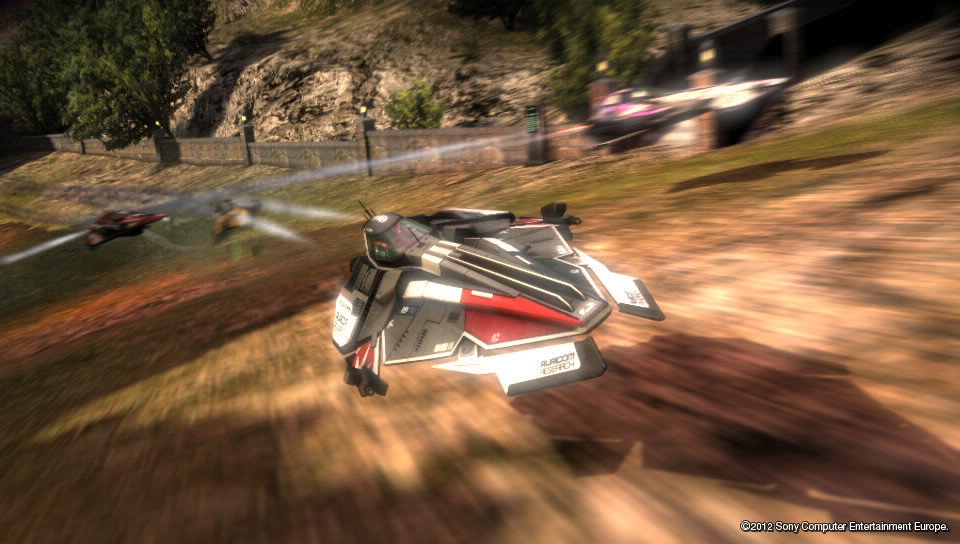 The launch of a brand new PlayStation platform and the WipeOut franchise almost go hand in hand. When the original PlayStation Portable launched in 2005 with the phenomenal WipeOut Pure followed by 2009s WipeOut Pulse. Even the PlayStation 3 got in on the action with 2008’s WipeOut HD. Does WipeOut’s formula of futuristic racing machines, hard hitting weapons and breakneck speed equal fun on Sony’s latest handheld?

WipeOut 2048 like its predecessors brings the entire package to Sony’s new handheld. Just because the game is being placed on a Vita Game Card doesn’t mean that SCE LiverPool had to compromise any of its artistic vision. Those of you looking for a faced paced racer are in for a treat with 2048, as the game offers several different game modes including offensive/defensive only events, time trials, four different classes of ships (D through A) and four distinct seaons (one per class).

Races in WipeOut 2048 feel fast paced, organic and most importantly competitive. Whether you’re participating in standard races or ones with restrictions, special rule-sets that restrict what offensive & defenses abilities are available, or standard races no two feel the same – this is true even repeating an event. As you race down one of WipeOut 2048’s many different tracks there are several skills you will have to master if you are looking to be successful in the later seasons. One of the most essential skills in WipeOut is the timing of drifting and the use of the airbrake. Drifting around corners to avoid obstacles and sharp turns is part of the winning formula in the anti-gravity league. Hitting a snag that costs your even a second or two could mean the difference between a first and third place finish. As you race against other anti-grav vehicles (whether computer controlled or online) there is a sense of imitate urgency and competition that springs from ships crashing in to each other or firing off rounds as everyone tries to lead the pack.

The weapons in combat orientated racers like WipeOut can range from the comical, with games like Mario Kart featuring oversized turtle shells, or gritty like Twisted Metal‘s grungy chainguns and missiles. 2048 mixes things up a bit on the weapons department by not only offering several different weapons but also two distinct types of power-ups. On the offensive side of things you’ve got your standard missiles, homing rockets and chainguns but there are also several near future weapons thrown into the mix including an earthquake generator and a plasma cannon. Maybe I am just a more offensive player but I only found a few of the defensive weapons to useful, namely the mines when your are at the head of the pack and the autopilot power-up can navigate you through some tough spots if you are in the middle of the pack. In the end the wide range of power-ups should suit the many kinds of players who are bound to pickup 2048. 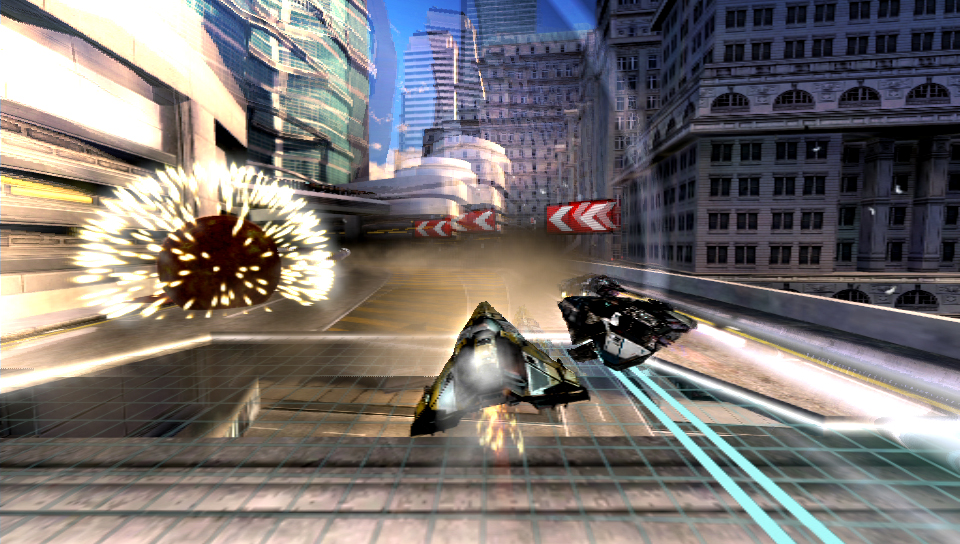 On the graphics front everything runs a blistering pace in 2048. The world will seem to melt around you as the anti-gravity ships travel along the course and hundreds of miles per hour, it’s actually almost hypnotic in some moments. The ships themselves all carry their own personality in both presentation and function. Not only does each ship have its own unique set of available power-ups (with a short excluded power-ups being shown at selection) but each one has a unique design and structure.

While the ships themselves are highly detailed SCE Liverpool obviously had to cut some corners in order to get everything running at a lightning fast pace, some ground textures and the crowds in the stands don’t really hold up to scrutiny, although to be fair if you are looking for graphical imperfections then you are probably in last place. To their credit each course is certainly unique, you will race through futuristic cities, muddy brown outdoor environments and concrete jungles without ever feeling like the courses are repeating themselves. This might be one of the few cases where motion blur and ambient lighting really make the difference when it comes to a game looking average and it looking great on the small screen.

A near future that features hovering death races and plasma cannons goes hand in hand with a techno soundtrack. SCE London chose to revisit some of the classic tunes that have appeared in previous WipeOut games while including more modern tracks from artists like P.E.T.R.O.L and The Chemical Brothers. If you are a fan of Techno/Electronica you’ll feel right at home bobbing your head along with Wipeout’s soundtrack. On the sound effect front weapons utilize a unique set of explosions and sci-fi inspired sounds. The weapon sound effects might not stand out but they more than suit the overall atmosphere that 2048 creates. Gone from the previous portable WipeOut titles is the female announcer, replaced with a male announcer who sounds like he was processed through autotune. Like the weapon effects, this fits the bill and you barely hear him (only when picking up a power-up or finishing an event) but his presence is hardly unique. 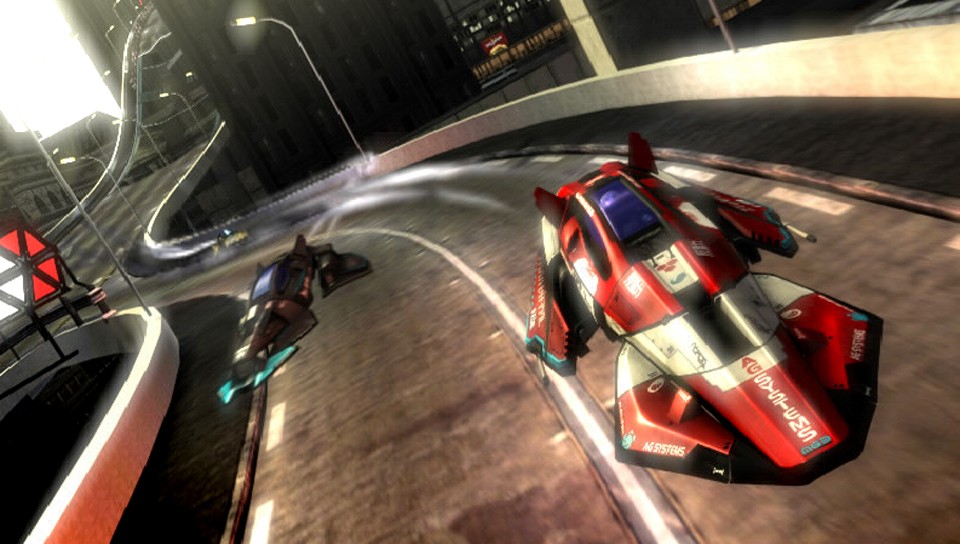 Accenting WipeOut 2048’s 30+ event single player campaign is a suite of online modes and cross-play, the ability to play certain tracks between the PS3’s WipeOut HD and 2048 on the Vita. In theory this feature sounds pretty sweet, who wouldn’t want to play their friends on their shiny new Vita? In reality however there are a few hick-ups with the cross-play feature. The first being the selection of course between the two games is not very large and both devices require a connection to the PlayStation Network in order for this functionality to even work. More courses are available in the WipeOut HD Fury add-on but sadly we didn’t have access to this DLC at the time of review. Add in the fact that both the multiplayer campaign and cross-play are locked behind an online pass, which will cost you $10 if you bought the game used, and you quickly realize that would could have been a killer feature becomes a mere novelty.

WipeOut 2048 is probably the best racer available at launch for the PlayStation Vita. While, that might not be saying much considering its competition are the anemic Ridge Racer and the iphone port of Asphalt 5, 2048 does get a number of things right. The racing action offered will suck you right in if futuristic racing is your thing and the A.I in the single player offers more than a adequate challenge during the mid/late seasons. Fans of electronica/techno will eat up the soundtrack but if you’re looking for music with lyrics, you might want to place an ipod alongside your Vita. Some of the graphics do fail an up-close inspection but when you’re racing along at 500 MPH you will hardly notice. Finally, Cross-play is also a great idea but having it tied to an online pass & making an internet connection mandatory even when a PS3 console is connected to the same network kill some of the novelty. If you want to lose several hours to your PlayStation Vita WipeOut 2048 should be on your shortlist of games to buy.