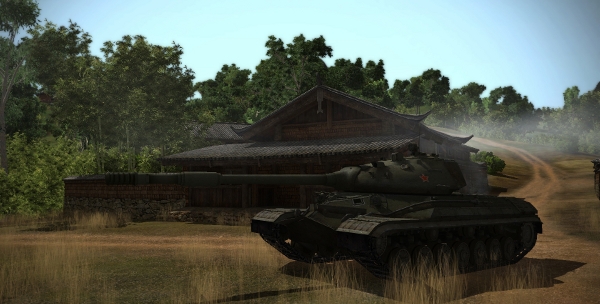 World of Tanks has just rolled out its 7.3 update. The major changes are a reshuffling of the Soviet heavy tank tier, and the addition of a new “battle arena” called the South Coast, as well as a new map called the Dragon’s Edge, which is apparently the first World of Tanks map set in Asia. Read on for more screenshots and information about the changes to Soviet Heavy tanks.I’ve never played World of Tanks but my understanding is that Tanks are organized in a manner similar to a tech tree and unlocked via the XP you receive in game. The new update redesigns this tech tree by splitting Soviet heavy tank development into two separate branches. One branch of the tree includes the ST-I, KV-4 and IS-4 tanks. The KV-3 has been moved to the other branch, which includes a brand new tank, the T-150.

I just wanted to say the Soviet tanks mentioned in this update are pretty obscure. Only a couple hundred IS-4s were produced and those were just parked in the Soviet Far East until they were decommissioned. Furthermore, the Russians never made a single prototype of the KV-4, and only one KV-3 ever saw combat (and the Germans destroyed that). The ST-I must be extremely obscure; I’ve never heard of it. As for the new tank, the T-150, it was apparently a prototype for the KV-3, and the game model certainly looks like that.

Now for the pictures….

This is the overhead view of the Dragon’s Edge.

Does Dragon’s Edge look sufficiently “Asian” to you? Perhaps it needs more rice paddies and pagodas.