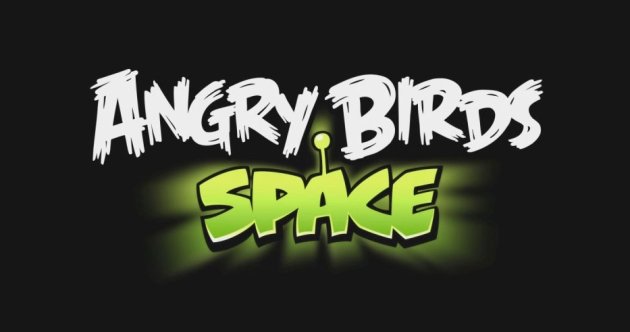 The original Angry Birds has ruled both the iOS and Android digital shops for the past few years. Both versions have been downloaded over 700 million times and the game has spawned two spin-off titles, Angry Birds Rio and the constantly updated Angry Birds Seasons. Rovio mobile is back with a full-fledged sequel to the original. Can the birds boldly go where no avian has gone before?

At its core the Angry Birds franchise has always been about solving physics puzzles and Space is no different in this regard. Using their finger the player loads a bird onto a slingshot and charts a trajectory for the bird. The resulting impact will cause in-game objects like wood planks, concrete etc in order to defeat the bird’s enemy — the green pigs. In this respect Angry Bird’s Space has not changed but the spectacle of falling blocks of concrete destroying swine can bring great pleasure.

There are several new mechanics on display in Angry Birds Space that help provide a refreshing take on the existing formula. One of the most obvious from the get-go is the inclusion of zero gravity physics and gravity wells. Obstacles like meteorites and space debris float in the environments and can be used as projectiles against the pigs if you strike them in the right place. Gravity wells can be used to sling shot your Angry Bird around a planet for extra speed, or along a set path of multiple wells to help you achieve a high score.

These additions add an extra dimension of puzzle solving to a game that at times that can seem random. Later levels will provide a genuine challenge to even the most experienced Angy Birds player when attempting to obtain the higher star ratings. Some of the puzzles can be solved within seconds while others had me scratching my head while chasing the high score. Once a plan of attack to a particular puzzle has been devised it can be a little frustrating to see it to fruition at times. There can be times where you’ll attempt a solution and have it fail the first four times only to have it succeed on the fifth attempt. In these situations simple user error may be to blame but due to the game’s nature it is really hard to say.

Gameplay mechanics aren’t the only thing to evolve in Space. The Angry Birds themselves take on various super hero personas. Each of those flying avians have their own unique powers – the Red bird has increased speed, the Purple bird can be flung at specific point in space after launch and the Blue bird can split into a barrage of three smaller birds at any time with a tap of the screen for example.  These super powers are introduced gradually and by the games later levels you may want to find interesting ways to combine them together. For example: in one memorable stage I had to use the charging purple bird to position asteroids so that I could use the blue bird (split into multiples after launch) to kill multiple targets at once. 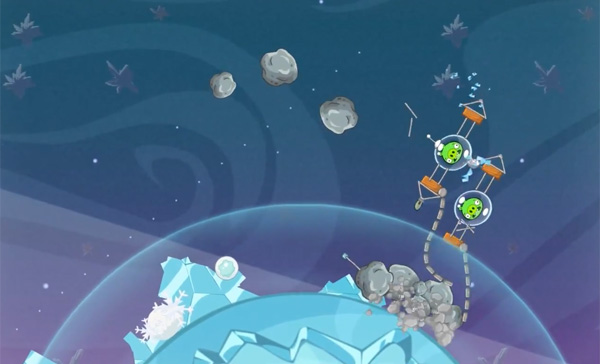 Angry Birds certainly has a unique art style and Space continues what the original established while craving its own niche. The bright blue skies and green pastures of the previous game have been replaced with the blacks, purples and greys of space.  This color scheme really works well as the on screen characters (namely the birds and the pigs) all have their own unique patterns that look splendid against the space backdrops. Everything is very well organized and easy to read at a glance. The visual design in Angry Birds Space walks the line between cleanliness and artistic vision wonderfully.

In the end Angry Birds Space is a fantastic mobile title that will keep you entertained for hours. The new gameplay elements introduced here really help to revitalize interest in a franchise that is going on 4 years strong. There is still a degree of randomness to some of the levels and that may be a problem for gamers looking for a straight up physics puzzler, sometimes a solution you think will work just wont and other times random luck will determine your score. Given the fact that Angry Birds Space is $0.99 it obviously comes as a definite purchase but it is best enjoyed as a title played on short bus rides rather than in 3 to 4 hour blocks.