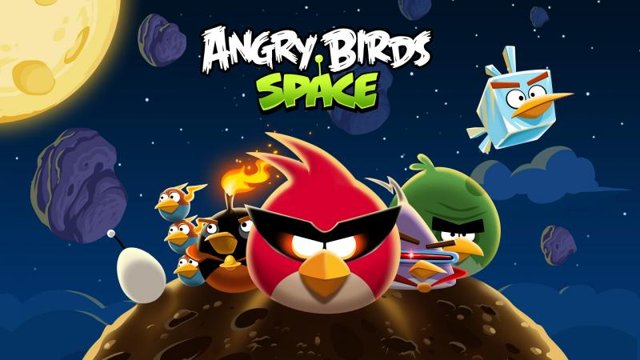 Angry Birds space finally descended from orbit to land safely in retail shops in the United Kingdom this weekend. Publisher Focus Multimedia released Rovio Entertainment’s latest bird flinging simulator as a packaged product. For just 10 pounds you too can secure a boxed copy of Angry Birds Space and help destroy those nasty pigs.

The mobile version of Angry Birds Space launched on iOS and Android for $0.99 and free respectively early last month. The game features over sixty levels with the promise of more to come and new mechanics like gravity wells and asteroids.

Check out the full press release after the jump.

After a giant claw kidnaps their eggs, the Angry Birds chase it into a wormhole and find themselves floating in a strange new galaxy – surrounded by space pigs! Luckily, the Angry Birds have super powers of their own…

Angry Birds Space is available on PC from www.focusmm.co.uk, all good games specialists, online stores and supermarkets across the UK, priced at £10.20 SRP.
About Rovio
Rovio is an industry-changing entertainment media company based in Finland, and the creator of the globally successful Angry Birds franchise. Angry Birds, a casual puzzle game, became an international phenomenon within a year of release, and is now the number one paid app of all time. Following this success in mobile gaming, Angry Birds has expanded rapidly in entertainment, publishing, and licensing to become a beloved international brand.

About Focus Multimedia
MCV Industry Excellence Awards 2012 Finalist and winner of the prestigious ‘Leisure Software Publisher’ PCR 2012 Award, Focus Multimedia delivers “Products that sell 52 weeks of the year” and is the UK’s market leading publisher of impulse price PC games and software. Focus creates and supplies consumer demand for entertainment through traditional and non-traditional channels across the UK and abroad.