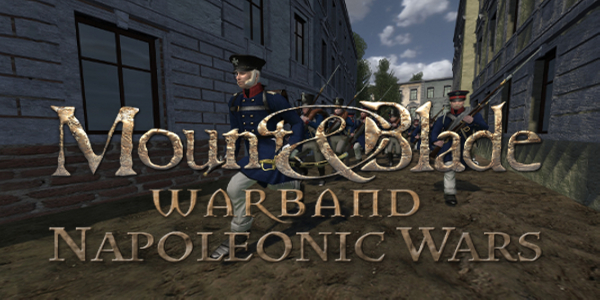 Paradox Interactive has just released a Napoleonic Wars DLC for Mount and Blade Warband. Mount & Blade Warband: Napoleonic Wars retails for $9.99. Those who pick up the DLC will get over two hundred new units to play with, including player controlled artillery, as well as massive 250 person multiplayer battles. The Napoleonic Era is probably a good choice for the series, as it’s the most modern setting that would work well with Mount and Blade’s signature mounted combat.

Unfortunately for fans of the Mount and Blade series’ open ended single player campaigns, this DLC is multiplayer only. So, you won’t be able to rampage across a map of Europe for L’empereur.  You’ll find a full list of the DLC’s features after the trailer.

Under the close supervision and support of Taleworlds, Mount & Blade Warband: Napoleonic Wars was developed by Flying Squirrel Entertainment to bring the visceral, tactical combat of Mount & Blade into a new era of warfare. The expansion features:

• Massive multiplayer battles with up to 250 players
• 5 nations with more than 220 unique units to choose from, with accurate early 19th century weapons and uniforms
• A wide range of artillery pieces ranging from field cannons to mortars, capable of firing explosive shells and rockets – all fully controllable by players
• Barricades, trenches, and explosives via the multi-purpose Engineer class
• Special musician units with drums, fifes, bagpipes or trumpets, able to play historically accurate tunes; all recorded and played by award winning musicians
• Lead squads of soldiers against each other in the new commander battle mode
• More than 40 classical background music tracks