Electronic Arts has announced  a companywide lay off from between 500-1000 people. A number that will result in having 5%-11%  of their staff back out on the job market. This lay off was originally planned to happen last Monday (4/9) but was pushed back. It has been confirmed that they are coming very soon however.

After EA’s plummeting stock prices dropping from a once lofty $61 per share has recently fallen to $16 per share. While being speculated to keep falling. This is believed to have been caused by 2011 not having as many big blockbuster hits aside from Battlefield 3,  highly underwhelming success from Star Wars: The Old Republic, and high marketing costs. Additionally The Consumerist naming the company as the “Worst Company In America” recently, may have the higher ups considering some restructuring.

Restructuring is exactly what Electronic Arts is planning on doing. According to a statement from EA corporate communications sent to Joystiq: “We make occasional adjustments to resize teams as projects are completed and new priorities established.” 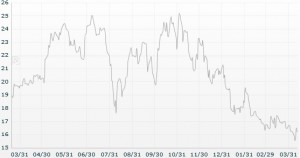 With the supposed internet restructuring we may see some big changes within EA and their priorities. For a company that has seen a profit loss for the past 5 years according to their profit shares, a bit of change can’t possibly do anymore harm. Also said in the message received from corporate, “Overall, we expect that headcount will be up at the end of this year”. What could this mean? Perhaps this layoff is only temporary to ease their expenses before the holiday season where they may announce something big. Perhaps it could just be a way to ease the pain from continued profit losses.

Overall though, things aren’t looking too good for the video game giant. We’ll have to see what happens within the coming weeks.