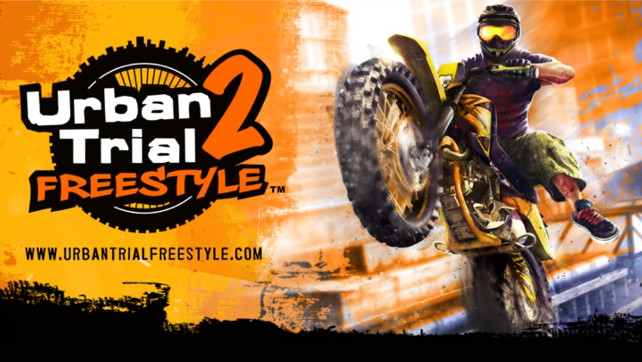 Urban Trial Freestyle 2 for the Nintendo 3DS eShop is actually a pretty fun game. The follow-up to the original released in the 3DS eShop back in 2013, this sequel feels like a solid game packed with fun gameplay and some humour along the way.

Note that these impressions are from the demo of the game, which was released alongside the full game.

The game comes with numerous new levels in five locations, one of which is available in the demo. Each location is packed with multiple stages to ride through, all of which look fantastic and are full of life. The levels have fully detailed and deep backgrounds, which makes it at times feel like this is a fully 3D bike game where you can ride into the background and almost forget that this is purely a 2D game.

In the game you can to pull off insane stunts running up ramps, boards, roofs of houses, as well as many other places. While you are riding, jumping, flipping, and more in the environments there is also cash to collect cleverly hidden in the levels. Cash with which you can upgrade and customize your bike and appearance.

While there wasn’t a lot of customization that was unlocked in the demo of Urban Trial Freestyle 2, kudos to the developers for putting as much as they did in the demo. Not only can you play through four stages of one of the levels, but you can do so in both time attack and stunt modes, but you can also actually collect some of the hidden cash and redress your rider. You can also look deep into what you can customize as well, even if you can’t actually unlock them in the demo.

The game also comes with a level editor so you can customize your own crazy stunt levels. Not only that, but you can also share them online and download the levels from others to try out as well. While this isn’t available in the demo it does look like a lot of fun.

While the game does feature worldwide leaderboards, two things that are definitely missing in the game is multiplayer. The game is a single player affair only and supports neither online nor local multiplayer. You can unlock the ability to display ghosts in the game, which is something at least. It can’t be unlocked in the demo.

The game also doesn’t support sharing screenshots on Miiverse, which would have added something to the hype of creating custom levels.

Once you get a feel for controlling your dirtbike the game is a lot of fun, and so is watching some of the crazy and funny wipeouts that can happen.

Urban Trial Freestyle 2 is definitely worth checking out. The game retails for $9.29 CAD and is rated E for Everyone.