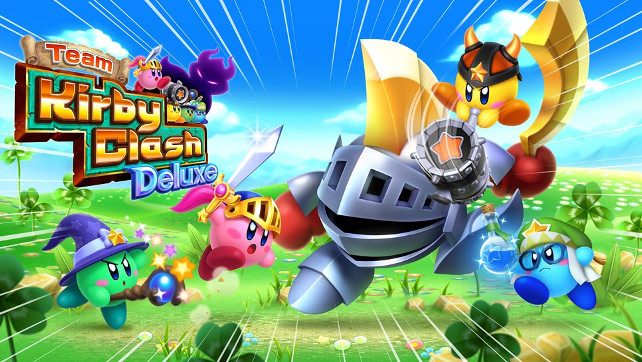 Nintendo released a surprise title when they held their latest Nintendo Direct on Thursday afternoon. That surprise title is the free-to-start game for the Nintendo 3DS eShop in Team Kirby Clash Deluxe. The game is a very simple to play game that seems to offer a lot of depth on the surface, but isn’t really that deep of a game.

The game is a side scrolling battler where you can choose to play as one of four characters: Kirby, Kirby, Kirby, or Kirby. You must unite in the game with up to three other Kirbys to do battle in this free-to-start multiplayer action game. While you can only choose from Kirby as your battler of choice, you do have four classes to choose from to make your Kirby your own. Are you a Sword Hero? Hammer Lord? Beam Mage? Or Doctor Healmore?!

In the game you will take on bosses, level up, and try out new challenges. 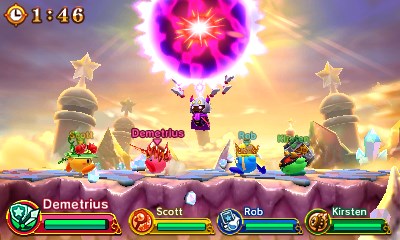 Each character class offers up a different way to play and a different strategy. Puff up your power by crafting new weapons and spending materials at the shop to receive even more weapons, armor and useful pre-battle items. If you have save data from Kirby: Planet Robobot you’ll be able to get both a special weapon and a piece of armor at the Shoppe. These can be purchased from the in-game shoppe, where you will spend the shards you receive form completing battles as well as gem apples (the premium currency).

Since this is a free-to-start game which will cost you $0.00 to download in the eShop, the premium currency is where the game will make money for Nintnedo. However true to form for the big N, spending real money on gem apples is neither required not heavily suggested in the game. There is a tree in the square which will grow five gem apples every 12 hours, so you can pick up to 10 gem apples a day. And if you do purchase gem apples from the eShop, purchasing 50 gem apples will make your tree grow more apples every day. 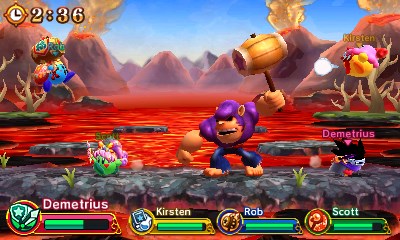 As you play thru the boss battles you will earn experience and level up your Kirby. As with all role-playing games this improves your stats and makes you a more formidable Kirby. You will earn crystal fragments after completing the levels, which varies depending on the level. You will need these fragments, along with gem apples, to purchase weapons, armor, and items from the shoppe. As an added incentive to play the game daily, you will also receive a bonus on specific fragments won depending on the day of the week.

You can also get an added boost of fragments by tapping amiibo into the game. All amiibo are compatible with the game and you can tap up to five per day.

Gem apples are the main focus of the game however. You’ll need them to not only purchase things in the shoppe but also to unlock new levels. As you progress some levels which appear must first be unlocked by spending gem apples. Depending on the type of player you are you can wait to gradually collect enough gem apples to unlock the levels or buy them from the eShop. 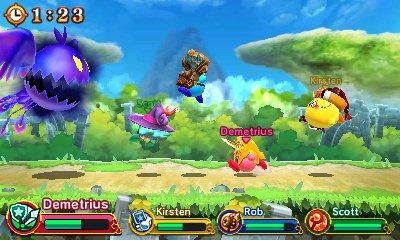 Aside from waiting for the gem apples to grow, or purchasing them from the eShop, you can also get them by completing challenges like beating the boss while using a specific job class, completing the level in a set amount of time, or getting a specific medal reward for completion. The challenges can be completed only once.

The battles themselves are pretty straight forward and nothing flashy. The game makes good use of the environment by having the enemy and attacks periodically go between the foreground and background to add to the challenge. The Kirbys are locked to the 2D battle plain. The battles themselves aren’t too difficult over all. When your Kirby is downed he can be revived by one of your teammates and you’ll only really lose the battle all four Kirbys are downed at the same time … or if you run out of time in the battle. You only get 3:00 to beat the level, which can be easier said then done at times.

Leveling up and getting better gear is essential.

Team Kirby Clash Deluxe also makes use of StreetPass. Adventures who you meet in StreetPass may bring along some fragments for you and you can embark on quest with them for a few quests, which is handy if they’re a higher level than you. The game also lets you connect to the internet to summon wandering adventurers, who will also do the same. 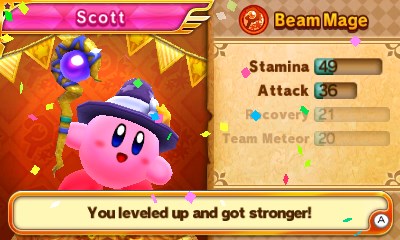 By default in the game, much like most other free-to-start games, playing through battles will cost you stamina (or vigor in this game). Battles take a varying amount of vigor, which recharges one point every seven minutes. You can purchase an item in the Shoppe which will decrease that recharge time to five minutes.