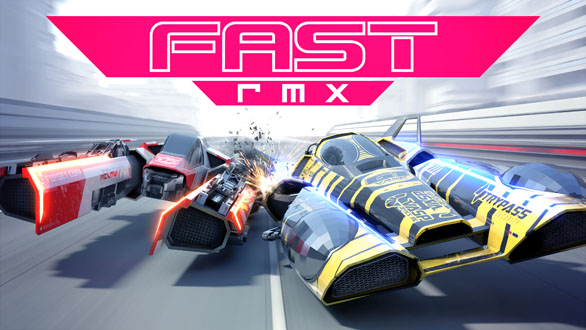 There was something magical about going into an arcade in the 90s. Seeing the latest racing games all lined up with amazing graphics and blistering speed. It was just the sort of experience you couldn’t get at home on a console. As the years have gone on we’ve had games like that arrive in living rooms. FAST RMX has the visuals and the speed that really give you that rush of playing an arcade hit. It’s a futuristic joy ride with a few twists to keep things interesting.

You may not be familiar with the FAST series if you don’t poke around on the eShop much, but with FAST RMX being a launch title on the Switch, it definitely shines a spotlight on this gem. I personally hadn’t been aware of the series myself and my first experience was at a Nintendo Switch press event in January. Out of everything there it was one of my top games for the new system. Thankfully since then I’ve had the chance to try it out more and it really is a fantastic racing game! 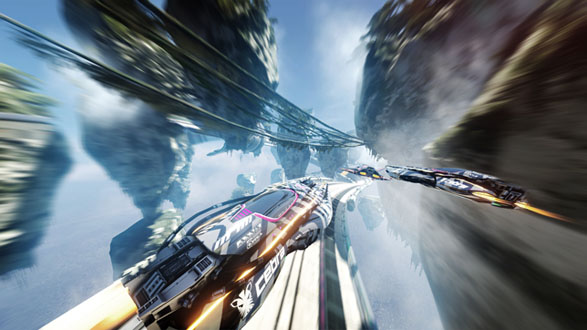 First off, I was surprised this wasn’t a physical release. The Switch event left me so dazzled with FAST RMX’s beautiful graphics and a staggering 30 tracks, six of which are new since the previous Wii-U FAST title, I figured it must be an in store purchase. After contacting a few of our PR reps, and probably looking like a dork in the process, I learned it was surprisingly a download only eShop title. What’s more, it’s only $19.99 USD! Twenty bucks! Two racing modes, three cup circuits per mode, and ten championships cut up into three races each. Again, thirty tracks!

Even though FAST isn’t new, it’s gimmick fits in perfectly on the Switch. As you race around the track in an intense battle for first place, you can phase switch between two different colored afterburners, orange and blue. If you hit the same colored strips on the track, or even other things like beams pouring out of a hovering UFO, you get a speed boost. You can phase switch at the press of a button. Also along the track are colored orbs to collect. Those fill up your boost bar which lets you either tap for a short boost, or hold down the boost bumper to use a continuous flow of fuel.

The tracks are actually quite detailed and varied as well. So it’s not 30 tracks of similar content. In a way some of it feels like Sonic & SEGA All-Stars Racing, which is a fantastic thing. One track has you careening through a glass tunnel under the ocean at one point, another has you hovering between track sections while asteroids crash about in space, even others feel like racing through Jurassic Park in a rainstorm, just without the dinosaurs. There are other hazards however, like spider robot things, energy beams, spinning fan blades, and more! It’s not all uniform either. Some tracks don’t even have barriers on some sides and you can speed right off into the desert off-road to crash among the rocky rubble. Others still are cylinders you race along throughout the track. The variety is fantastic and for the admission price it’s ridiculous what you’re getting here in a VERY good way. 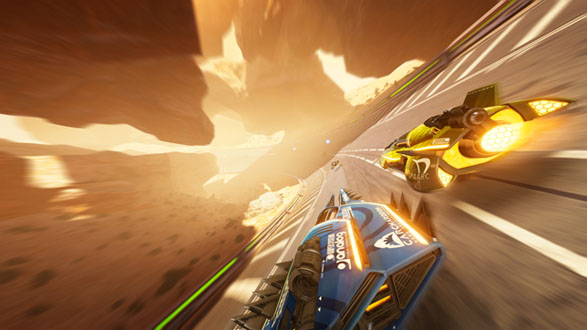 If the different circuits still aren’t enough of a challenge for you, there’s hero mode! This vicious setting lets you take on any singular track you want with a few requirements. To begin with, you need to come in first. Secondly, your boost is also your machine’s shield bar. So if you drain all your boost, you’re toast. Unlike championship mode, once you fail, the race is over.

The soundtrack is awesome as well. Somewhere between electronica and almost dubstep at times I’d say is where it falls. Destructoid even noted that there were almost 50 music tracks to the game! All that and thankfully the game is under a gig! It’s just 900 MB. A great racing game and it isn’t going to clog up the memory on your Switch!

The only down side I found was that using seperate JoyCon’s isn’t really a suitable way to try and play an intense racing game like FAST RMX. It can be done, and to do their credit Shin’en did a good job with the control scheme. However the tiny size just doesn’t work for it. I can see playing platformers and the like on the JoyCons but if you’re going to play FAST RMX multiplayer, you’ll probably just want a second controller. We tried out local multiplayer splitscreen and it was enjoyable. Just not too comfortable with the seperated JoyCon controllers. 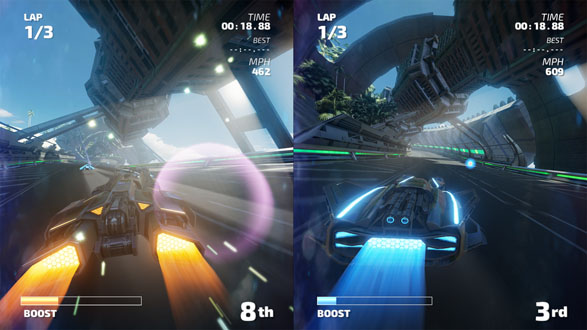 As with all Nintendo Switch titles, FAST RMX is wonderful in handheld mode. The Switch’s screen is bright and vibrant and you feel absorbed right into the racing action in your hands. I enjoyed it this way, but I prefer FAST RMX on the big screen so I can take in more of the beautiful visuals Shin’en has put into these awesome tracks! But being able to take FAST RMX with you on the go is an excellent plus.

Fans of over the top sci-fi racing should definitely pick up this title! I’d love to see Shin’en Multimedia expand these games further with even more play models or maybe even mirrored track modes. It really does deserve to be much bigger than what it is. On the bright side, being a Nintendo Switch launch title may be just the publicity FAST RMX needs to bring it up into the AAA category. I’m not exaggerating, this game is solid. Your first few races you may smack off the walls like crazy but as you learn to use the triggers to slide around turns smoother and get used to the placement of color phase boost strips. If you have a Nintendo Switch, you should be playing FAST RMX. I know I love it!